Women’s stalled march to the top?

You might sell books with declarations like this – “the outcome of the gender wars, if wars they were, is clear: women won” – but that’s not the story Matt Huffman, Stefanie Knauer and I tell in our just-published article in the journal Work and Occupations, “Stalled Progress? Gender Segregation and Wage Inequality Among Managers, 1980-2000.” We must have gotten distracted by some of the facts.

The story about women’s movement into positions of managerial authority is mixed.

1. Women’s entry into managerial jobs was rapid in the 1980s, and stalled markedly in the 1990s and into the 2000s. Three measures of female representation confirm the basic pattern of a stall, either at about 35% or 45%: 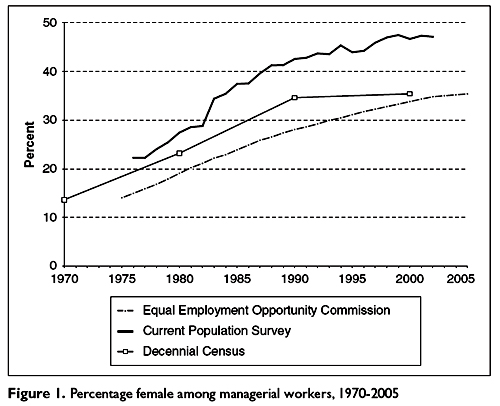 2. The segregation among managers increased in the 1990s. That is, when you break down the different managerial jobs – such as managers in day care centers (94% female in 2000) or parking garages and carwashes (5% female) – women were integrating new jobs in the 1980s, but in the 1990s they became more concentrated in the same jobs. We measured this segregation three different ways and got the same result. That’s too bad for them, because…

3. Holding constant age, race, education, family structure, etc., the more women there are in a managerial job, the lower the pay. On the bright side, paradoxically…

4. The overall gender earnings gap among managers shrank in the 1990s. However, although we can’t be sure yet, we suspect this was because all those new managers hired in the 1980s gained experience and improved their earnings relative to men, and the influx of lower-paid junior managers slowed.

In the end, we echo the summary Jerry Jacobs offered nearly 20 years ago, that “female managers have a long way to go,” and we conclude: “our results strongly suggest a dramatic slowing of progress for women in managerial occupations.”

Filed under Me @ work, Research reports

3 responses to “Women’s stalled march to the top?”