A new report from UCLA’s Center for Health Policy Research, based on 2007 data from California (before the recession), shows a clear income-health gradient among non-elderly women. Using income-needs ratios relative to the poverty level (which controls for family size and composition), those with low incomes are four-times as likely to report fair or poor health than those with high incomes. Poor women also report more physical disabilities, and disabilities that limit their ability to perform daily self-care tasks. 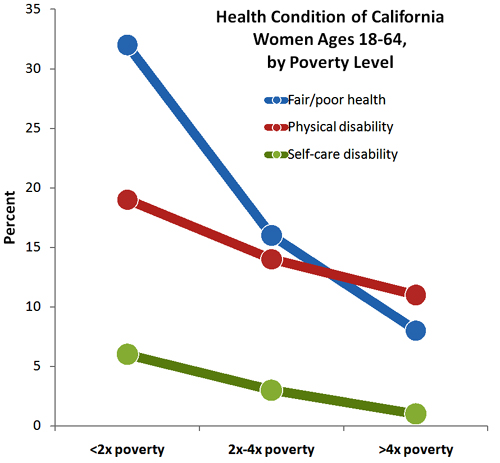 Source: My graph using data from the report.

The report also shows poor women are less likely to have insurance, a regular source of medical care, or to receive preventive screening such as mammograms, and more likely to experience psychological distress.

The income health gradient is very common, a consequence of the many injuries suffered at the bottom of the social class spectrum in modern societies. It’s found, for example, among British and American men, according to a 2006 NBER paper, finding:

a steep negative health gradient for men in both countries where men at the bottom of the economic hierarchy are in much worse health than those at the top. This health gradient exists whether education, income, or financial wealth is used as the marker of one’s SES status. These conclusions are maintained even after controlling for a standard set of behavioral risk factors such as smoking, drinking, and obesity and are equally true using either biological measures of disease or individual self-reports.

If adult men’s health behavior doesn’t explain the income health gradient, maybe it results from the health behavior of pregnant mothers, which affects early child development. Not so, apparently:

Almost uniformly, higher income and education are associated with pregnancy conditions and behaviors known to promote healthier pregnancies and healthier babies. These variables do not explain the relationship between family income and maternal-assessed health status of the child on a five-point scale, however.

Some of the pattern seems to be intergenerational, but the exact mechanisms are not yet clear (to me, at least). Education plays a role, at least in part through its effect on better management of health conditions. Much of the research implies the relationship could run both ways – with health affecting income as well as income affecting health. For example, new research shows unhealthy people are much more likely to delay medical care, or not receive it at all, because of the cost.

That’s just a smattering from a deep and rich topic, with heavy implications for the current U.S. healthcare debate as well as broader inequality issues.