More evidence that the recession is having large-scale effects on family life.

The birth rate dropped in the U.S. from 2007 to 2008, for all age groups of women except those 40-44. So why is the Centers for Disease Control press release headlined, “Teen Birth Rates Drop in 2008 Following a Two-Year Increase”?

In case the significance of the news was not clear, Stephanie Ventura of the National Center for Health Statistics told the Washington Post, “This is good news.” Really?

However, there is something interesting in the latest data, and it’s not necessarily good news. According to a nice analysis by the Pew Research Center, including my old friend Gretchen Livingston, this most recent birth rate decline seems to be driven by the recession.

I took the liberty of adapting one of their tables into the following chart, which shows the relationship between the 2007-2008 change in per-capita income and concomitant change in the birth rate (births per 1,000 women 15-44). The larger states are shown with bigger dots, and the trend line is plotted, showing a strong association: 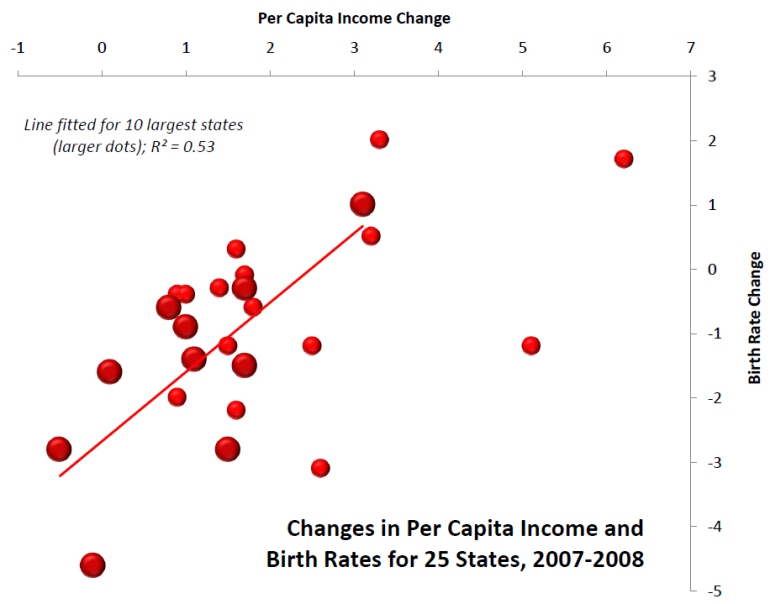 Chances are this will not lead to a large decline in lifetime fertility for today’s families — more likely a stall that most women will make up for down the road (which could be why 40-44s are the one group that doesn’t show a decline — less time for timing). For the same reasons, ironically, divorces may be taking a breather as well.

Like fertility and divorce, the increase in family violence during the recession might not be enough to overcome long term trends. But as we start to wrap our heads around the long term consequences of this crisis, which outstrip those of recent business cycles, family changes are an important part of the story.