The women of Wal-Mart may be closer to a settlement in their mammoth sex discrimination suit. Reports NYTimes:

In a closely watched case, a sharply divided federal appeals court on Monday ruled 6-5 that a sex discrimination lawsuit against Wal-Mart could proceed as a class action for more than a million women. The suit is the biggest employment discrimination case in the nation’s history.

I’ve used the case to teach about sex segregation and discrimination for several years, partly because of the excellent and accessible reports done by their experts, including Richard Drogan’s statistical analysis and Bill Bielby’s analysis of the company’s personnel policies and practices.

It’s a textbook case, so to speak. From Drogan’s report, fewer and fewer women as you move up the chain of command: 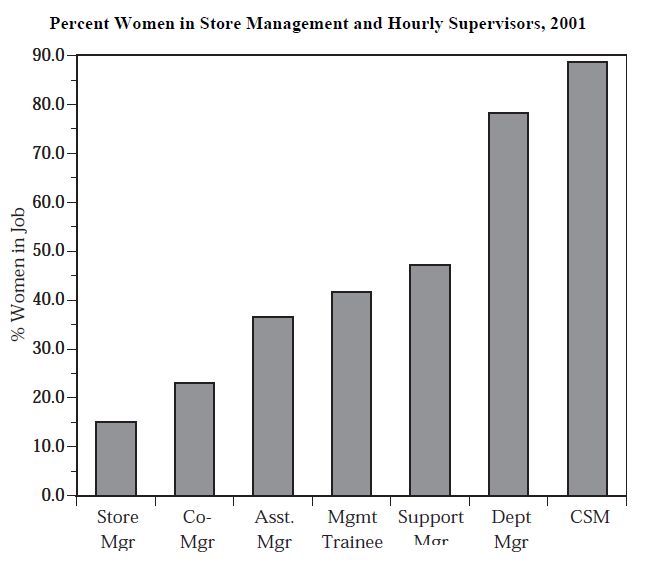 [S]ubjective and discretionary features of the company’s personnel policy and practice make decisions about compensation and promotion vulnerable to gender bias.  In addition, I have concluded that there are significant deficiencies in the way the company monitors its personnel policies and practices, establishes diversity goals, and evaluates managers’ contributions to equal opportunity objectives.  Personnel policy and practice at Wal-Mart as implemented in the field has features known to be vulnerable to gender bias.  Discretionary and subjective elements of Wal-Mart’s personnel system and inadequate oversight and ineffective anti-discrimination efforts contribute to disparities between men and women in their compensation and career trajectories at the company.

Allowing the case to proceed as a class action increases the potential costs to the company astronomically, increasing the odds they’ll settle.

The new decision is here.