The culture wars are all fun and games until someone’s mental health is damaged. Here’s new evidence that’s what’s happening.

In the 2004 election cycle 16 states passed amendments banning homogamous marriage (two of those were in 2005). Fortunately, the National Epidemiologic Survey on Alcohol and Related Conditions had conducted a large survey in 2001-2, and then followed up with the same respondents in 2004-5, including a question on sexual orientation. The sample was large enough (more than 30,000) to capture a substantial group of gay, lesbian and bisexual adults in both the states that did and those that did not pass anti-gay amendments. Researchers writing in the American Journal of Public Health reported: 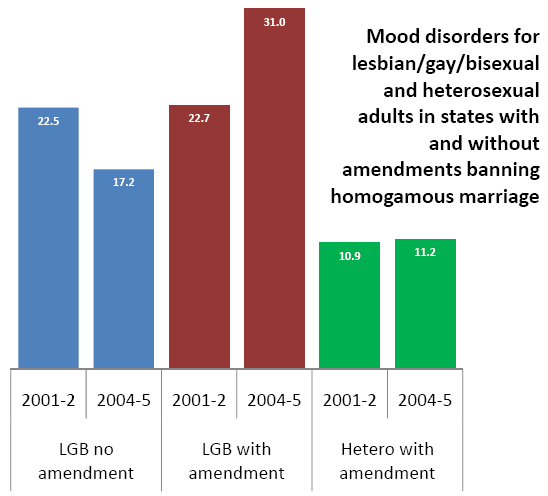 Source: My chart from the article. (Numbers are percentages with a mood disorder.)

The authors can’t prove the amendments (and the anti-gay/lesbian political agitation and climate leading up to them) caused the worsening of mental health, but it’s not a bad hypothesis — especially given evidence that discrimination experienced at a personal level has negative mental health effects.

2 thoughts on “Institutional discrimination is bad for mental health”