When, if ever, did this ship get turned around?

After I commented on Time‘s story about young women earning more than young men, Editor-At-Large Belinda Luscombe was good enough to drop in with her comment on my comment. Our exchange led me back to look at the story, and that led me to tinker with the data. And so here we are.

I have three principal beefs with the Time story. My take and some numbers follow.

1. Juxtaposing the overall gender gap in pay with the female advantage among a small slice of the population, and titling the story “At Last, Women on Top.”

Because of the fixation on single numbers, we’re doomed to reflect everything against “the” gender gap, which shows that, as of 2009, full-time working women earn an average of 80.2% of men’s earnings. So Time wrote:

The splashy that some women out-earn men. But the evidence that followed was not about all full-time working men and women, but rather only unmarried workers in the age range 22-30 who have no children and live in large cities — they out-earn similar men by 8%. That could be important. But what does it have to do with “the” gender gap? Even for these women, as Heather Boushey pointed out, what about job segregation and promotions (not to mention child and marriage effects, which really matter).

2. Conjuring a trend from one point in time compared with a presumption about the past.

The story did not reveal a trend, but rather a snapshot of a trend presumed to be in progress. Given what we know about lagging progress toward gender equality — which might or might not be unstuck by the mancession — we should not assume that today’s fact is part of a wave of continuous progress in the direction of equality.

3. Relying on an unpublished analysis by a marketing firm without questioning its assumptions or conclusions.

In this day and age, and with all the corruption going on, who’s got time or patience for peer review? I am definitely not saying that you need a PhD in a relevant social science and your own blog to have something valuable to say on this subject. But this is a well-studied issue, and lots of experts are available to consult, interpret, or critique a splashy new finding — such as those who recently commented for a similar article in the New York Times, or experts on discrimination issues.

Peer review may be a boring system for ensuring conformity to arcane standards while protecting the privileged status of pampered intellectual elites. But those standards encourage researchers to follow common practices and reveal the details of their work, which makes it possible for others to replicate and explore it.

But is the finding important? Time‘s expert attributed this subgroup of women’s advantage “overwhelmingly to one factor: education.” The education explanation was persuasive to Boushey, who wrote: “That’s what the Reach Advisors study shows—that because there are more young women with college degrees, women now outearn young men.”

In that case, education should have been considered in the analysis. I do that a little now. First, women started receiving a majority of four-year college degrees 30 years ago, and female college graduates have been outnumbering men in the 25-34-year-old age group for 20 years: 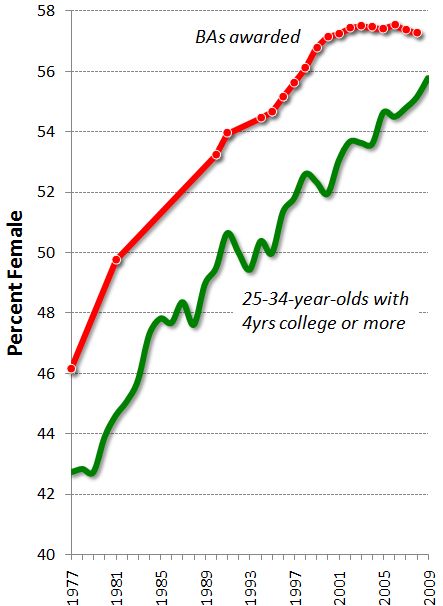 Source: My graph from Census and Department of Education data.

So, if it’s just more women having college degrees (having exempted all those with messy family issues holding them back), then we might expect that the gender-gap “ship” actually started turning around a while ago.

When I complained to Belinda Luscombe that “there is nothing in the story to show that this narrow subsection of workers hasn’t always shown a female advantage,” she replied: “are you really suggesting that it was ever thus and young women have always out earned men?”

I never say “always” (though I always penalize students who do). But look at this: 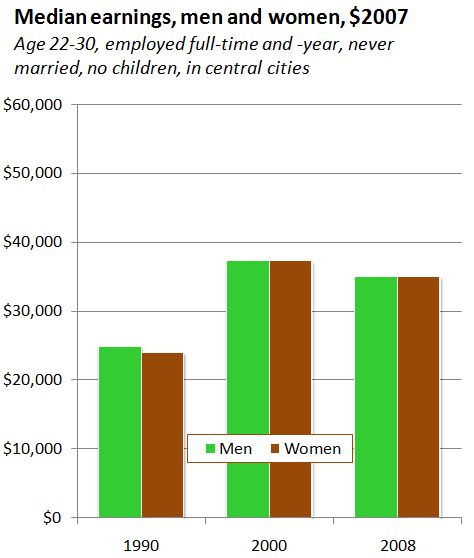 Source: My analysis of data from the 1990 and 2000 Decennial Censuses, and the 2008 American Community Survey, provided by IPUMS.

Sure enough, the median earnings for men and women in this odd, unrepresentative slice of the population have been basically equal since at least 1990. So, maybe Time should have done this story 20 years ago.

I can also provide a little support for the education hypothesis. If you take those same samples, but throw out the people who didn’t finish at least 4 years of college, the graph looks like this:

Source: My analysis of data from the 1990 and 2000 Decennial Censuses, and the 2008 American Community Survey, provided by IPUMS.

So, if the female advantage Time found really results from women having more education, the bad news is that the gap among those with college education hasn’t closed much (which could have to do with the stall in gender integration by field of study).

Because the overall gender-gap among college-graduates aged 25-34 is about 81%, these women are doing better relative to men than average college graduates. Why? In the end, I don’t believe the ship has turned around. The main reason is probably the selection of men and women who’ve never married and have no children — the “maternal wall,” as Joan Williams calls it. Is the plan for equality to “die childless at thirty“?

But I don’t much stock in the premise (can’t you tell?). If you’ll pardon me while I put on my demographer’s hat, I am especially concerned with the changing nature of who is in this odd group. People getting advanced degrees — increasingly common over recent decades — are mostly not working full-time till they graduate, so many of them are excluded from this under-30 group. And the age at marriage has increased. And marriage is more common among women than men at young ages. And what about race/ethnicity? Marriage is especially uncommon among young Black women, and young Black men have relatively low average wages (which drove the advantage for women in the NYC study).

And so on. So I don’t want to go too far down the road of explaining this (as if I haven’t already). Because this approach is wrong. We shouldn’t derive an unusual pair of comparison groups and then try to explain the comparison by referring to other facts not in evidence. If you really want to see the relative effects of education, age, marital status, children, race/ethnicity, and so on, you need to do it right.