Have you said “homogamy” today?

The latest issue of the Journal of Family Theory and Review is out. A young journal, in only its third volume, it’s well worth a look. For example, the current issue features an interesting debate on gender display and housework between Oriel Sullivan, Esther Kluwer, Barbara Risman and Paula England.

But the big blog news is that the issue also includes “Homogamy Unmodified,” in which I write:

I propose that homogamy and heterogamy be used to signify same-sex and opposite-sex unions, respectively, including marriage and cohabitation. This is intended to address a terminology impasse that has given us marriage versus same-sex marriage in popular and academic usage. After a brief review of the word origins and scholarly uses of these terms, I conclude that the new uses for homogamy and heterogamy could be adopted relatively easily, with scientific benefits for categorization, and could remove a conservative bias in the current usage.

Briefly, my issues are:

I hope you will consider it. Try it out in a sentence. For example:

Update: Here is the Huffington Post version of this post on the “Gay Marriage” news page. No one told me about the big march for homogamy/heterogamy language reform! 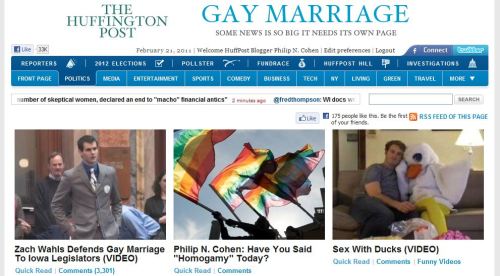 21 thoughts on “Homogamy: Start the presses”