The media pop the question about dating — over and over.

Today’s headline in the print edition of USA Today was, “Is Dating Dead?” Say it isn’t so. Still? 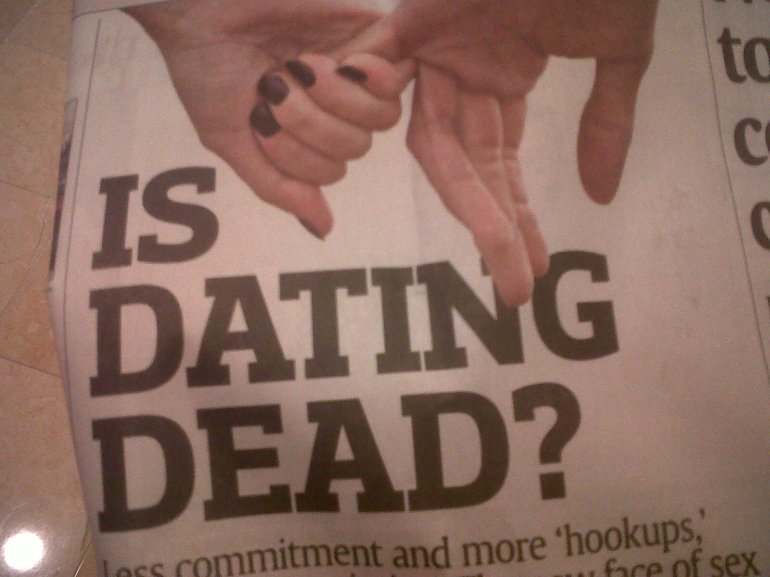 By evening, the online edition just used the subhead, “More college ‘hookups,’ but more virgins, too.” The story includes new information and quotes from a number of sociologists, summarized by this:

The relationship game among college-age adults today is a muddle of seemingly contradictory trends. Recent studies indicate that traditional dating on campuses has taken a back seat to no-strings relationships in which bonds between young men and women are increasingly brief and sexual.

But the pitch had a decidedly familiar ring. The more things change, the more the media uses the same headlines. You could go back to 2001, in the Sun Herald of Sydney, Australia…

If your memory is a little longer, you might recall Maclean’s insightful article in 1995:

Or, specifically on the campus scene, there was this in the New York Times, March 26, 1989 — almost exactly 22 years ago:

In Beth Bailey’s 1989 history, From front porch to back seat: courtship in twentieth-century America, she says the “dating system … flourished between 1920 and 1965.” So we’re approaching the 50th anniversary of its original demise.

(I confess, I mocked up the Sun Herald and Maclean’s versions from text retrieved through Lexis-Nexis.)

11 thoughts on “Is dating still dead?”