My friend Danielle pointed me toward this graph from Michelle Malkin‘s blog yesterday. (I never heard of her, so I’ll use her identification: “mother, wife, blogger, conservative syndicated columnist, author, and Fox News Channel contributor.”)

For Malkin, this is evidence of “the Obama FoodStampCorps’s mission to enroll countless more food-stamp beneficiaries.”

From her own link trail, it looks like Malkin may have gotten the graph here, though in an earlier post she linked to a version here, so who knows. Trying to find the real source of it, I quickly discovered that it has been posted dozens, maybe hundreds, of times in different versions as new monthly data become available.

So this is the first case report on a food stamp spike graphic meme. Until I can examine a live version I won’t know for sure, but it seems to trigger a proto-oncogene that is carried on the conservative cultural-chromosome. (It comes with commentary like this: “Worst. Economy. Ever. Also, not coincidentally … Worst. President. Ever.”)

The graphic is usually credited to the Supplemental Nutrition Assistance Program (SNAP), to USDA or both (as in this above example). But although SNAP publishes these data, I don’t believe SNAP produced the figure. Conservative bloggers attribute it to SNAP, presumably because whoever makes the graph puts that label on it, but they don’t say where they got it.

If someone else can trace this, I would love to know who produces it. Clue: the file is often called something like “food-stamps.png”. You can see a lot of them by image-Googling this: [food-stamps.png snap “food stamp participation“]

Anyway, the obvious problem is classic x-and-y axis truncation, which we’ve seen before. The lowest point on the chart is 26 million, and the earliest point is in 2007. The same source includes data back to 1969, so it’s easy to widen the angle (using years instead of months): 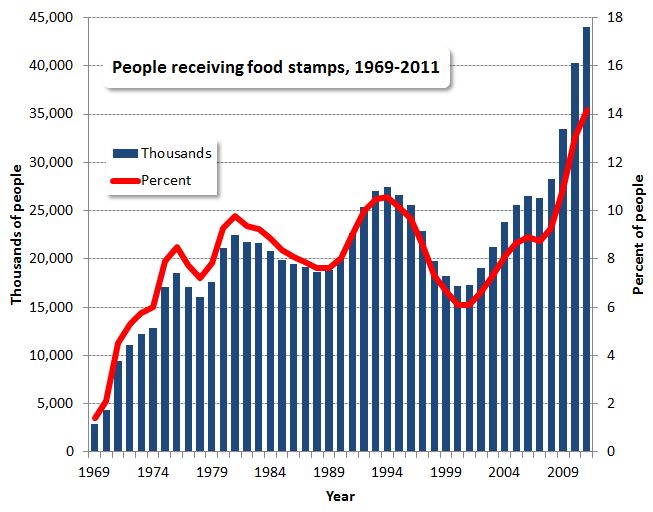 The x-y distortion is what gives the meme its distinctive appeal to the conservative cultural-oncogene, which strongly favors simple linear forms. The meme’s molecular structure allows it to snap into what is normally a relatively-harmless gullibility gene, triggering uncontrolled replication. Here’s an illustration:

Showing the additional ranges on the graph doesn’t change the fact that Food Stamps really is serving a record number of people, and a record percentage of the population. The situation is dire, and of course has gotten worse during Obama’s term.

Partisan-wise, however, the wider graph shows that Food Stamp rolls increased by almost 11 million under President Bush, rising in all but one year of his presidency. So after the 2001 recession, unlike the previous two recessions, there was no major fall back in participation. By the end of Bill Clinton’s term, in contrast, Food Stamp numbers were back down below where they had been in the 1980s.

With its simplistic storyline, welfare-state target, and official-source labeling, this graphic meme is well-adapted to its host environment: gullible, mean-spirited members of the blogosphere’s conservative echo chambers.

The simple blog post I have laid out here might be able to block the successful replication of the meme, but prospects for producing a delivery system capable of reaching the target are bleak in the absence of corporate funding for research and development. Like other promising cures, it may never see the clinical light of day.

Sheesh. I think I need a vacation.