The Empire State strikes back.

S 10-A. Parties to a marriage. 1. A marriage that is otherwise valid shall be valid regardless of whether the parties to the marriage are of the same or different sex. 2. No government treatment or legal status, effect, right, benefit, privilege, protection or responsibility relating to marriage, whether deriving from statute, administrative or court rule, public policy, common law or any other source of law, shall differ based on the parties to the marriage being or having been of the same sex rather than a different sex. When necessary to implement the rights and responsibilities of spouses under the law, all gender-specific language or terms shall be construed in a gender-neutral manner in all such sources of law.

Gov. Andrew Cuomo immediately signed it, starting the 30-day clock on implementation. Note also that the law has the same effect regardless of whether the parties to the signing ceremony are of the same or different sex: 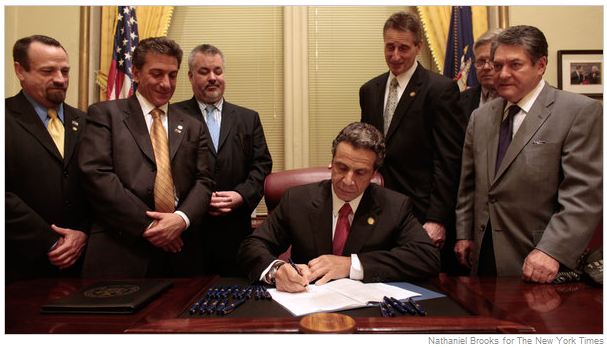 Since the law does not require in-state residence for a marriage license, residents of any state can go there to get married, unlike the other states that permit homogamous marriage (Connecticut, Iowa, Massachusetts, New Hampshire, Vermont and Washington, D.C.).

But, gay marriage is not an appropriate term for the law, since the it doesn’t – and the law never did – specify the sexual orientation of anyone getting married. Lots of people of all sexual orientations married under the old laws – they just couldn’t always marry the person they wanted to.

And, same-sex marriage won’t be OK if it’s just juxtaposed with marriage, as is the common practice.

Of course, marriage is a fine term when there is no need to differentiate further.