…and when did I get so touchy about it?

When someone gave us this chunky dinosaur puzzle, I did a double-take. Yes, that’s a caveman there with the dinosaurs: 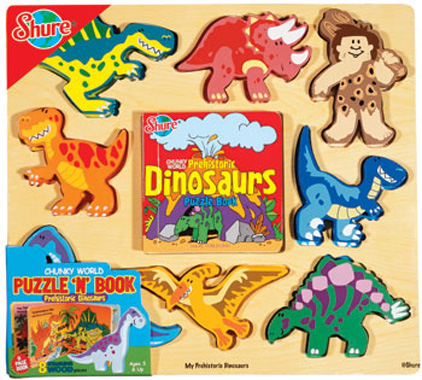 The blurb on the company’s website says that, along with the puzzle, ” The accompanying board book teaches young learners about dinosaurs.” Teaches, that is, with lessons like this: 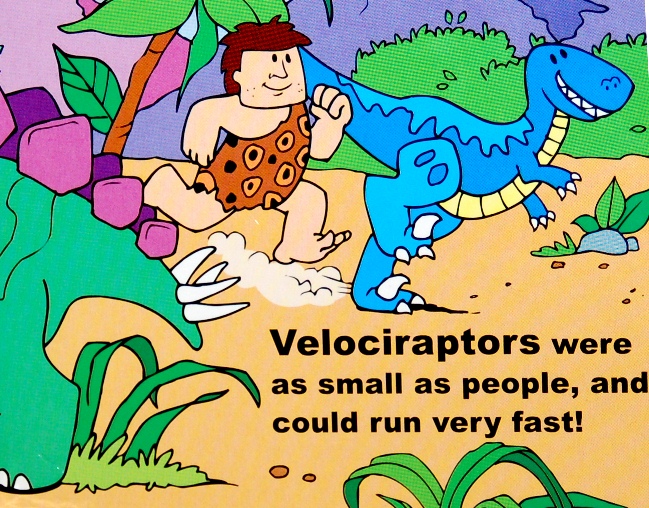 A little harmless fun, or a little creationist indoctrination? (Do sociologists even believe in “harmless fun”?)

According to the Shure company, they deliver these “common threads” in all their products: “Originality and inventiveness; Excellence in design; Attention to detail; Exceptional quality; Educational merit.” So, not just entertainment.

A quick perusal suggests the rest of their products are not creationist — just the usual toy-gendering. They do have a Noah’s Ark puzzle, but it doesn’t claim to be educational. In that Shure is just keeping up Melissa & Doug (whose puzzle is at least Genesis-correct in not naming Noah’s wife): 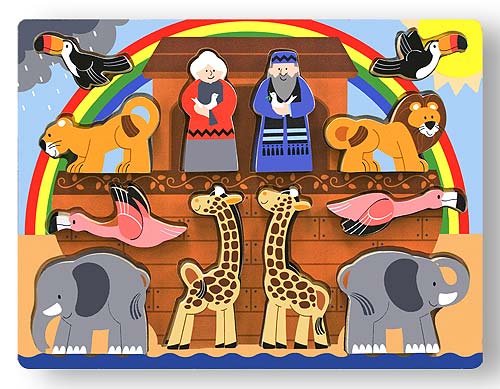 And anyway, the story of Noah’s Ark is actually not a bad way to talk about reproduction.

But back to dinosaurs and people. Dinosaurs are not really more problematic for creationism than any other creatures that pre-date humans. But maybe because kids love dinosaurs so much, creationists spend inordinate energy trying to place them chronologically with people. Writes one such site:

The idea of millions of years of evolution is just the evolutionists’ story about the past. No scientist was there to see the dinosaurs live through this supposed dinosaur age. In fact, there is no proof whatsoever that the world and its fossil layers are millions of years old. No scientist observed dinosaurs die. Scientists only find the bones in the here and now, and because many of them are evolutionists, they try to fit the story of the dinosaurs into their view.

Up against this kind of propaganda, it is tempting to bring the hammer down on “harmless fun” featuring humans and dinosaurs playing together. That would mean none of these, either: 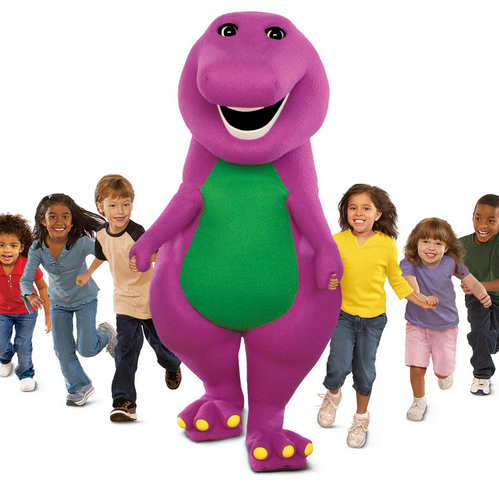 That is basically the argument of James Wilson, a University of Sussex lecturer, who has a talk on the subject here on Youtube.

For non-biologists, like me, who like evolution and want some ammunition to defend it, I recommend Richard Dawkins’ recent book The Greatest Show on Earth. Some do find it a little dogmatic, and in the grand scheme I prefer Stephen Jay Gould, but it’s good for this purpose. Because rather than block access to dinosaur cartoons, I would rather arm myself – and the surrounding children – with the tools they need to handle them with confidence.