New evidence against my earlier views.

Last year I cited a study of abusive head trauma in children which showed marked increases in four cities after the start of the recession (that was a conference paper that now has been published in Pediatrics). That followed a list of evidence supporting the idea that economic recession was increasing violence within families, from local intimate homicide rates and domestic violence court backlogs to social service reports and many news media anecdotes, along with general evidence that unemployment increases violence.

Since then, a 2011 review published in Sociology of Crime Law and Deviance reports that evidence for recession effects on intimate partner violence are weak at best, so there is no reason to expect an increase to show up when the data on this recession is put together. And now the latest data from the National Crime Victimization Survey shows a sharp drop in relationship violence against women in 2010: 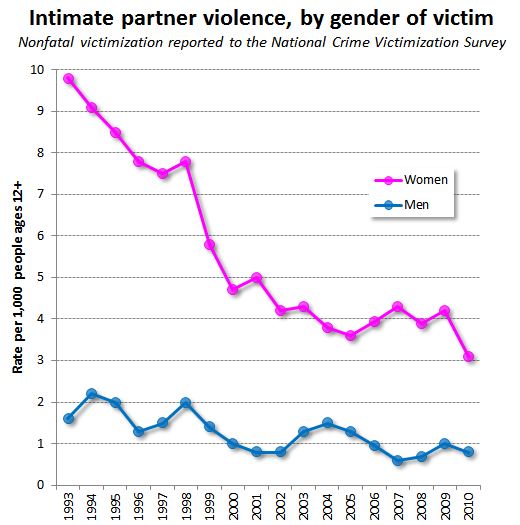 But this is hard to evaluate because — as with divorce — it’s part of a long-term declining trend. To put that declining trend in perspective, I lined it up with the trends for violent crime, and the subset of serious violent crime. Showing these as percent changes, they are all following the same general trend. If anything, the decline in intimate partner violence against women has slowed relative to the others since 2007, which could be a sign of recession-related violence: 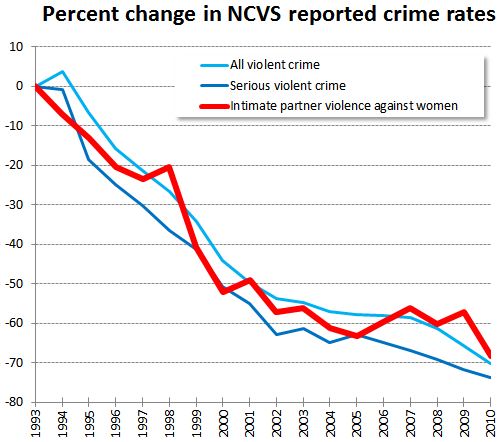 Finally, there is the problem of dating the “recession” to identify its effects. How to do that partly depends on what aspect of the the economic crisis you think might be affecting family violence — unemployment, home foreclosures, social service cuts, and so on. This has been dragging on long enough that we could assemble evidence in different directions several times. Here’s a final example: domestic homicide rates in New York state, which came out last month. 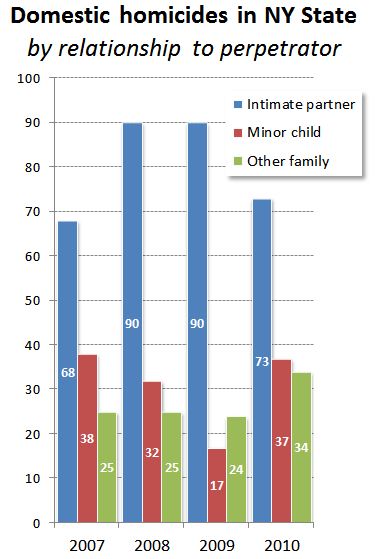 In short (not short enough), I’m not as convinced as I was that the recession has increased the level of violence over what it would have been otherwise. So, although there are sure to be many acts of violence triggered by the crisis, I recommend skepticism about broad conclusions on overall trends.

8 thoughts on “Has the recession increased family violence?”