Stop me when you’re convinced women own more than 1% of all the world’s wealth.

There is a real problem with this women-own-just-1%-of-all-wealth thing. It’s not just that it represents a failure of education in the areas of ballpark-demography and statistical critical-thinking. It’s that people who fall for it aren’t realizing how rich the rich countries are — including the women in them — in the global scheme of things. Like I said at the beginning of this, if global feminist unity is to be had, it won’t be built on a shared poverty experience.

Since people keep asking, I decided to give up on the argument that this needs no refuting, and spend an hour proving it can’t possibly be true, that it must be off by large orders of magnitude. (Well, it was an hour to find the data, but working it all out took a little longer.)

If you need to catch up first, these are the posts in this series so far:

Claim: Women own 1% of all property in the world

This is the original claim from the editor’s introduction to the journal World at Work in 1978. And according to the rationale later written by that editor, Krishna Ahooja-Patel, the number was derived from a (dubious) estimate that women earned 11% of income, and therefore “they do not normally have any surplus to invest in reproducible or non-reproducible assets.”

Various people have since changed “property” to “land” or even “titled land” — never with any research that I have seen — I guess to make it seem more reasonable, but it’s clear from this context that the original claim was about total assets, or what is normally called wealth or net worth.

Debunking strategy: Find a small group of women who own more than 1% of world wealth.

This is much simpler than trying to estimate the actual share of world wealth owned by women. If any small group of women owns more than 1%, that should put the matter to rest. (Dream on.) If someone else can figure out the details for all the other women in the world, that would be great.

I decided to figure out the wealth owned by single women in the U.S. That’s because U.S. data are pretty good and available, the women are pretty rich (in the scheme of things) so they’re likely to satisfy the goal, and single women are simpler because you don’t have to worry about shared wealth. (If married men and women share their wealth equally, the whole women-own-1% thing is obviously impossible, and anything else requires a rule for arbitrarily separating husbands’ and wives’ wealth. And for simplicity I set aside the question of government-owned assets, which are arguably part of “the world’s wealth,” too.)

I got that from a National Bureau of Economic Research working paper by James Davies and colleagues. They estimated mean global household per capita wealth in 2000 was $29,738. With a global population of 6.09 billion, that means global wealth was $181 trillion.

Davies et al. have a figure of $144,000 household wealth per person for the U.S. in 2000, which yields an estimate of $40.4 trillion. I believe the basis for that U.S. estimate is the Federal Reserve Board’s Survey of Consumer Finances. The tables there for 2001 show average household net worth was $397,000. With a Census estimate of 108 million households in 2001, that would be $43 trillion, so it’s pretty close. I use those tables for the calculations below because they break it down by household type.

(Before you say these seems too high, remember these are means, not medians, so the very rich are in there too — and the top 100 individuals in the U.S. alone today have about $953 billion, which is more than $3,000 per person right off the top.)

A 2006 paper by Alexis Yamokoski and Lisa Keister, published in Feminist Economics, used the National Longitudinal Survey of Youth (now grown up) to estimate net worth. They found an average of $160,000 per adult, and single women had mean net worth of $63,000 in 2000 dollars. Single women were 17% of that sample, so their share adds up to 7.2% of the total. Their figure is lower per person, but the breakdown allows a reasonable guess of the share held by single women.

Using the Federal Reserve Board numbers is tricky because they didn’t differentiate between single men and single women. Also, they only report on households, not individuals. But using their categories, I can make a good guess. They reported mean net worth of:

If single women had the same net worth as single men, these figures would give them a total of $5.4 trillion. Is that reasonable? In Tamokoski and Keister’s paper the mean net worth of single fathers ($48,000) is about the same as single mothers ($47,000), and among those without children single women actually have higher net worth ($111,000 versus $95,000) — which is not crazy when you consider all those older women widows, and that richer men are more likely to marry (and remarry). So I’ll say women’s net worth is equal to the average for each category.

If that $5.4 trillion is correct, then, relative to the total in the Federal Reserve Board wealth estimate of $43 trillion, single women own 12.7% of all household wealth. 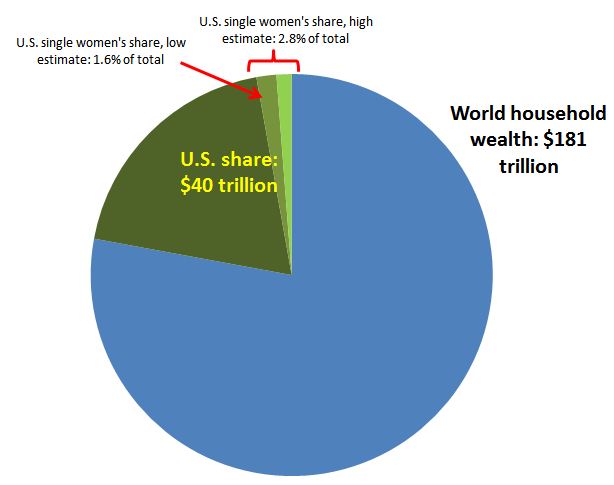 OK, wealth is very, very concentrated. So a sample survey such as the National Longitudinal Survey of Youth won’t catch the very richest people — even if they answered the survey, their numbers would be so extreme as to be considered suspect by the analysts. How big a difference could this make?

There are 42 women in the latest Forbes list of the richest 400 Americans, from Christy Walton (net worth $24.5 billion), down through Oprah ($2.7 billion) to the poorest, Campbell Soup’s Charlotte Weber ($1.3 billion). Together, these women alone are worth $172 billion, which is 0.1% of world wealth — that’s one-tenth of the meme’s total for all women in the world!

Just a little further away, in Europe, L’Oreal empress Lillian Bettencourt is worth $13.4 billion, and BMW heiress Susan Klatten is worth $10 billion. Etc. Yes, women are very underrepresented among the super rich, but the few that there are do a lot to push “all women” past the lowly threshold of 1%.

Can I stop now?