Sometimes I wonder if the National Marriage Project is just gaslighting me.

Did you know that married couples with children spend 50-times more on childcare than single adults without children? Well, if you didn’t you might not realize how good marriage is for “the economy.”

The other day I discussed a bizarre essay and the naive NPR report promoting it. I saved for today the additional contribution in the same Bradley Foundation-funded document by W. Bradford Wilcox and Kathryn Sharpe which claims that, “Strong, sustainable families pay long-term dividends to the entire economy.”

Unsurprisingly, the article provides no information about “strong, sustainable families” or “long-term dividends.” What it does is produce a simple table showing that married-couple-with-children households spend more on various things than single-childless households. If you’re thinking, “but there are more people in married-couple-with-children households,” then you may  already have done more thinking than the report’s authors.

To serve the needs of all the adults and children in their homes, they are more likely to buy many brands in bulk, from Bounty to Tide, and to fill their shopping carts at the local grocery store.

I must be doing something wrong, because I thought I spent less in the end when I bought in bulk.

The data abused in this report are from the Consumer Expenditure Survey, which is the authoritative source on household spending in the U.S., and used to calculate inflation. It’s something I’ve used before to study household spending (here and here). And if you use it, all I can say in a sentence is: you better account for household size, since all the spending is reported for households, not individuals.

To illustrate this, I took the data from their little table on (a) married-with-children households, and compared it with the sum of the spending for (b) childless-singles plus the (c) single parent households. If every adult needs one beer a day, and every child needs one glass of milk, then the level of spending in (a) and (b+c) should be the same, if they have the same number of children. This is not good science, but it’s appropriate for a blog-scale debunking. And the results: 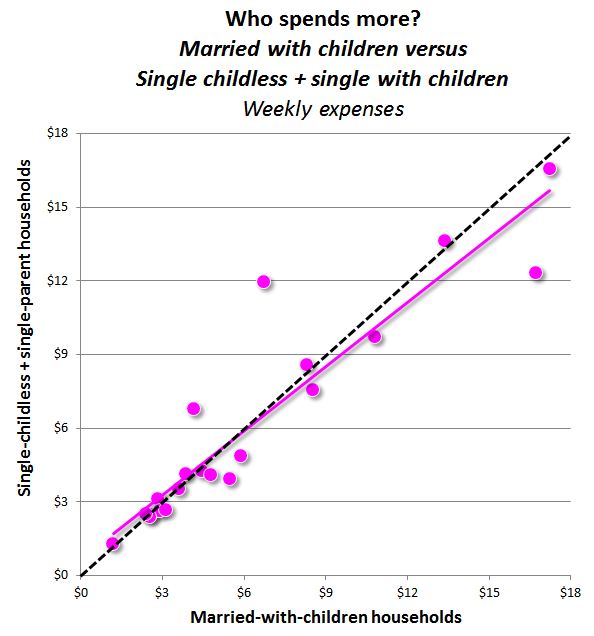 This graph is for weekly expenses on small consumer items;* the graph for bigger ticket items looks about the same. If the dots fell along the dotted line, my beer-and-milk hypothesis would be supported. It’s pretty close — but tipping a little the way you would expect it to — toward bigger households spending less, since they have economies of scale (“buying in bulk”).

Anyway, the numbers are all junk. The more interesting question is: Is this farce or fraud? Maybe they really don’t know what they’re doing, in which case the foundation funding makes it a farce. Or maybe it’s fraud.** Maybe they are deliberately misleading the public, the foundation and the major corporations they are hoping will spend their “philanthropy” money on such “public education” projects, their actual recommendations!

Companies whose fortunes are linked to the health of the family, such as Procter & Gamble, spend billions of dollars each year on advertising. … Executives with oversight across brands should ask themselves a simple question: Do the messages used in our advertising make family life look attractive? Or do they exalt single living? Obviously, it’s in their long-term interest to do more of the former.

If you have another 3 minutes, consider watching this hilarious video they link to as an example of “family life = attractive.” It’s from Proctor & Gamble’s 75th anniversary in the Philippines (unless it’s a spoof, too), which includes images like this:

** colloquial use of the term “fraud” in this blogosphere context is not meant to express or imply legally criminal fraud.