Sometimes a diagram is helpful to organize your thoughts.

A little while ago I commented that crime rates had fallen through the floor even though single parenthood is still on the rise, apparently contradicting a generation of conservative conventional wisdom that attributed rising crime rates to the decline of the nuclear family. In the graphs I showed a very strong positive relationship between crime and single parenthood from 1960 until 1991, after which the relationship was reversed.

In response, someone countered:

Your graphs on single-mother families and crime rates, and your accompanying commentary, conveniently miss any reference to the massive increase in incarceration since the 1980s … Were it not for the fact that this country has incarcerated more than a million men behind bars since the late 1980s, it is likely that the upward swing in single-motherhood & nonmarital childbearing would have been paralleled by an upward swing in crime.

I have written before about the family consequences of the drug war, focusing on how incarceration affects families, rather than on how (whether) family structure drives crime; as well as other aspects of the prison boom (such as giving birth in chains, distorted marriage markets, and how prisons contribute to the spread of HIV).

But I didn’t address the question of how incarceration may have saved us from a worsening crime wave driven by single parenting.

I still don’t have an answer, but I have some thoughts, which I have chosen to express in the form of a conceptual diagram, with references. Each of these links is at least plausible and at most conclusively shown by the research listed below. If I were to dig into this research, this is where I would start: an annotated free-association figure: 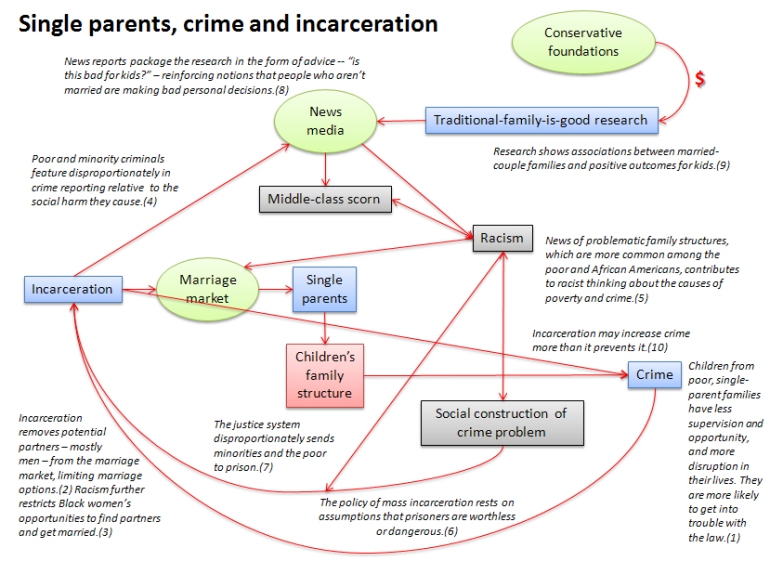 Work process aside: I love a good conceptual diagram. For working things out I can use one like the above. Ideally, though, you would already understand the thing at hand before you present one to others, to make things more clear. I like this classic one from James Coleman, illustrating Weber’s Protestant Ethic:

Unlike my random scattering, this uses the location of the nodes to simply convey the conceptual hierarchy — religion and capitalism as macro, values and behavior as micro, with each path a potentially observable process. The diagram also is intuitive because it shows time moving from left to right. And it’s simple — any less to it and there’s no need for a figure.

On the other hand, I guess a diagram could help keep things straight when they’re complicated, like this one, from “Toward an Integrated Theory of Gender Stratification,” by Randall Collins and colleagues: 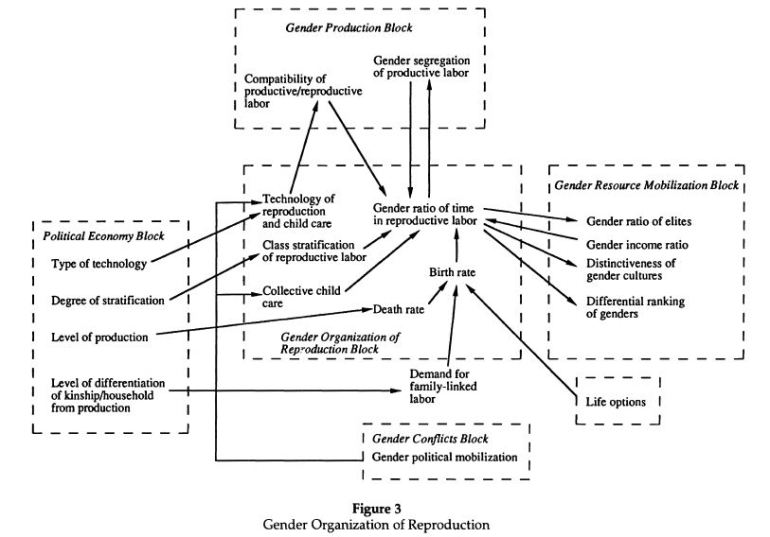 4. Dixon, T. L. and D. Linz. 2000. “Overrepresentation and underrepresentation of African Americans and Latinos as lawbreakers on television news.” Journal of Communication 50(2):131-154.

6. Tonry, Michael. 2010. “The Social, Psychological, and Political Causes of Racial Disparities in the American Criminal Justice System.” Crime and Justice: A Review of Research, Vol 39 39:273-312.

8. I made this argument in a recent blog post here. For a more thorough review of media depictions of single parents, see: Usdansky Margaret L. 2009. “A Weak Embrace: Popular and Scholarly Depictions of Single-Parent Families, 1900-1998.” Journal of Marriage And Family 71(2):209-225.

9. On conservative foundation support for traditional-family-is-good research, see a few of my posts here, here, here, and here.