Seth Stephens-Davidowitz, a PhD student in economics at Harvard, has analyzed Google searches for racially offensive terms across metro areas, and tested for a “racial animus” effect on the vote for Obama in 2008.* The results are pretty strong:

The baseline proxy that I use is the percentage of an area’s total Google searches from 2004-2007 that included the word “nigger” or “niggers.” … A one standard deviation increase in an area’s racially charged search is associated with a 1.5 percentage point decrease in Barack Obama’s vote share, controlling for John Kerry’s vote share. The results imply that, relative to the area with the lowest racial animus, racial animus cost Obama between 3 to 5 percentage points of the national popular vote. … The statistical signiﬁcance and large magnitude are robust to numerous controls including local unemployment rates; home state candidate preference; Census division ﬁxed eﬀects; changes in House voting over the same period; prior trends in Presidential voting; and a variety of demographics controls.

This is a creative way to measure racism — not perfect, but nothing is. And he did a fair amount of experimenting and tinkering with the measures to make sure it wasn’t fluky. Very nice.

Racism at the population level

Another thing that jumped out at me in the paper, however, was the finding among the control variables that racist searches are more common in markets with higher proportions of Black residents. This raises a potentially difficult issue with the whole Google-search method, since we don’t know who is doing the searching. Does his finding suggest that Blacks are doing racist searches? I don’t think so. I previously looked at state-level correlations between race/ethnic composition and search terms, and it looks to me like the most correlated search terms are indeed being performed by those groups. For example, Americans Indians live in states where people Google “Indian Health Service” and Blacks live in states where people Google stuff about historically Black colleges and universities (and Whites apparently Google AC/DC songs).

But at lower levels of correlation, I would expect the presence of one group to affect the search behavior of others. An obvious example is how Southern states mostly vote Republican in national elections — more Blacks equals more conservative voting, even though the great majority of Black voters vote Democratic. The higher rates of conservatism among Whites in those places outweighs the presence of Democratic-voting Blacks. (The effect on Whites was discovered before Blacks could vote in the South, but remains true.)

We also know from way back that inequality between Blacks and Whites is greater where Blacks are more highly represented in the population, and there’s good evidence at least some of this is due to increased racism by Whites. I’ve found this for earnings for both men and women, for middle and working class workers; and, with Matt Huffman, for occupational segregation and access to managerial positions. Only some of that research has actually measured racial attitudes, however. Google gives us a chance to look from a different angle — at the private behavior, not expressed attitudes, of populations.

Here’s one take, jumping off from Stephens-Davidowitz’s paper: searches for “nigger jokes.” This seems like something Blacks are unlikely to be looking for on Google.** But the searches are more common in states with larger Black populations:

Removing West Virginia, which is an extreme outlier on the jokes variable (more than 3 standard deviations from the mean), the correlation between searches for “nigger jokes” and Black population percentage is .48. Here’s the scatter plot (the non-Southern states have the pink centers). 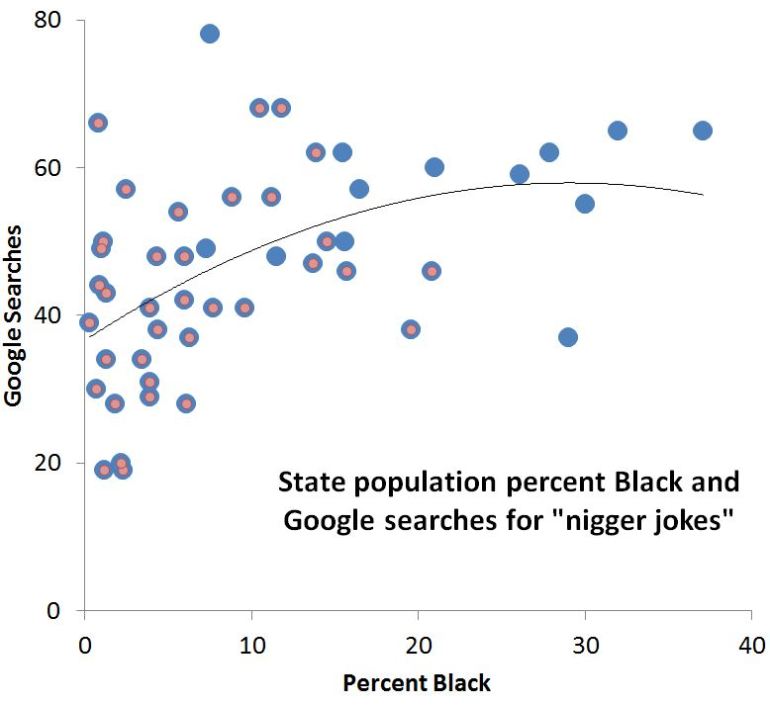 And here’s the regression numbers for the relationship:

That positive relationship, tapering off, fits the long-standing pattern, as seen for example in this 1998 paper, which tested the percent-Black on common attitude measures in the General Social Survey (the figure estimates are net of a variety of controls):

All adding to the accumulating evidence for search behavior as a valuable research tool.

* Thanks to a tip from Rachel Lovell.

** Some searches seem even better for this purpose, such as “funny nigger jokes,” but fortunately there isn’t enough searching for that to get state-level frequencies, according to Google.

9 thoughts on “Googling racism, votes for Obama, and population composition”