After the news that an American soldier apparently committed mass murder in Afghanistan, some reported that he had served multiple combat tours, had suffered a head injury, and had marital problems. Were those factors the cause of his actions?

That line of reasoning did not resonate with some of those closest to the situation, such as this fellow soldier, who was quoted as saying:

I know a lot of people who’ve done multiple deployments, and they always come back so level headed, that I’ve seen.

Last week I had one of those embarrassing moments when I tried to explain something statistical in class using example numbers off the top of my head. It was odds ratios. A bedrock of social science research, odds ratio reporting often causes confusion. In my case, the odds of me screwing up the example are much greater when I don’t first work it out with a spreadsheet.

Now odds ratios are indirectly in the news, and the seminar meets again tonight, so I worked up a quick example using mass murder, and comparing it to something more mundane: cavities (using fake data).

Again, made-up data. Suppose there are 20,000 soldiers on a base, and 18,000 of them are on their first deployment. From previous research, we believe that .01% of soldiers commit mass murder, so we expect (statistically) 2 mass murders on the base. But when a soldier on his fourth deployment commits mass murder, someone hypothesizes that it’s caused by the stress of his multiple deployments.

The odds of committing mass murder for the two groups are 1/1,999 and 1/17,999 respectively, and the ratio of those odds is 9.004. So I would say the “odds of mass murder are 9.004-times greater” among those serving multiple deployments. That’s a big difference. It doesn’t mean deployments cause mass murder, but the hypothesis is still standing.

The difference between the rate ratio (9.091) and the odds ratio (9.004) isn’t big, but with more common events this can add to the confusion. I’ve added a (fictional data) cavity example for comparison. The hypothesis here is that eating sugar causes cavities. 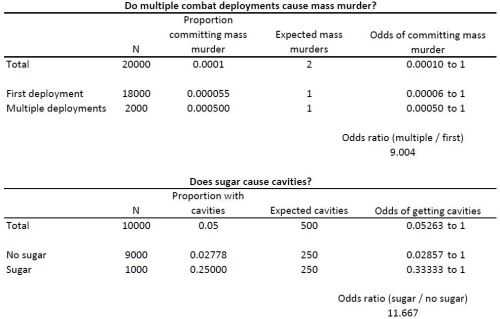 Take-home points from these fake examples:

( I screwed this example up,  so thanks for letting me know so I  could correct it.)