From the Williams Institute at UCLA, a report for the No Family For You file: “Serving Our Youth: Findings from a National Survey of Services Providers Working with Lesbian, Gay, Bisexual and Transgender Youth Who Are Homeless or At Risk of Becoming Homeless.”

The report is cautious in its write-up, which is appropriate, because a survey of service providers only gets you a view through one window into the problem of homeless youth who are LGBT. But in terms of orders of magnitude, I think it’s fair to conclude that LGBT youth make up a very disproportionate share of homeless youth, and that rejection by their families is the leading precursor to their homelessness.

Here is the relevant figure, based on the responses of service providers:

It’s a good reminder that families are only a source of care and support for those who are cared for and supported by their families.

As this report hit the wires last week, ThinkProgress generated one of those graphic Facebook memes, which looked like this: 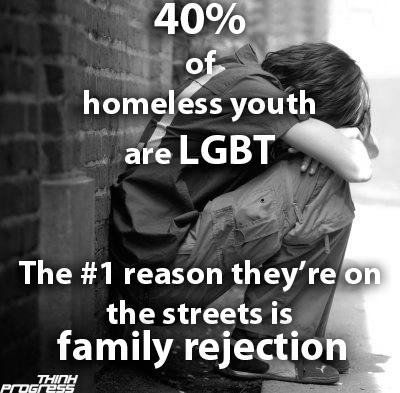 4 thoughts on “LGBT teens made homeless”