In Guns, Germs and Steel: The Fates of Human Societies, Jared Diamond presents a story of world history in which the rise to power of some societies over others was driven by geographic and environmental dynamics.

Some of the stories involve simple chains of evidence like this: societies with more fertile territories settled down earlier and had greater population density, which led to more complex politics, including elites who controlled surpluses and then diverted resources to non-food producers such as artists, craftspeople and bureaucrats, resulting in the development of more advanced language and technology.

We rarely have such large-scale analyses of current social dynamics. One reason contemporary analyses is so much more complicated is because the variations involved are much more subtle and the time frames are much shorter. For example, trying to explain women’s market labor force participation rates that mostly vary between 70% and 85% across rich countries. Or looking at small, marginal effects that tell us something interesting without explaining what really drives the larger outcomes. For example, I found that 34% of mothers with girls named pink or purple as their favorite color, compared with 45% among those with boys — a subtle effect on a minor personality trait. Similarly, we learned recently that boys with sisters are more gender-traditional. But the effect is within a narrow range, and certainly smaller than other more fundamental determinants of gender attitudes.

As I listened to the audio version of Diamond’s book, I tried to imagine how he might describe some recent changes in the U.S., treating differences between states over recent decades as the outcome of such fundamental processes. Here’s one thing I think he might have said:

Those states that assigned greater numbers of people to the task of teaching children more rapidly produced populations with higher levels of education. In half a century, states tripled the number of teachers per student from about 5 per 100 to about 15 per hundred. As a result the percentage of young adults dropping out of high school fell by about half, from near 60% to about 30%. 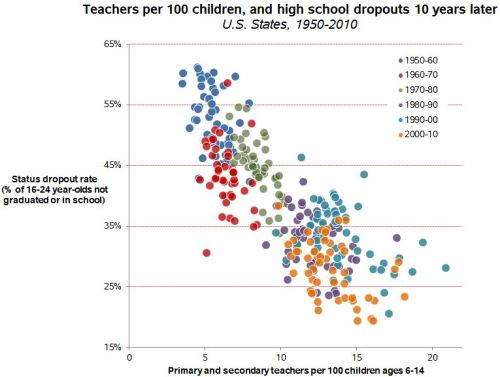 Source: My analysis of Census data from IPUMS.org.

Is that a fair characterization of the history? Or does it overwrite fundamental variation or complexity and lead to the wrong story?

I want more simple stories, and I would also like them to be true.