Women live longer than men in all but a small handful of countries. Is that “natural”?

A future post will deal with this more. But here’s a preview.

It partly depends what you think is a “natural” fertility rate. It’s hard to find societies with really high fertility rates nowadays — hardly any countries have 6 or more children per woman. But where fertility rates are higher, women’s advantage in life expectancy is less (click to enlarge). 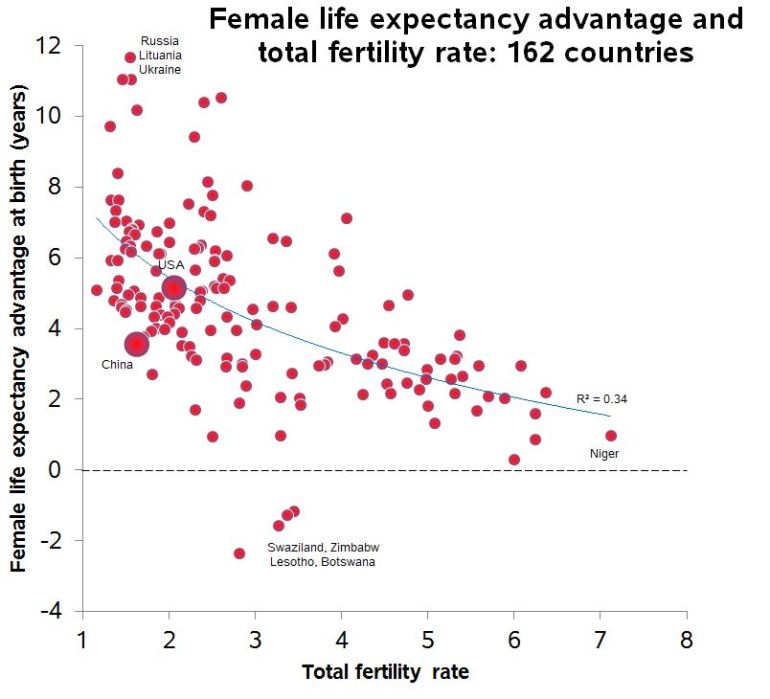 Why? Some women die in childbirth, but that’s not a huge factor in life expectancy anymore, thankfully. In sub Saharan Africa about 400-600 mothers die for every 100,000 births, about half of 1%, which isn’t going to drive overall life expectancy that much. Still, those places are rough places to be a woman, apparently.

Some distinctly unnatural elements are at work — besides war, murder, accidents and suicide — especially smoking, which has enlarged the female life expectancy advantage in the U.S. and Europe dramatically. The World Health Organization has smoking rates by sex for 133 countries or so. The differences are huge. Only Austria has more women than men smoking. The average prevalence gap is 21 percentage points, and in Indonesia the smoking gap is 64% (67% for men versus 3% for women). In a bunch of Arab countries almost half the men smoke, along with almost no women.

The effect of the smoking gap is not apparent in the recent cross-sectional data, however. It takes a few decades after men take up smoking at higher rates (peak female advantage for the U.S. was in the 1970s). But this could be an important factor in the world’s life expectancy gender gap for decades to come.