Which comes first, the Nobel prize or the citations in sociology journals?

Neal Caren produced a list of the 52 works most cited in sociology journals in 2013, which included two Nobel prize winning economists:

I assume those Heckman citations are the result of sadistic journal reviewers or dissertation committee members impressive their colleagues by requiring people to add selection corrections to their regressions.

The Becker citations were applauded by economists. I assumed they were usually cursory mentions in the literature review, representing neoclassical economics in the study of families. And that is basically right. In the 10 most recent citations to Treatise in top-three sociology journals, the book is always mentioned only once. See for yourself. Here are the passages out of context (citations at the end):

I noticed, incidentally, that we may have hit Peak Becker. The Web of Science citation count for his work in journals coded as Sociology peaked in 2011. Maybe the 2012 data just aren’t complete yet. 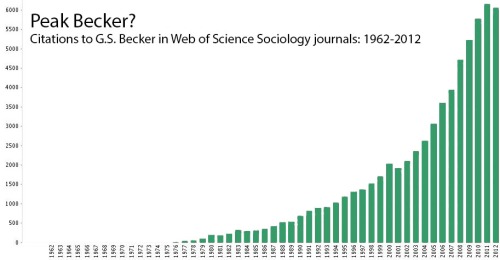 Out of curiosity, I also checked the citations in major economics journals to the most highly-cited sociology article on the household division of labor known for a theoretical argument, Julie Brines’s 1994 article in the American Journal of Sociology. Just kidding; there aren’t any.

No, that’s not true. The article has been cited once in the top 40 economics journals, in Transportation Research Part A: Policy and Practice:

The higher wage earner enjoys a superior bargaining position, and thus can use that power to demand less household responsibility – a proposition that has been the focus of substantial empirical research among sociologists (Heer, 1963, Brines, 1994, Greenstein, 2000, Bittman et al., 2003, Parkman, 2004 and Gupta, 2007).