Referring to The Bell Curve, Paul Krugman wrote that Charles Murray was “famous for arguing that blacks are genetically inferior to whites.” In response, Murray wants us to know that the book was not about race and IQ. The research in the book (co-authored with Richard Herrnstein), purporting to show the powerful effect of genes on intelligence and success in America, was about Whites. Its sole concrete statement about race, Murray says, was this:

It seems highly likely to us that both genes and the environment have something to do with racial differences. What might the mix be? We are resolutely agnostic on that issue; as far as we can determine, the evidence does not justify an estimate.

Why do so many people think the book was a sociobiological racist tract, when it made only indirect claims about genetic racial hierarchies? Context matters. In the U.S., you can practice racism without speaking about race.

In my teaching, I often discuss the role of male incarceration, mortality, and unemployment in contributing to the difference in marriage rates between Black and White women. And when I show that Black men have incarceration rates many times higher than White men’s, I focus on racism more than race. That is, these inequalities are not the outcomes of race, but of the way racial inequality works — explicit and implicit racism, unequal opportunity, policing practices, incarceration policies, and so on. Sometimes I do use phrases like “low-income communities,” or “inner city areas,” but I try to be specific about race and racism when it’s called for — even though of course it can be uncomfortable, for me and my students, to do that. It’s important because in the U.S. system of inequality racial inequality is not just an outcome: the system doesn’t just differentiate people by class or gender or skills or something else, with a lower-class population that “just happens” to be disproportionately from racial-minority groups.

One thing that frustrates me in the growing conversation about economic inequality is the appearance of a perhaps-too-comfortable stance in which being explicit about economic inequality means not having to address racial inequality. It is true, and important, economic inequality exacerbates racial (and gender) inequality. That’s why this stance frustrates me rather than angering me. But there is a certain politeness involved in talking about class instead of race that sometimes doesn’t help. Of course, this issue is not new at all, having been litigated especially extensively in the 1980s around the sociological work of William Julius Wilson (see, e.g., this collection).

Wilson’s research — the declining significance of race, or, the increasing significance of class — contributed to today’s movement against class inequality (as Krugman’s post illustrates). But it has also been co-opted by people taking the really racist position that inequality is caused by race (rather than racism). That is: poor minorities cause poverty. This position ironically doesn’t have to discuss race at all, because the framing is the dog whistle.

Which brings us around to the flap over Paul Ryan’s recent racist-without-race remarks. Here is a series of quotes to put that in context. None mentions race. Follow the underlined sequence:

William Julius Wilson: “Inner-city social isolation also generates behavior not conducive to good work histories. The patterns of behavior that are associated with a life of casual work (tardiness and absenteeism) are quite different from those that accompany a life of regular or steady work (e.g., the habit of waking up early in the morning to a ringing alarm clock).”

Paul Ryan: “We have got this tailspin of culture, in our inner cities in particular, of men not working and just generations of men not even thinking about working or learning the value and the culture of work.”

Charles Murray: “Try to imagine a GOP presidential candidate saying in front of the cameras, ‘One reason that we still have poverty in the United States is that a lot of poor people are born lazy.’ You cannot imagine it because that kind of thing cannot be said. And yet this unimaginable statement merely implies that when we know the complete genetic story, it will turn out that the population below the poverty line in the United States has a configuration of the relevant genetic makeup that is significantly different from the configuration of the population above the poverty line. This is not unimaginable. It is almost certainly true.”

In this progression, we go from children not being sufficiently exposed to steady work, to children seeing no one working in their daily lives, to multiple generations not even thinking about working, to people who are genetically lazy. That’s something!

What they talk about when they’re not talking about race

In his post on the Paul Ryan comment, Shawn Fremstad compares Ryan to Murray and concludes that Murray is more apocalyptic because he’s warning against a White cultural collapse, not just complaining about a Black one. Murray has perfected the strategy of writing about Whites (including in his latest book, Coming Apart). But I usually think of this as a dog whistle device to protect his mainstream image while whipping up his racist base. That is, if you show that genetic intelligence determines economic inequality among Whites (Bell Curve) or that declining moral standards undermine families and the work ethic among Whites (Coming Apart), then the implications for Blacks — poorer and therefore supposedly more morally decrepit and less intelligent on a population level — are obvious and need not be repeated in polite company. Just say, calmly, “Smoke,” and let (racist) nature takes its course.

But maybe Fremstad is right, that the Full Murray is more extreme than the dog-whistling Ryan. Here’s how he puts it:

In short, today’s Charles Murray thinks the much bigger culture problem—the one that really puts American society’s very survival at risk—is with white working-class people, which is what makes Ryan’s almost-nostalgic dog-whistling about “inner-city” men so striking. The big question here is whether Ryan is willing to up ante, and go for the full Murray by calling out white working-class “culture”, particularly in the suburbs and small towns where so many low- and moderate-income white people live.

I don’t know. But one answer to that came in the follow-up flap, in which Ryan insisted to a reporter that he was talking about all poor people, such as the rural poor, for whom “there are no jobs.” As Jay Livingston points out, that’s not a clarification that was warranted when he was talking about “inner city” men who are “not even thinking about working.”

What does Brad Wilcox have to not say about this?

The other recent entry in this tradition is none other than Brad Wilcox, currently a colleague of Murray’s (and apparently an impressive one) at the American Enterprise Institute (AEI). In last year’s attempt to promote early marriage, the “Knot Yet” report, he wrote about the “education and class divide” in non-marital births — and avoided race almost entirely.

But seriously, if you claim to be serious about the serious issue of unmarried women having babies, you can’t politely ignore race and racism. It’s ridiculous (as I’ve argued before, about mobility). This issue simply does not reduce to social class or education level. Look: Black mothers are much more likely than White mothers to be unmarried at every education level. 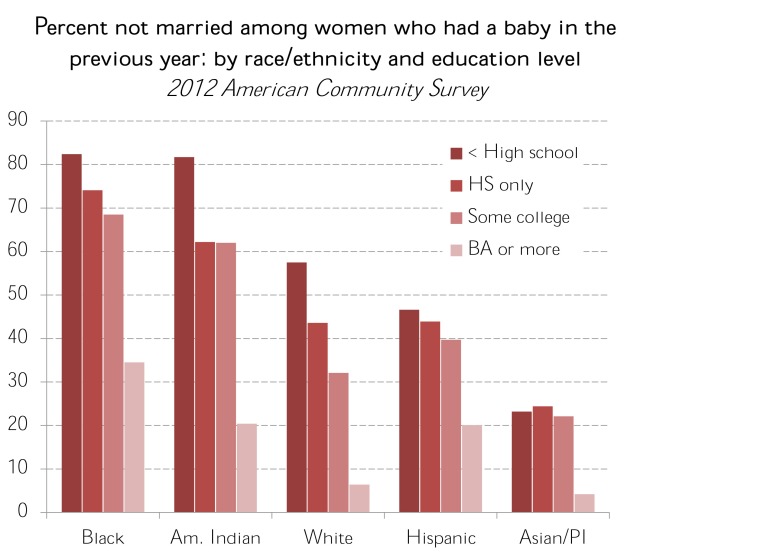 Among college graduates, Black mothers are 5.4-times more likely than White mothers to be unmarried; for high school graduates it’s 1.7-to-1. Asian mothers who are high school dropouts are less likely to be unmarried than Black college graduates. However you want to address this issue (if you want to address it at all), if you ignore this pattern and only talk about education or social class, you’re either uninformed or dishonest.

Or, you don’t care about Black families. This is exactly what Wilcox exhibited in a shocking interview with James Pethokoukis for AEI. Wilcox said the government should lead a public education campaign to convince people to be married before they have children. Then the question was, “What would be the nature of that sort of PR campaign, and to whom would it be directed?” This was his answer (from the edited transcript):

Well, the first thing is you have to understand is where all the momentum is here. Basically, since the 1970s, you’ve seen pretty high levels of single parenthood and non-marital child bearing among poor Americans and Americans who are high school dropouts. And we’ve also seen in the last really 20 or 30 years that in some important respects, marriage is stronger among college-educated Americans. So, for instance, divorce has come down from the ’70s to the present for college-educated Americans. So there’s been progress there.

But I think in terms of where all the sort of movement is recently, and it’s primarily in a negative direction, it’s among moderately educated Americans who have got a high school degree or some college or kind of classic working-class or lower middle-class Americans. And it’s this particular portion of the population and where about half of their births are outside of marriage today. And they’re at a tipping point. They can go down the road of not having marriage as the keystone to their family formation, family life, or we can hold the line, if you will, and try to figure out creative strategies for strengthening marriage in this particular middle demographic in the United States.

What is the “classic working class or lower middle-class American”? Hm. Here I’ll switch to my own transcription of the audio file AEI posted, because the details they edited out are interesting. Pethokoukis asks Wilcox to elaborate, “is this the bottom 20 percent we’re talking about”?

No, no. I’m talking about, essentially, from the 25th percentile, if you will, to the 65th percentile. So, one way to talk about it would be, sort of, you know, in some ways the NASCAR demographic would be one way to talk about it. Actually a large share of the Hispanic population in the United States would fit into this demographic group. You know, it’s sort of this middle American group, both white and Hispanic, where, once again, they’re at kind of a tipping point. And if we can kind of I think get a positive message to this group or these groups about marriage and fatherhood, you know it’s kind of an ideal, it’s a goal. That is part of the solution.

Really. The 25th to the 65th percentile of family income? That is from $32,500 to $85,000 income per year. That includes 33 percent of the African American population, 37 percent of Whites, and 38 percent of Latinos.* So, it’s more or less the middle third of each group. Or, you know, sort of, Whites and Hispanics. And NASCAR people.**

Now I suppose this is what Shawn Fremstad calls the Full Murray. Wilcox is raising the alarm about Whites, “classic” Americans, who are “at kind of a tipping point.” Just as Ryan invokes the lack of jobs when he gets out of the “inner city,” when Wilcox is talking about “classic” Americans, he says there is still time to stop them from going “down the road of not having marriage as the keystone to their … family life.” With them, “we can hold the line” for marriage. The clear implication is that Blacks passed that “tipping point” already, so that no such intervention is warranted.

*All these numbers are based on the Current Population Survey of the civilian non-institutional population.

** Wilcox presumably assumes NASCAR fans are White, but various sources (like this and this) say Blacks are about 9% of its fan base (can you find the Black fan in the picture above?).