There is new research from the National Center for Education Statistics (NCES), written up by Susan Dynarsky at the New York Times Upshot. The striking finding is that poor children in the top quartile on high school math scores have a 41% chance of finishing a BA degree by their late twenties — the same chance as children from the second-lowest quartile in math scores who are high-socioeconomic status (SES). Poor children from the third-highest quartile in high school math have graduation about equal to the worst-scoring children form the richest group. Here’s the figure:

The headline on the figure is misleading, actually, since SES is not measured by wealth, but by a combination of parental education, occupation, and income. (Low here means the bottom quartile of SES, Middle is the 25th to 75th percentile, and High is 75th and up.)

One possible mechanism for the disparity in college completion rates is education expectations. Dynarsky mentions expectations measured in the sophomore year of high school, which was 2002 for this cohort. What she doesn’t mention is how much those expectations changed by senior year. Going to the NCES source for that data (here) I found this chart, which I annotated in red: 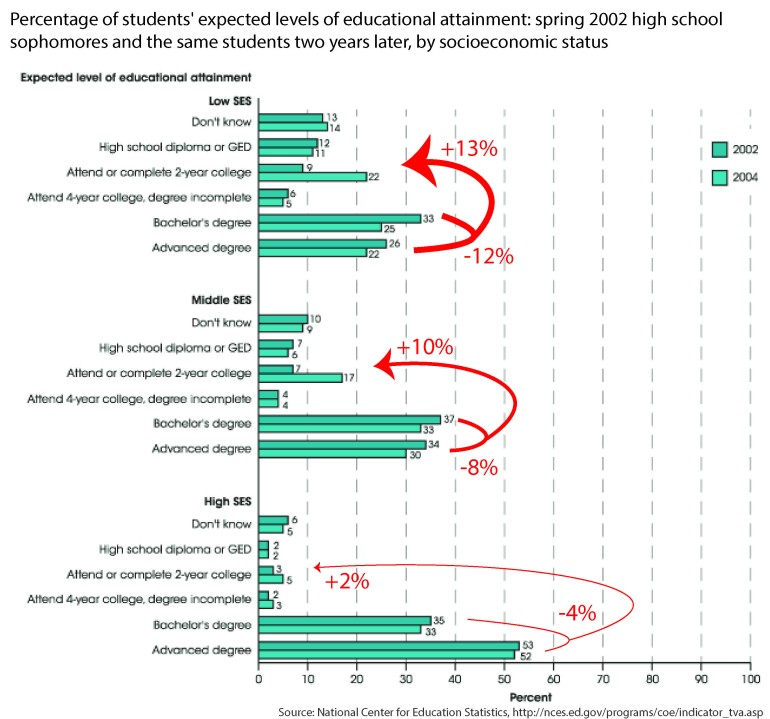 Between sophomore and senior year, the percentage expecting to finish a BA degree or more decreased and the percentage expecting to go to two-year college increased, across SES levels. But the change was much greater for lower SES students. So the gap in expecting to go to two-year college between high- and low-SES students grew from 6 to 17 percentage points; that is, from 9% versus 3% in the sophomore year to 22% versus 6% in the senior year. That’s a big crushing of expectations that happened in the formative years at the end of high school.