The following are notes for my remarks at an author-meets-critics session at the Social Science History Association yesterday in Baltimore. The book is One Marriage Under God: The Campaign to Promote Marriage in America, by Melanie Heath. 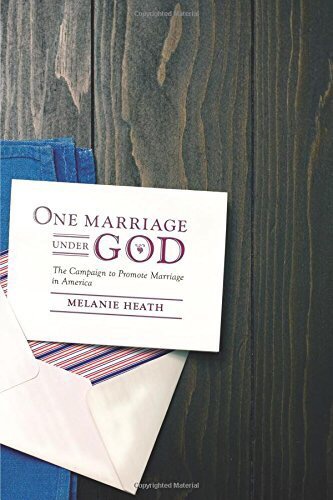 The book is well researched, elegantly argued, easily read, and deeply thought-provoking. I highly recommend it.In the study, Heath analyzes many aspects of the marriage promotion movement, including marriage classes and training and organizing, using participant observation, and interviews and focus groups, in Oklahoma.

I have forgotten that it was from this book that I learned that the welfare reform law of 1996 begins with the sentence, “Marriage is the foundation of a successful society.” This explains so much about why marriage promotion and welfare reform are one project, how futile they both are, and how reactionary, in my opinion. Heath makes this very clear when she describes the use of welfare money to teach marriage education to white, middle-class couples, ultimately probably widening the “marriage gap between lower and middle-class families.”

I usually criticize marriage promotion for spending poor peoples money on convincing them to get married, but it’s actually often spent helping middle-class people with their marriages altogether. But that makes perfect sense: welfare, just like welfare reform, is made to build up the normative white middle-class family. Thus, when, as Heath observes, poor single mothers resented their useless workshops on the importance of marriage, the program was actually serving its purpose.

Instead of a safety net, in the United States we have marriage – but we have less and less of it. That means it is a privilege and a necessity, and excluding people from it is a form of inequality.

And driving people toward marriage is what we substitute for welfare – how we give people a choice between conformity and destitution for them and their children – and justify that forced choice with Christian morality.

The passages describing the presence of same-sex couples in marriage education classes are excruciating and extremely revealing. And yet she discovers that even the conservatives in these situations recognize the lesbian couples “have needs too” — a reality that necessitated additional boundary work to protect the core concept at hand. The lesbians literally had to play the roles of heterosexuals in class exercises.

Marriage promotion uses marriage to bolster the gender difference and its hierarchy simultaneously. And it elevates marriage through the contrast with welfare dependency which it sees as “an assault on freedom and responsible citizenship.” Both positions reinforce the gender hierarchy. And this helps to answer why the marriage promotion movement has never embraced same-sex marriage rights (despite a halfhearted and ultimately unsuccessful rearguard effort by David Blankenhorn and a few other washed up marriage promoters).

She presciently includes the campaign to ban same-sex marriage in the research. This is entirely fitting because these two movements have been united from the start — but that connection blossomed in the years since she wrote this book (published in 2012). We see this in the political history and the interlocking organizational leadership networks between marriage promotion and the movement against marriage equality: David Blankenhorn, Maggie Gallagher, Brad Wilcox, Mark Regnerus, the National Marriage Project, the National Organization for Marriage, the Institute for American Values, the Heritage Foundation, The National Fatherhood Initiative, the Family Research Council. (This movement, incidentally, and especially its research and public relations arms, formed the context in which the Council on Contemporary Families, of which I am now a board member, was organized.) Add William Galston, also Ron Haskins, Marco Rubio, now and the GOP debate over the larger child tax credit (and debate over its refundability).

Heath puts it well when she writes of their “shared ideology that relies on an ideal heterosexual family as a way to manage and organize the diverse and often contradictory threads of market fundamentalism, religion, and morality.”
An important original contribution of this book is Heath’s description of the nationalist and patriotic underpinnings of the marriage promotion movement, which I had not fully appreciated (something also seen in the marriage promotion efforts among American Indians in Oklahoma and the so-called Native American Healthy Marriage Initiative.) Fighting same-sex marriage, and fighting the culture of poverty, are both efforts to shore up the family bulwark of American citizenship.

Marriage promotion, as embodied in the trainings and educational materials that she studies, was built on the program to enhance inherent differences between men and women, which are of course also the pillars upon which opposition to marriage equality stands. And a basis for Christian morality and traditional nostalgic American patriotism — as well as capitalism, or more properly market fundamentalism, because this marriage structure stands in opposition to dependence on the welfare state and in support of the family wage and the patriarchal family economy.

She writes: “this punitive individualism, and the lack of an alternative narrative in the American ethos, enables coalitions of various stripes (conservative Christians, economic conservatives, and centrist liberals) to join together in promoting marriage. In this way marriage ideology connects Americas market fundamentalist corporate culture with moral/religious traditions.”

Marriage promotion — true to the long history of the American welfare system — becomes an inequality reproduction machine, serving race, gender and sexuality divides, and building the ideological supports for widening economic inequality. In the end they don’t increase the amount of marriage, or decrease the amount of poverty, and that does not mean they have failed.

One Marriage Under God belongs in the pantheon of classic historical work on marriage in the United States, including works by Nancy Cott and Stephanie Coontz, as well as Gwendolyn Mink, Linda Gordon, and Ruth Sidel — just off the top of my head. Now that marriage promotion has been demonstrated to be a failure on its own formal terms by the extensive and well-funded and well-conducted studies paid for by the welfare program, and now that the Supreme Court has effectively ended the movement against marriage equality, the book is thankfully more historical then it was just three years ago. But, as a reading of those historical works I just mentioned clearly shows, this thing just will not die. So this book remains essential.

3 thoughts on “Book review: One Marriage Under God”