Old people work more than they used to. This is important if you’re worried about what an aging population means for the economy.

When they taught me demography, I learned about the dependency ratio, which was the number of people presumed to be dependents (those ages 0-14 and 65+) relative to those presumed to be working (those ages 15-64). It’s a traditional measure, and a little archaic now that people spend much more time in school. But it’s nice because it sort of assumes that those “working age” adults are being productive whether they have jobs or not – it’s not just counting employed people – so it has an unstated recognition of (mostly women’s) unpaid labor.

This means the catastrophic view of productivity effects of again needs to be tempered by a better understanding of how much old people work. Here’s what I mean.

First, what the World Bank calls “Dependency Ratio, old,” which is the number of people age 65 and older as a percentage of the population ages 15-64. This is supposed to reflect the burden of age on the the young(er).* Here is it for the USA and the world (click to enlarge):

That’s the Baby Boom generation hitting older ages there at the end of the USA trend. As a result, the dependency ratio (old) has increased 30% in the USA since 1980, and the world is following.

But old people work more (or, we don’t label people “old” as early, you might say). Here’s the average annual hours of paid work for people in the USA ages 65 and older. Note this includes all those working no hours in the average, which is what you need to do if you’re interested in the total economic benefit/burden ratio (click to enlarge). 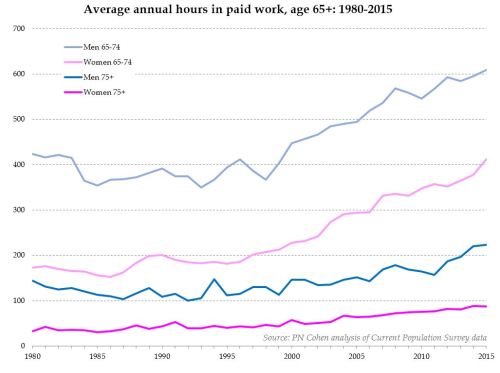 Now, if you add up those hours, you can calculate how much of a burden old people are relieving from the young by their employment hours. In this figure I calculate the total hours worked for each age-gender group and divide it by the total number of people ages 65 and older. Looking at the bottom blue area, for example, this shows that in 2015, the total population of men ages 65-74 did 166 hours of paid work for each person age 65 and older. Regardless of the size of the old population, then, there is that much less supporting of them to do (click to enlarge).

The per-person contribution of paid work hours from people 65 and older has increased 72% since 1980, from 206 to 354 hours per year. Most of the increase is from women’s employment, and it’s just starting. The oldest Baby Boom women, the women who led the increase in women’s employment over their careers, are still only 69 in 2015. Further, this measurement of paid hours may be an indicator of the unpaid productivity of these groups as well, as their health and activity levels improve.

It may be useful to track the population age composition over time (as in the World Bank data above), but it’s not reasonable to assume a constant level of dependency associated with people of different ages.

*Note: Of course, I use terms like “burden” in the classical demographic sense and tongue-in-cheek. I actually want more old people to live longer and work less, because that burden is what life is all about. But there is the issue of making sure everyone has their needs met.

6 thoughts on “Get your dependency ratio off my lawn”