In 2012 I did a post about teen birth rates, abstinence, and Google searches for Antichrist stuff. The most important point was that abstinence education doesn’t work. In this post I use the percentage of teen (women) having a birth, and see what people are Googling in places with more teen births.

This is an inductive approach that generates ideas and surprises. Out of the billions of things people search for, which searches are most correlated with a demographic or social pattern across states? For example, the relationship between low marriage rates and searches about Kanye West is very strong (even controlling for a bunch of demographics), and state suicide rates are highly correlated with lots of searches about guns. If you think these are random flukes, you may be right — but then look at what searches correlate with racial/ethnic composition of states.

So for teen births, this is easy to get from the American Community Survey via IPUMS (I used the 2010-2014 combined file), which asks of each person if they had a baby in the previous year. Teen birth rate is the percentage of women ages 15-19 who did. Then you surf over to the Google Correlate tool and upload the teen birth rates file. The result is the 100 searches that are most highly correlated with the state file you uploaded. Someone with the keys to Google could get more, but this is what any member of the public can do.

We know that teen births are most common in the Southwest and South, and that broad pattern is really what’s most important: Republican-dominated states, the Bible belt, and places with a lot of poor young people.* Here’s the broad strokes:

The Google searches is just for thinking about subtler cultural relationships and generating ideas.

Among the top 100 searches most correlated with teen births, American muscle cars stand out: Mustangs (13), Camaros (5), Hummers, Chargers, along with related things like transmissions. Next, however, is Bible stuff. There are 12 searches that correlate with the teen birth rate at .80 or higher on the list:

Here’s a map showing the ACS teen births rates on the left and searches for “original bible” on the right, correlation .83:

(A little disturbingly, “what is cinnamon” is also high on the list [correlation .81] — cinnamon is often promoted as a “natural” medicine to cause miscarriage.)

I exported the correlation file from Google and then averaged those 12 searches, producing a bible searches index that correlates with teen births at .87 (all the search correlations come out as z-scores, so the average has mean of 0 and s.d. of .93). Here are the results:** 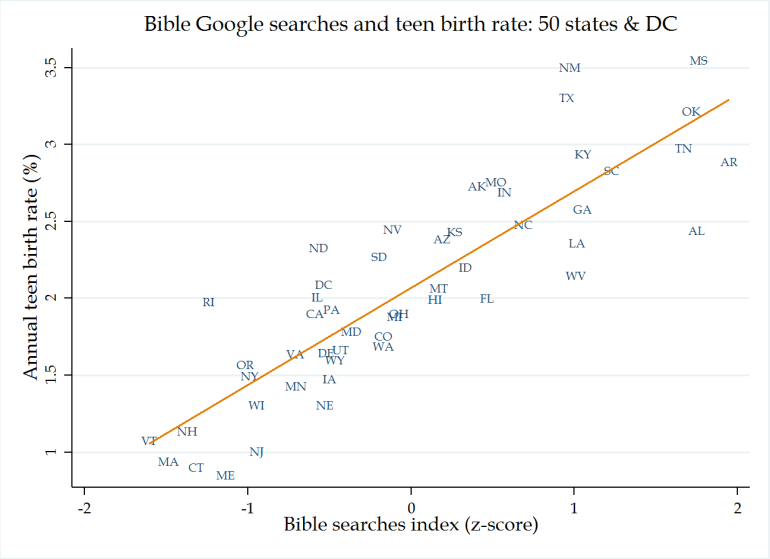 I’m no Bible expert, and this could all be a total coincidence, but I think some real research on it might be pretty interesting. Maybe the people who say the Bible is awesome for families and teen births are bad should look into it.***

Followup: Of course, if you only look at the highest correlations out of billions, you find high correlations. So I don’t expect a research award for discovering that. And that fact that these bible searches are from certain niches of Christianity is an interesting tidbit but just as food for thought. The more theory-driven version of this research might start with searches for just the word “bible”and test the hypothesis that it’s correlated with teen births.  That relationship is not as strong (correlation .74), but it’s still plenty to go on: 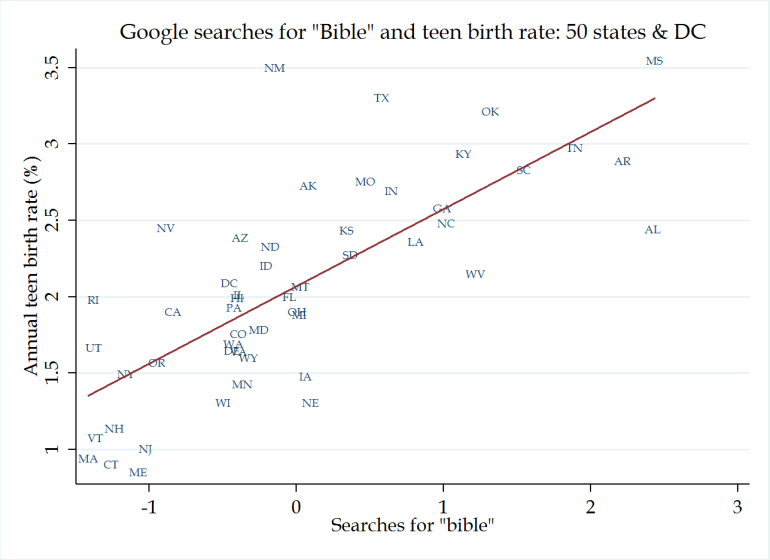 I take from this weaker finding that the stronger pattern above is not just a fluke or an artifact of the method.

* This survey measure is correlated .89 with the 2008 list of state teen birth rates published by the National Center for Health Statistics. I would have a better sense of which is the right one to use if Google Correlate would say what time period is used for their analysis, but I can’t find that anywhere. When I used the NCHS list instead of my ACS list, it was more dominated by muscle cars and had less Bible stuff, as only “book of enoch” was in the top 100, correlated .87 with teen births.