When you make up “generation” labels for arbitrary groups based on year of birth, and start attributing personality traits, behaviors, and experiences to them as if they are an actual group, you add more noise than light to our understanding of social trends.

According to generation-guru Pew Research, “millennials” are born during the years 1981-1997. A Pew essay explaining the generations carefully explains that the divisions are arbitrary, and then proceeds to analyze data according to these divisions as if are already real. (In fact, in the one place the essay talks about differences within generations, with regard to political attitudes, it’s clear that there is no political consistency within them, as they have to differentiate between “early” and “late” members of each “generation.”)

Amazingly, despite countless media reports on these “generations,” especially millennials, in a 2015 Pew survey only 40% of people who are supposed to be millennials could pick the name out of a lineup — that is, asked, “These are some commonly used names for generations. Which of these, if any, do you consider yourself to be?”, and then given the generation names (silent, baby boom, X, millennial), 40% of people born after 1980 picked “millennial.”

“What do they know?” You’re saying. “Millennials.”

The generational labels we’re currently saddled with create false divisions between groups that aren’t really groups, and then obscure important variation within the groups that are arbitrarily lumped together. Here is just one example: the employment experience of young men around the 2009 recession.

Each group took a big hit, but their recoveries look pretty different, with the earlier cohort not recovered as of 2015, while the youngest 1991 group bounced up to surpass the employment rates of the 1987s by age 24. Timing matters. I reckon the year they hit that great recession matters more in their lives than the arbitrary lumping of them all together compared with some other older “generations.”

Next, marriage rates. Here I use the Current Population Survey and analyze the percentage of young adults married by year of birth for people ages 18-29. This is from a regression that controls for year of age and sex, so it can be interpreted as marriage rates for young adults (click to enlarge). 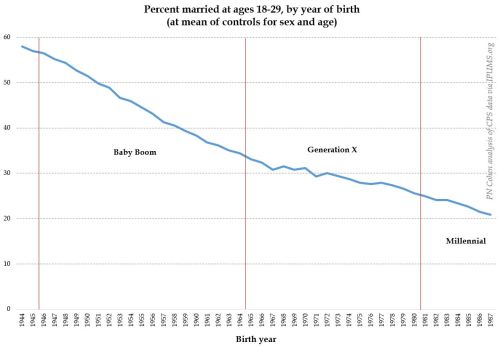 From the beginning of the Baby Boom generation to those born through 1987 (who turned 29 in 2016, the last year of CPS data), the marriage rate fell from 57% to 21%, or 36 percentage points. Most of that change, 22 points, occurred within the Baby Boom. The marriage experience of the “early” and “late” Baby Boomers is not comparable at all. The subsequent “generations” are also marked by continuously falling marriage rates, with no clear demarcation between the groups. (There is probably some fancy math someone could do to confirm that, with regard to marriage experience, group membership by these arbitrary criteria doesn’t tell you more than any other arbitrary grouping would.)

Anyway, there are lots of fascinating and important ways that birth cohort — or other cohort identifiers — matter in people’s lives. And we could learn more about them if we looked at the data before imposing the categories.

5 thoughts on “Two examples of why “Millennials” is wrong”