While cautious about the risks the normalizing Trump, I have nevertheless attempt to engage a little with his followers on Twitter, which is the only place I usually meet people who are willing to support him openly. One exchange yesterday struck me as iconic so I thought I’d share it.

Maybe if I’d studied conversation or text analysis more I would be less amazed at how individuals acting alone manage to travel the same discursive paths with such regularity. In this case a Trump supporter appears to spontaneously recover this very common path over a short handful of tweets:

The replies got jumbled up so I use screenshots as well as links (you can start here if you want to try to follow it on Twitter).

Ivanka Trump tweeted something about how she was going to India. Since I’m blocked by Donald but not Ivanka, if it’s convenient I sometimes do my part by making a quick response to her tweets. I said, “Your representation of the US in India epitomizes the corruption and incompetence of this administration.”

The responses by @armandolbstd and @dreadGodshand are very typical, demanding “proof” about things that are obvious to basically informed people. I made the typical mistake of thinking we could talk about common facts, using the word “literally” a lot:

OK, so then I got sucked in with what I thought was the most obvious example of corruption, leading @dreadGodshand into the whole cycle:

Interesting how the “ok, maybe it’s true but so what” thing we hear constantly strikes him as suddenly a new question. And from there on through no-big-deal to Obama-was-worse to nothing-matters: 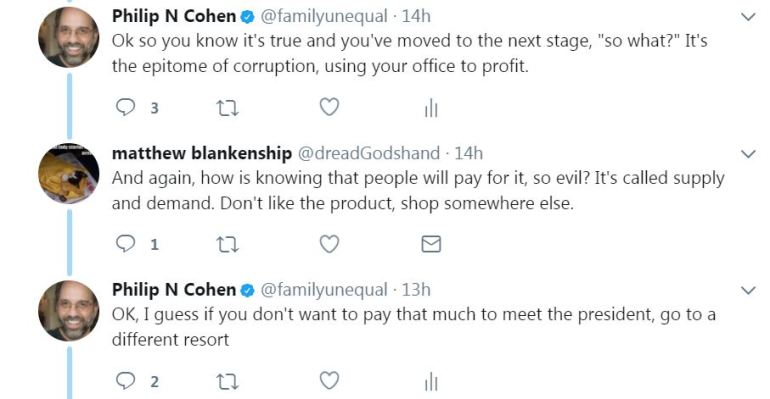 And he concluded, “I’m not hating obama for it. It’s not that big of a deal. It’s designed that way to help their parties. Who really cares?”

This reminds me of the remarkable shift in attitudes toward immoral conduct among White evangelicals, who used to think it was a very big deal if elected officials (Obama) did immoral things in private but now (Trump) shrug:

People do change. But I don’t put that much stock in changing people, and contrary to popular belief I don’t think that’s how you have to win elections. In the end defeating Trumpism politically means outvoting people who think like this, which will be the result of a combination of things: increasing turnout (one way or the other) among people who oppose him, decreasing turnout among people who support him, and changing the number of people in those two categories.

You might think this example just shows the futility of conversations like this, but maybe I’m missing some opportunity to get through. And it’s also possible that this kind of thing is demoralizing to Trump supporters, which could be good, too. So, live and learn.

One thought on “Hitting for the cycle in Trump land”