I’ve been working on my review of Mark Regnerus’s new book, Cheap Sex, in 10-minute power bursts. Here’s one funny thing I noticed: Hanna Rosin’s most prominent error from The End of Men apparently repeated telephone-style by Regnerus.*

In the Atlantic article, which led to her TED Talk and then book (full review), The End of Men, Hanna Rosin’s editor chose two dramatic statements that were wrong to lead with:

That year, 2010, women were not the majority of the workforce, and most managers were not women. And they still aren’t. What was true was that for 10 months women outnumbered men in what the Bureau of Labor Statistics reports as the “nonfarm payroll,” from June 2009 to March 2010. In every month before and since, men have been the majority. Here’s that trend, by month: 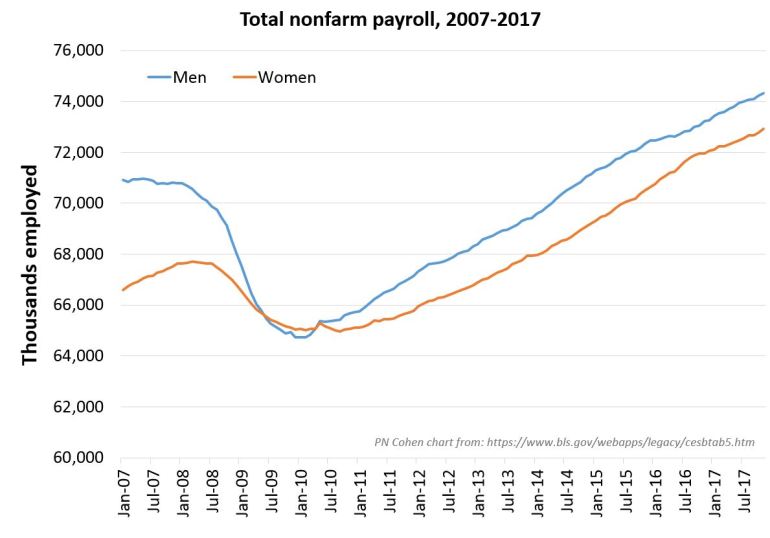 The nonfarm payroll number is:

a measure of the number of U.S. workers in the economy that excludes proprietors, private household employees, unpaid volunteers, farm employees, and the unincorporated self-employed. This measure accounts for approximately 80 percent of the workers who contribute to Gross Domestic Product.

It’s not “the workforce,” but it is a good indicator of shocks to the economy — private companies may lay people off immediately, while self-employed people still consider themselves employed even if they’re suddenly losing money.  Anyway, in the BLS’s household survey that asks people if they are working, the Current Population Survey, there were about 10 million more people counted as employed, and men’s majority have never been threatened. This is a reasonably called “the workforce.” Note the time trend here is longer, and it’s annual:

The source of the wrong statement about managers is just Rosin combining managerial and professional specialty jobs into “managers,” which she also did in the TED Talk, which is just wrong. Professionals include a lot of women, like nurses and teachers. The managerial occupations have never been majority-female either. Both are important, but only one fit her narrative.

Anyway, the point of this is that Mark Regnerus picked up this meme — which Rosin popularized but lots of other media repeated — and stated it as current fact in his 2017 book. So powerful (among those not powerfully applying themselves) is the idea of automatic gender progress in one direction, that this is not the kind of thing they think they will ever have to check again. Once women pass a milestone, it’s passed, period. (That’s why Rosin’s full sentence was this: “Earlier this year, for the first time in American history, the balance of the workforce tipped toward women, who now hold a majority of the nation’s jobs.” She was misapplying the clickbait concept of “tipping point” to imply that the change will now continue and accelerate in the same direction.)

This is why Regnerus apparently felt no need to recheck his facts when he wrote, “there are now more women than men in the paid labor force.” He didn’t cite Rosin (or anyone) for this fact, but it appears during a passage sandwiched between parts that cite her book, so I assume that’s what he was borrowing from, and maybe just changed “workforce” to “paid labor force” to sound different or sophisticated.

Anyway, Rosin doesn’t feature prominently in the Regnerus review (you’re welcome), but this was an interesting nugget, because for all their differences, there are some similarities between Regnerus’s fanatical religious anti-feminism and Rosin’s sophisticated postfeminist antifeminism. Both think feminism has gone too far, and both see the rise of women as resulting from a technological change — Rosin from deindustrialization and Regnerus from the Pill. Also, they both use facts not to learn from but to demonstrate things they think they already know.

* To read the whole Regnerus story, follow his tag on the blog, or check out the whole story told in one chapter of my new book, Enduring Bonds: Inequality, Marriage, Parenting, and Everything Else That Makes Families Great and Terrible.