In The Cut, Adam Sternbergh has a piece called, “The Extinction of the Middle Child They’re becoming an American rarity, just when America could use them the most.”

According to a study by the Pew Research Center in 1976, “the average mother at the end of her childbearing years had given birth to more than three children.” Read that again: In the ’70s, four kids (or more) was the most common family unit. Back then, 40 percent of mothers between 40 and 44 had four or more children. Twenty-five percent had three kids; 24 percent had two; and 11 percent had one. Today, those numbers have essentially reversed. Nearly two-thirds of women with children now have two or one — i.e., an oldest, a youngest, but no middle.

It is true there are a lot fewer U.S. families with more than two children today than there were in 1976. However, by my reckoning (see below), in the most recent data (2016), 38 percent of mothers age 40-44 who have had any children have had three or more. So, there’s a middle child in more than a third of families. And, crucially, that number hasn’t dropped in the last 25 years. I’ll explain.

The best regular national survey for this is the Current Population Survey’s June Fertility Supplement, which is administered to a national sample by the Census Bureau more or less every two years. They ask women, “Altogether how many children have you ever given birth to?” The traditional way to measure total number of children born for a cohort of women is to take the average of that number for women who are ages 40-44. (I would rather do it at ages 45-49, but they didn’t always ask it for women over 44.)

This is what you get for the surveys from 1976 to 2016 (remember these are the years the women reached the end of their childbearing years). 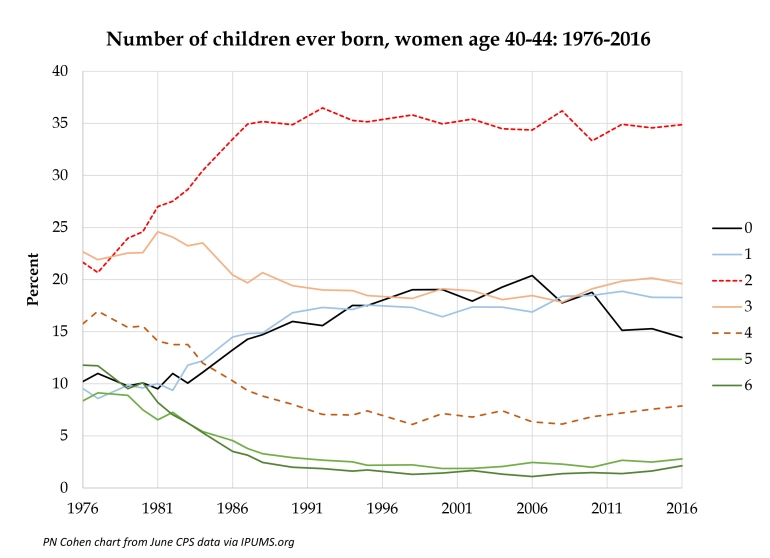 You can see how it’s a little tricky. First, the biggest changes were over by the 1990s, when the last of the Baby Boom parents reached their forties (their first kids were born 25 years earlier). The biggest changes after that were in the number of women having no children, which rose until 2006 but then fell, possibly as access to fertility treatments improved. (Note in all this we’re calling all the children one woman has a “family,” but really it’s a sibling set; some will be living with other people and some will have died, so it’s not a measure of family life in the household sense of family. And it’s all based on children women have, so if there are different fathers in these families we wouldn’t know it, and if these children have half-siblings with a different mother we wouldn’t know it, but that’s the way it goes.)

It’s hard to see what this means for the prevalence of middle children in the country, because the no-children women aren’t relevant. So if your question is, “what proportion of families with children have any middle children?” you would want to do it like this, which excludes the childfree women, and combines all those with three or more:

This shows the big drop in middle-child families that Sternbergh started with, but it puts it in perspective: the change was over by the 1990s, and since then it’s been basically flat at 35+ percent. So, things have changed a lot from the days of the Baby Boom, but the same article could have been written, demographically speaking, in 1992. (Note that the drop in total fertility rate since 2008 [see this] hasn’t yet shown up in completed fertility since it’s among younger women.)

It’s not clear whether the unit of analysis should be the family or the child, however. This says 38 percent of women produce middle-child families. But how many children have the experience of being a middle child (defined as a child with at least one older and one younger sibling)? That might make more sense if you’re interested, as Sternbergh is, in the effect of middle children on the culture. So just multiplying out the number of children per woman, and counting the number of middle children as the total minus two for all sibships of three or more (I think I did it right), you get this: 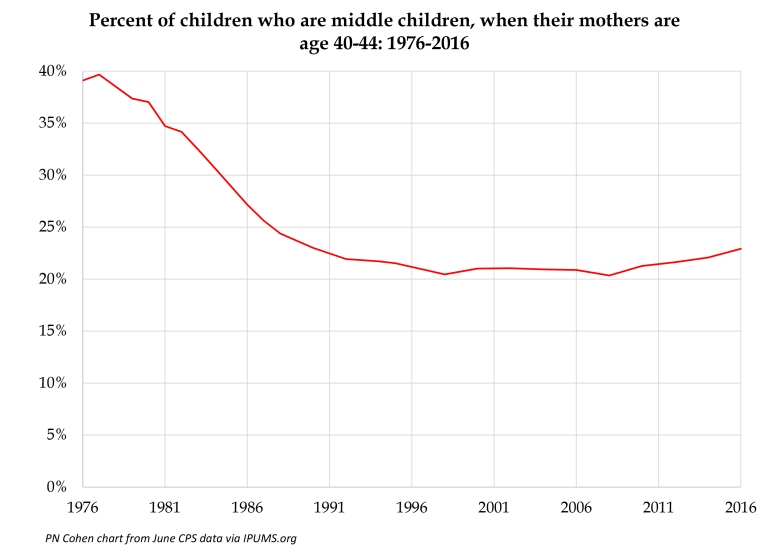 (Again, this assumes no one died before their mother turned 44, which did change over this period, especially as violent crime rates among young men fell. You could do something fancy to estimate that.)

So, it looks to me that, for the last 25 years, about 20-25 percent of children have been middle children.

On the other hand, looking in the longer run — much further back than Sternbergh’s starting point of 1976 — it’s clear that the proportion of children growing up as middle children has declined drastically. One quick and dirty way to show that is in children’s living arrangements. The final figure uses Census data (decennial till 2000, then American Community Survey) to show how many children are living as the only child, one of two, a middle child, or as the oldest/youngest in a three-plus family. This is messy because it’s just whoever is living together at the moment. So this is answering a question more like, “what proportion of children at any given time are living with an older and a younger sibling?” Here’s the trend:

Wow! In 1850 half of all U.S. children had an older and a younger sibling in the household with them. Now it’s below 20 percent. Still no drop since 1990, but the long-term change is impressive. So if all that personality stuff is true, then that’s a big difference between the olden days and nowadays. Definitely going to put this in the book.