This updates a series of posts that have addressed gender in academic sociology, starting in 2011 and updated in 2015, along with various tweets (to see random fact tweets from me on Twitter, Google familyunequal “now you know”).

Gender in academic sociology is complicated because the profession is running pretty female these days, with more than half the U.S. PhDs going to women since 1994, and more than 60% overall since 1999. So although there are various kinds of exclusion, it’s not as simple as excluding women from the discipline, and the representation of women’s representation depends on the choice of denominators. For example, a recent report found that, in the top 100 U.S. sociology departments in 2012, women were 60% of the assistant professors, 54% of the associate professors, and 34% of the full professors. This probably reflects a combination of age and tenure, with this year’s full professors representing yesteryear’s hiring, as well as women having lower rates of progression up the hierarchy.

Also, feminists (myself included) cheer the entry of women into formerly male-only professions but bemoan their concentration into female ghettos, but there is no bright line beyond which one process transforms into the other (don’t get me started on “tipping points“).

But however we want to interpret the trends, we have to know the trends. So here are some, starting with updates on previous reports (degrees, sections, elections), and then some new ones (journal articles, peer reviewers).*

The National Science Foundation reports the number and gender of PhD recipients by discipline (since 2006, earlier). This is what we get (smoothed with three-year averages): mostly more than 60% female since the late-1990s, with women accounting for most of the growth. 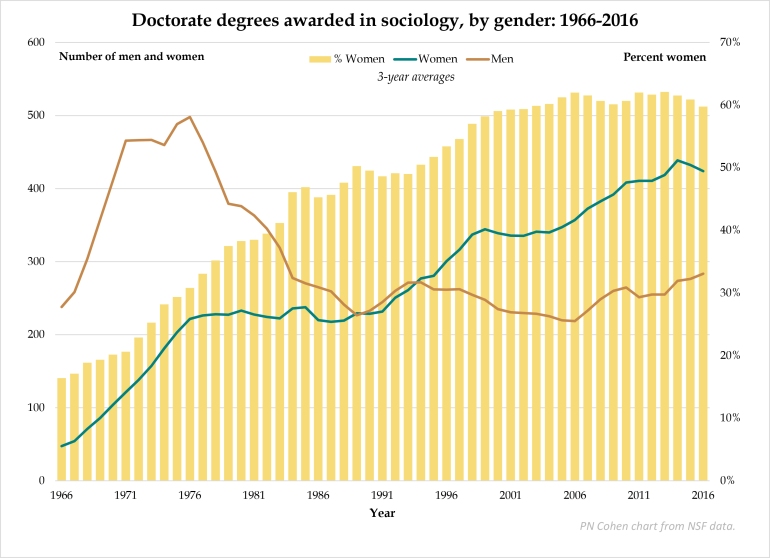 Sociology is a very broad discipline, including people who specialize in many distinct substantive and methodological areas. Within the American Sociological Association (ASA), we divide into 49 sections, which serve as a mechanism to organize conferences and journals, and to give awards (people can belong to as many as they want, for a small charge). The sections are pretty segregated by gender. Here are the gender compositions of each, from Sex and Gender (86% female) to Mathematical Sociology (22%): 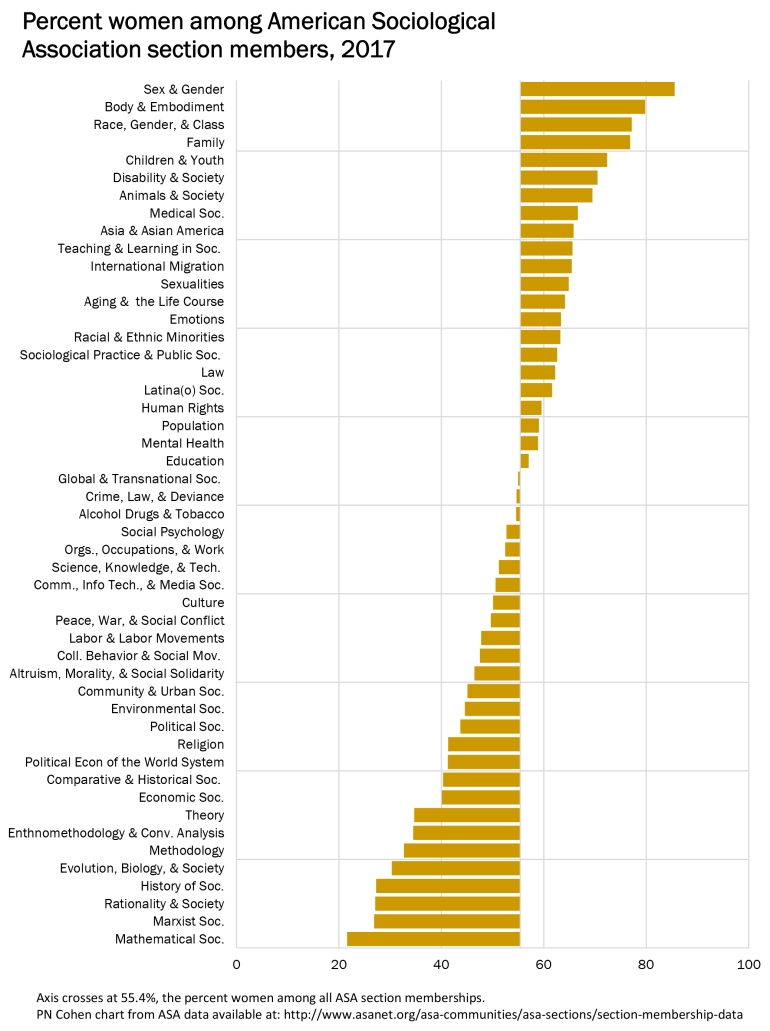 The ASA leadership is elected in annual balloting by the membership, which is open to anyone who wants to join as long as they claim some affiliation with the discipline (the price ranges from $51 for students to $377 for people with incomes over $150,000). The association elected its first president in 1906, its first woman in 1952 and its second woman in 1973. In the last 10 years 7 of the presidents have been women.

Is the shift toward women presidents because there are more women in the association, or in the hierarchy of the association, or because of the preference of the membership? The president, along with all the other elected officers, are selected for the ballot by a nominations committee. In recent years it has become conventional wisdom that men usually lose to women in these elections because ASA members vote for a woman if they don’t have a strong preference between candidates, but I don’t know how well-founded that perception is.

Here is the gender of candidates for top positions (president, vice president, secretary, and council members), and the gender of the winners, from 2007 to 2018. Note that in the last three years they have nominated fewer women, but except for 2016 the membership has voted for more women (with 2018 being having the widest gap yet): 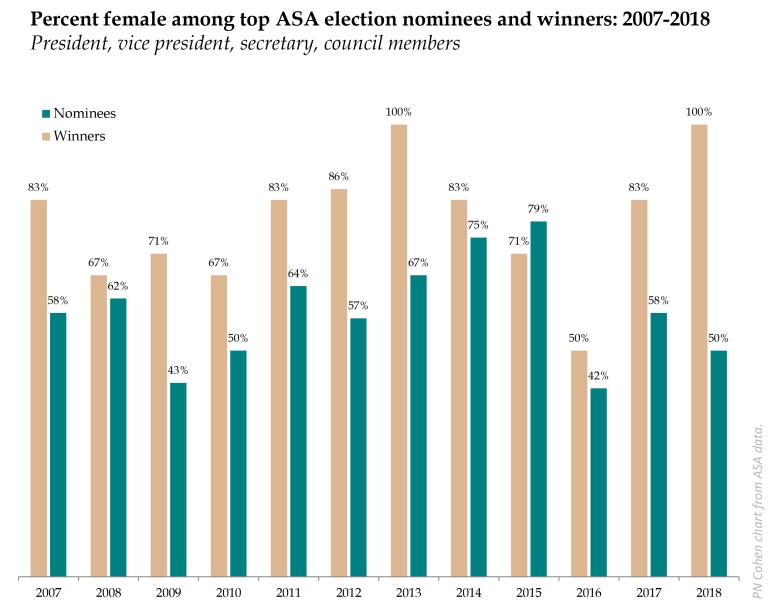 I’ve only done a little of this, but here is a quick look at the gender of authors in two of the highest-status sociology journals for the last several years. American Sociological Review (an ASA journal published by Sage), and American Journal of Sociology (an independent journal published by University of Chicago), 35% of authors in the last 11 issues have been women (by my assessment, regular articles only)

Someone could easily do a much more serious assessment of gender in sociology journal authorship.

For the last few months I have been working on peer review in sociology and the social sciences — how it works, how it doesn’t, and how it might be improved. (Here are slides from a talk I gave, with Micah Altman at MIT). One of my concerns about peer review is its general lack of accountability; no one supervises the process, generally, as the only person who knows everything at a journal is the editor, and the only thing the public sees is the published outcome. And yet publication peer review determines all manner of statuses in academia.

Looking for externally accessible data that might shine a light on the process, I checked for reviewer acknowledgement lists, which some journals publish at the end of a volume (lots of journals don’t apparently, including Social Forces, Sociological Methods and Research, Social Science Research, Sociological Forum, Sociological Theory, Work & Occupations, Social Currents, and Mobilization.) I used the genderize.io API to count the genders of the reviewers, using 80% confidence for the first pass, and then personally checking or Googling other names (I didn’t do all the names, but almost). 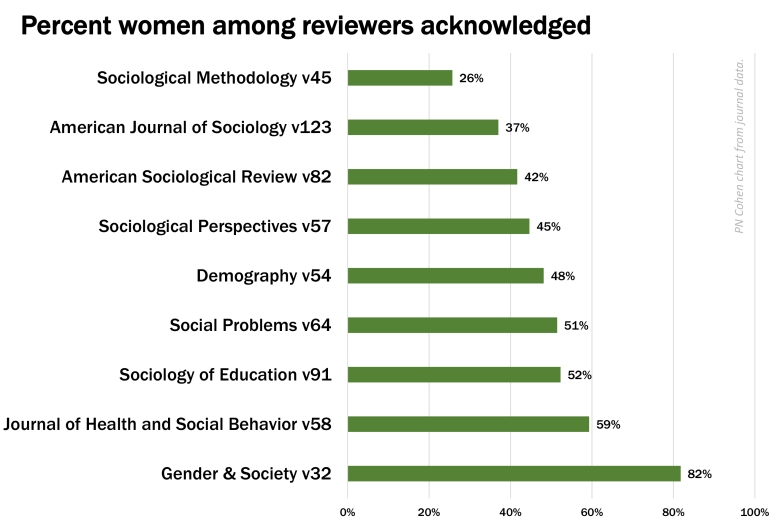 The reviewer gender shares are a little higher for ASR and AJS than they were for authors, with the former having somewhat more women. Publication in one of these two journals is the probably most important gatekeeping mechanism to the upper echelons of the discipline. The methods journal has the lowest representation of women, the gender journal as the highest. Unknown here is the proportion of women among the pool of reviewers solicited by the editors.

So, that’s my report.

* These data all treat gender as sex as binary, either because the data were reported that way, or because I coded them from names. I don’t address race, ethnicity, or other traits for the same reason.