I was on a panel at the American Enterprise Institute, titled, “Demographic decline: National crisis or moral panic?” The event featured Lyman Stone, who argued that “demographic decline” in the U.S. is a national crisis, and my reply. Nick Eberstadt from AEI also offered comments. The moderator was AEI’s Karlyn Bowman.

The video of the event (which was on CSPAN) is below.

In my presentation I used the projections and other material I described earlier, here (where you can also link to the data and package I used). The gist of my talk is that with immigration we don’t have an issue of declining population.

I also emphasized the political implications of catastrophic “demographic decline” talk, which are based on a combination of doomsday demographics and increasing race/ethnic diversity. For that part I included these two figures, which I worked up for the next edition of my textbook. The first shows Census Bureau projections of the U.S. population by race/ethnicity, which is the basis for the White supremacist panic. (Important caveat about this figure is the assumptions about the ethnic identity of the descendants of today’s Latinos, see Richard Alba.)

For the politics of immigration, which is a giant topic, I presented this very simple figure showing the rise of Latin American and Asian immigration since 1965. 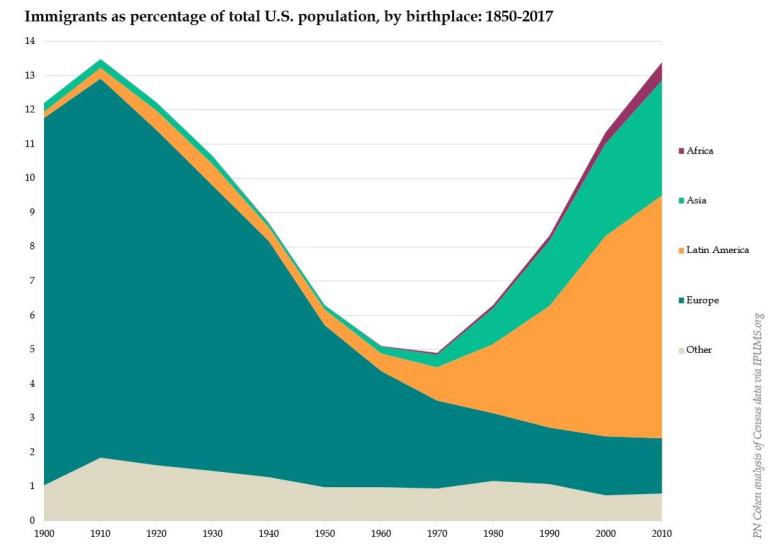 Here is the video on YouTube. If you prefer the CSPAN production style (or don’t want to give AEI click), theirs is here. My talk is 15 minutes, starting at 13:40.

Happy to hear your responses, including on the dicey issue of whether to participate in an AEI event.

(In the YouTube comments, the first person calls me a “Jewish supremacist” and demands to know my view on Israeli immigration policy, and another says, “This guy is through and through an open borders globalist.” So that’s the dialogue, too.)