Since 2008 the American Community Survey has been asking respondents whether they got married in the previous 12 months. Using the race/ethnicity of spouses (when they are living together), you can estimate the proportion of new marriages that cross racial/ethnic lines.

Defining such “intermarriage” is not as simple as it sounds. Some people have multiple racial or ethnic identities. Some people marry across national-origin lines within panethnic groups (e.g., Mexicans marrying Puerto Ricans). Is a Black+White Dominican marrying a White Mexican, or a Black+White person marrying a Black person, “intermarriage”? In these estimates I drop people who are not Hispanic and specified more than one race, then combine Hispanic origin and race into one, mutually exclusive 5-category variable: White, Black, American Indian, Asian/Pacific Islander, Hispanic (of any race). In other words, intrapanethic marriage (Mexicans marrying Puerto Ricans, or Filipinos marrying Koreans) is not intermarriage. I’m not saying this is the best way; it combines conventional categories with convenience. I combine same-sex and different-sex marriages.

To present the results, I separate men and women (you’ll see why), and estimate predicted probabilities of intermarriage at the mean of controls for age and age-squared, using logistic regression with normalized weights. My Stata code is on the Open Science Framework; help yourself. (I previously did something very similar for states and metro areas.)

The results are in figures, with each race/ethnic group presented on its own scale (check the y-axes). I don’t present American Indians because the samples are small (about half the API sample) and the multirace group is large. 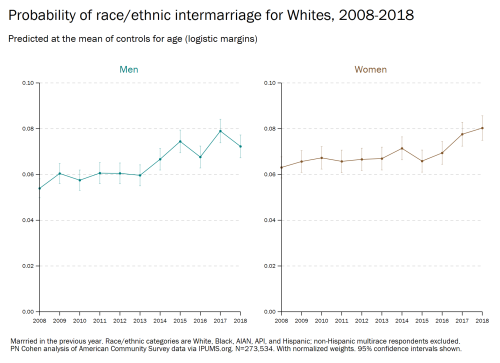