A couple new ones and a couple updates.

The pandemic could be affecting the number of abortions, miscarriages, or infant deaths, but unless those effects are large it should be too early to see effects on the total birth rate, given that we’re only about 7 months into it here. So for possible birth indicators I did a little Google search analysis using the public Google Trends data.

I found three searches that were pretty well correlated in the weekly series: “am I pregnant”, “pregnancy test,” and “morning sickness”, which all should have something to do with the frequency of new pregnancies. I ran Google Trends back five years, created an index from these searches (alpha = .68) , smoothed it a little, and this is what I got: 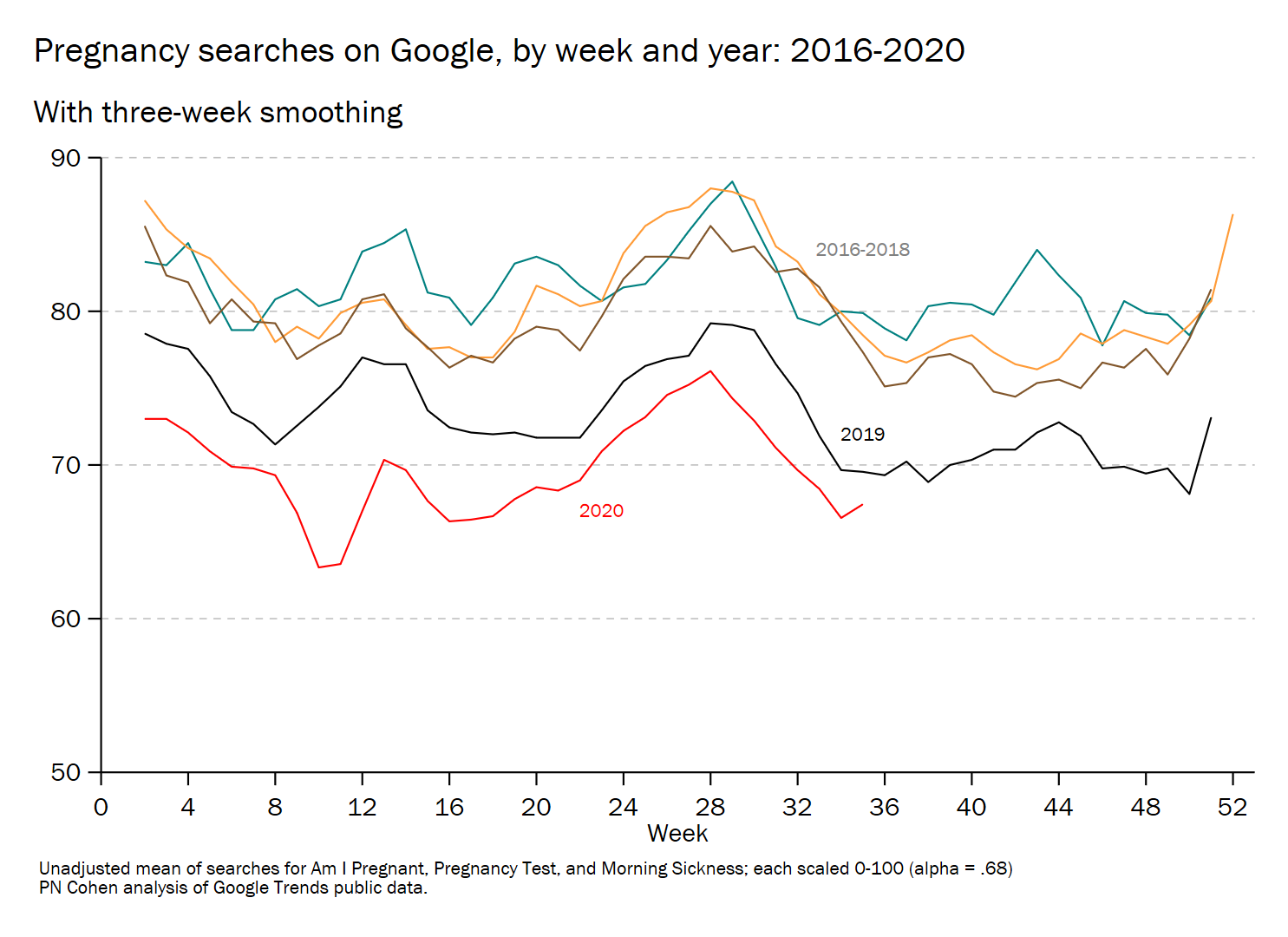 There was already a big drop in 2019 from the previous three years (reasonable, based on recent trends), and then 2020 started out with a further drop. But then it spiked downward in March before rebounding back to its lower level. So, maybe that implies birth rates will keep falling but not off the charts compared with recent trends.

I also checked “missed period,” which was not well correlated with the others, and got this:

Again, 2019 was already showing some decline, and 2020 started out lower than that, and now searches for “missed period” are running lower than last year, but not more in the middle of the year than they were in the beginning. So, inconclusive for pandemic effect.

March and April showed catastrophic declines in searches for wedding topics, and the rebound so far has been weak. However, weddings aren’t the same as marriages. Maybe people who had to cancel their weddings still got married down at whatever the pandemic equivalent of the courthouse is. So here’s the same analysis just for the search term “marriage license.” This shows a steep but not as catastrophic drop-off in March and April, and a stronger rebound. So maybe the decline in drop in marriages won’t be as big as the drop in weddings.

I previously showed the steep decline in recorded marriages in Florida. Here’s an update.

Florida lists recorded marriages by county and month, one month behind (see Table 17). They update as they go, so as of today August marriages are probably still not all recorded. The comparison with previous years shows a collapse in March and April, and then some rebounding. August is preliminary and will come up some. 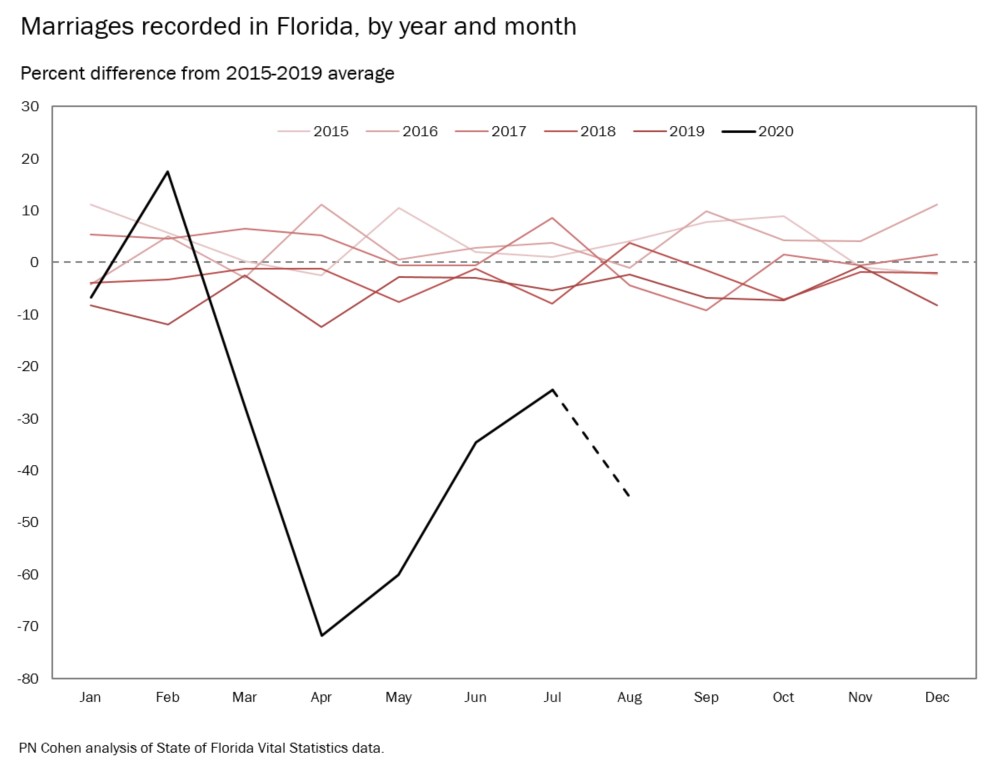 Marriages in Florida normally peak between March and May. Of course it’s too early to say how many of these were just being postponed. The cumulative trend shows that through July Florida is down 24,000 marriages, or 27%, compared with last year.

When the going gets tough, the afflicted want to get divorced, but maybe they can’t. It’s expensive and time consuming and maybe people think it will upset the children even more. (I’ve written about divorce and recessions here and here). So my initial assumption going into the pandemic was that there would be a stall in divorces even though the intent to divorce would rise, followed by a rebound when people get a chance to act on their wishes.

Here I use Google search trends for four searches: “divorce lawyer”, “divorce attorney”, “get a divorce”, and “how to divorce”. The alpha for this index is .69 (when I just use the attorney and lawyer, the alpha is .86, but the result looks the same, so I’m showing the wider index). The results show a drop in divorce ideation in March into April, followed by a rebound to a level a little above the previous year average. Note this pandemic-spring drop is a lot less pronounced than the wedding and marriage collapses above.

Divorces take time, of course. Like births, I wouldn’t expect to see definitive results right away. In fact, it’s hard to know how long divorces are in process before they show up as recorded. However, in my favorite real-time demography state, Florida, they have been recording divorces every month, and have a look at this:

It’s a giant plunge in recorded divorces, almost 60% in April, followed by a weaker rebound. Again, the records are not yet complete, especially for August, so we’ll see. But comparing these patterns, it might be that there was a short suspension in divorce ideation as people were distracted by the crisis, followed by a rebound which hasn’t yet translated into divorce filings. Googling about divorce seems cheap and easy (and faster) compared with pulling it off, but this might mean there is growing pent up demand for divorce, which is bad (and may imply greater risks of conflict and violence).

I previous wrote about young adults living with their parents and grandparents using the June and then July Current Population Survey data made available by IPUMS.org. Subsequently, the Pew Research Center did something very similar using the data through July (with additional breakdowns and historical context). Pew used living with parents, apparently including those in households where the parents are not the householders. I prefer my definition — young adults living in the home of parents (also, or grandparents) — which fits better with the popular concept of living “at home.” So if your parents come to live with you, that’s different.

Anyway, here’s the update through August, which shows the percentage of young adults living at home falling back some from the June peak. I will be very interested to follow this through the fall.

Update: By October this trend had returned almost back to pre-pandemic levels:

Stata code for the living at home analysis is available here: https://osf.io/2xrhc/.

The pandemic and its attendant economic crisis is having massive effects on many aspects of family life. These early indicators are just possible targets of future analysis. There is a lot of other related work going on, which I’ve not taken the time to link to here. Please feel free to recommend other work in the comments.