With everyone arguing about how much money MacKenzie Bezos should get in her divorce from Jeff Bezos, CNN asked me to write an op-ed. In it I argued that they are too rich and we could make divorce easier for everyone if we taxed away more of their money. I wrote:

There is a serious fairness issue here, but it doesn’t have to do with whether MacKenzie ends up with $1 billion or $68 billion. It’s that too many people can’t realistically exercise the same individual freedom that the Bezoses have — to choose to leave a failing or abusive marriage without facing crushing economic stress or hardship.

I called it, “There is a fairness issue with in the Bezos divorce (and it’s not about how much money MacKenzie Bezos will end up with),” which they changed to “The divorce issue that Jeff and MacKenzie Bezos don’t have to worry about.”

I agreed not to post the full text here. You can read it at CNN.

Time to update name trends, with the release of the 2017 data files from the Social Security Administration.

My hot take: Mary is back on the skids; Donald is going down, Alexa is over, and Malia shows that the resilience of humanity is not. Here are the details.

In Enduring Bonds I extend the Mary trend back to 1780, using Census data as well as Social Security records (and now is [always] an excellent time to get a review copy and consider it for your classes). The story is the mother of all naming trends, an unparalleled decline in name popularity, reflecting both the decline of conformity as an aesthetic and changes in how people see religion, parenting, and lots of other things. Then, for a couple years — 2013-2015 — it looked like maybe all the attention I gave the fate of Mary had prompted a revival, but now things are looking even bleaker than before, down another 4.3%. Here’s an updated version of the chart from the book:

Meanwhile, the decline of The Donald has taken on a new urgency. Although the name has been taking for a long time (its association with unpleasant character didn’t start in 2016), but last year’s decline was impressive, at -4.3%. Not a cliff, but a solid slide (this one’s on a log scale so you can see the detail): 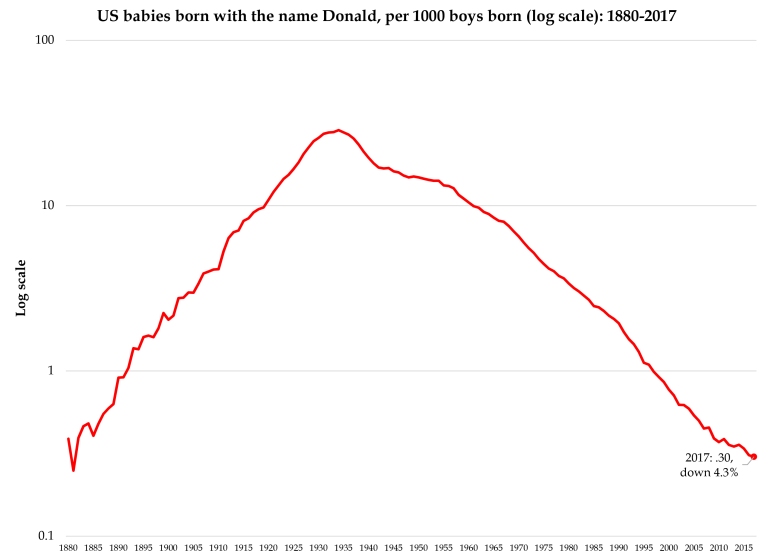 You have to feel for people who named their daughters Alexa, and the Alexas themselves, before Amazon sullied their names. Did they not think of the consequences for these people?  [Correction] Another bad year for Alexa. After a 21.3% drop in 2016, another 19.5% last year:

Finally, someone better tell the deplorables to start naming their daughters Ivanka, because in 2017 about nine-times more people are named their daughters Malia (1416) than Ivanka (167). Malia, up 15.4% last year:

On my OSF project I’ve shared the names data, the Mary code (Stata), and SAS code for making individual name trends. The whole series of posts is under the names tag.