Hanna Rosin, in The End of Men, says sociologists have described the collapse of the manufacturing-based white working class. But we have missed how that event has had different effects on men and women.

In fact, the most distinctive change is probably the emergence of an American matriarchy, where the younger men especially are unmoored, and closer than at any other time in history to being obsolete.

This is from the chapter that was excerpted in the New York Times Magazine. In it, she describes Alexander City, Alabama — a small town devastated by the vanishing manufacturing sector — and nearby Auburn, the nearby success story. These two towns are two sides of the End of Men — and her description of them is basically fiction.

In this fantasy, Alexander City has a “new domestic reality: the woman paying the mortgage, the woman driving to work.” She writes:

“I was born in the South, where the men take care of the women,” [Charles Gettys, a laid off textile manager] said. “Suddenly, it’s us who are relying on the women. Suddenly, we got the women in control.” This year, Alexander City had its first female mayor.

That last sentence is Rosin giving us the context. That spooky feeling of women encroaching, taking over: A female mayor. To help her illustrate this drama, I checked the composition of the city council for Alexander City and confirmed it — there is also a woman on the council:

(In fact, Mayor Barbara Young does not fit the mold of the leading edge of rising women, as described by Rosin. Instead, she seems more like the old-fashioned female politician: a retired school principal and widow of a judge, she is the mother of two politicians, Circuit Judge Tom Young and council member Bill Young [second from right], the latter of whom, despite a 1990s federal felony conviction, is himself now running for mayor this year.)

Anyway, this collapse of man is not just limited to politics. “Wherever I went in town,” Rosin writes, “I met couples like the Gettyses, where the husband was stuck in place and the wife was moving ahead.”

And they’re not all formerly well-to-do. She highlights another couple that fits that description, the young, unmarried Shannon and Troy. She works part-time at Walmart, studies nursing at community college and works as an exotic dancer to feed their young son. Troy sleeps till 11, except for the four days last month when he did a little work. You can tell when he’s awake because cigarette smoke starts coming out from under the door of his room in their trailer. Troy is not the only deadbeat, unemployed man in town. According to Rosin, in fact, when he does the family’s shopping, all he sees are “aisles and aisles of dudes” at the store.

To check out this male vacuum for myself, I took a ride down the information superhighway to the American Community Survey’s 2006-2010 file (you need 5 years to get estimates for small areas).

Given her description of Troy as the typical Alexander City deadbeat, I was surprised to learn that 77% of Alexander City’s 20-something men are employed, compared with only 53% of women. In fact, the employment rate is higher for men at all ages, and the employed labor force is 53% male.

Rosin quotes the local Southern Baptist leader, who’s also beating the “matriarchy” drum. “The real issue here is not the end of men, but the disappearance of manhood.” Literally. That probably explains why there’s also a woman among city government’s department heads:

What does that one woman do? She is in charge of the city’s Senior Nutrition program. And so it begins: the matriarchy’s pedicured toe creeps a little further up the ladder.

Down the road is the success story: Auburn, “the one city [in eastern Alabama] that got it right.” The secret?

Auburn has become the region’s one economic powerhouse by turning itself into a town dominated by women.

Wow – dominated by women. A strong claim. What’s the evidence? Well, she starts with the thing about young women earning more than young men (without even mentioning that only includes never-married, childless, full-time workers). In fact, Auburn is a “perfect reflection of the modern, feminized economy: a combination of university, service, government jobs, with a small share of manufacturing.”

She launches into an anecdote about a woman who “works in the female-dominated economic development department” (that department is actually directed by a man), and her “three best girlfriends … a consultant, a lawyer, and an engineer.”

That’s should be enough evidence to support the “dominated by women” claim. But, to bring it home, she asks, “Does any place still belong to the men”? And goes to a manufacturing plant, but even that has recently “tipped to 55 percent women.” (The city’s manufacturing industry employees are actually 32% female, says the Census.)

…or the city government’s department heads…

…or, because it’s a university town, the university’s top administration and board of trustees: 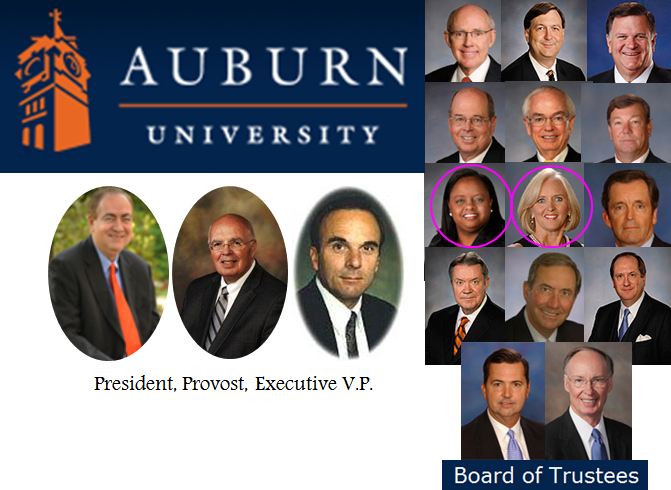 I wouldn’t go so far as to say married couples in Auburn “belong to the men.” But a lot of their income does. As I showed previously, among married couples in Lee County, Alabama (home of Auburn), those with women earning none of family income outnumber the reverse by 32-to-1: 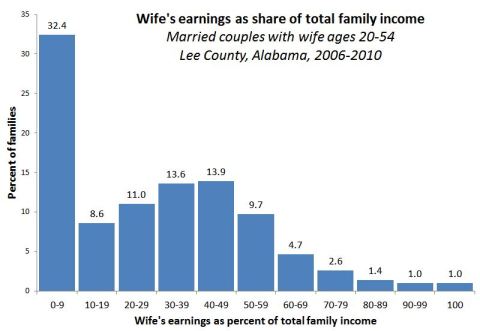 If Rosin really wanted to see what male domination looks like, she could have checked the Census data (5-year ACS file), and found out:

Women are very sneaky, concealing their domination like that.

But seriously: I do believe there is an important and interesting story to tell about what happens to gender and families when economic fortunes decline asymmetrically by gender. I’d love to read that book.

In this weekend’s New York Times Magazine, Hanna Rosin’s cover story is adapted from her forthcoming book The End of Men. The question posed on the cover is, “Who Wears the Pants in This Economy?” (Spoiler alert: it’s men).

The article profiles married-couple families with unemployed or underemployed men depending on the incomes of wives working in the new economy. Her handful of anecdotes are accompanied by ominous images like this (her triumphant and resolved, him a shell of his former self):

The anecdotes are fascinating and well told, but they are also grossly overplayed. In one interview, she reports:

When I talked with Patsy in the family room at their house, she forbade Reuben to come downstairs, because he can sometimes dominate conversations. She quarantined him on the second floor, and I caught glimpses of him carrying a basket of laundry.

For Rosin, all this points to a “nascent middle-class matriarchy” in which “It’s not hard to imagine a time when the prevailing dynamic in town might be female bosses shutting men out of the only open jobs.”

But is it too much to first imagine the way things actually are?

The families she profiles live a short drive from Auburn, Alabama. Auburn, she reports, is “a reflection of the modern, feminized economy: a combination of university, service and government jobs.” It is “an especially good place for women,” where “young, single, childless women in their 20s working full time have a higher median income than equivalent young men.” (On this grotesquely contorted statistic, also anchoring Liza Mundy’s book, see this post.)

But the couples in her story – where the women are wearing the pants – aren’t young, single, and childless. So, what is happening with real married couples? Auburn makes up about half the population of Lee County. So I took a look at the roughly 25,000 married couples in that county sampled by the American Community Survey in the years 2006-2010, restricted to those in which the wife is in the age range 20-54.

For each wife, I asked what percentage of the family’s total income comes from her earnings. Here is the distribution of wives’ earnings share: 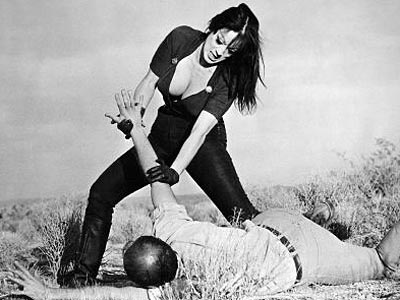 This isn’t the whole story of the “nascent middle-class matriarchy.” But debunking The End of Men is a multi-post process (here’s the most recent), leading up to a presentation I’ll give (among many others) for a conference at Boston University in October.