I have criticized sloppy statistical work by some international feminist organizations, so I’m glad to have a chance to point out a useful new report and website.

The Progress of the World’s Women is from the United Nations Entity for Gender Equality and the Empowerment of Women. The full-blown site has an executive summary, a long report, and a statistics index page with a download of the complete spreadsheet. I selected a few of the interesting graphics.

Skewed sex ratios (which I’ve written about here and here) are in the news, with the publication of Unnatural Selection, by Mara Hvistendahl. The report shows some of the countries with the most skewed sex ratios, reflecting the practice of parents aborting female fetuses (Vietnam and Taiwan should  be in there, too). With the exception of Korea, they’ve all gotten more skewed since the 1990s, when ultrasounds became more widely available, allowing parents to find out the sex of the fetus early in the pregnancy.

The most egregious inequality between women of the world is probably in maternal mortality. This chart shows, for example, that the chance of a woman dying during pregnancy or birth is about 39-times higher in Africa than Europe. The chart also shows how many of those deaths are from unsafe abortions. 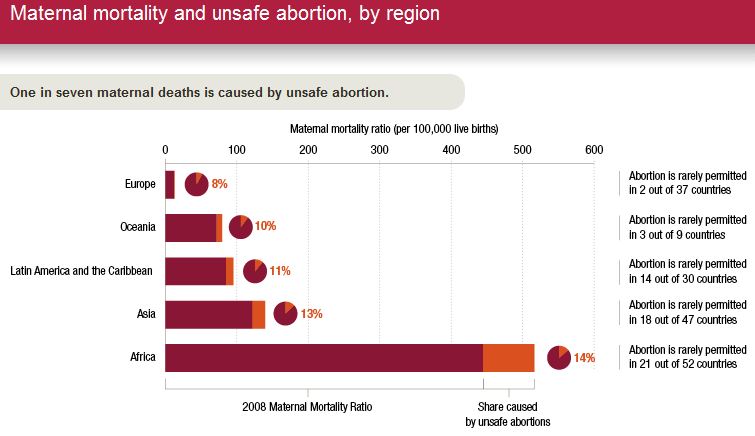 Finally, I made this one myself, showing women as a percentage of parliament in most of the world’s rich countries (the spreadsheet has the whole list). The USA, with 90 women out of 535 members of Congress, comes in at 17%. 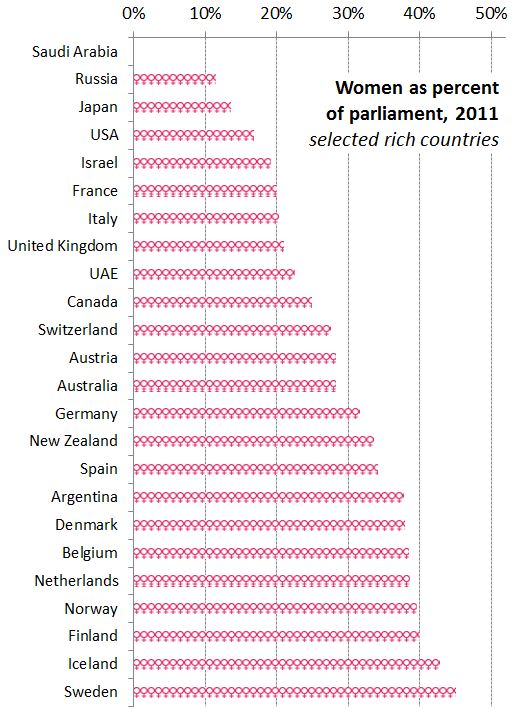 The report focuses on law and justice issues, including rape and violence against women, as well as reparations, property rights, and judicial reform. They boil down their conclusions to: “Ten proven approaches to make justice systems work for women“:

Below are ten proven approaches to making justice systems work for women. They are achievable and, if implemented, they hold enormous potential to advance women’s rights.

2. Support one-stop shops and specialized services to reduce attrition in the justice chain [that refers to rape cases, for example, not making their way from charge to conviction -pnc]

4. Use quotas to boost the number of women legislators

5. Put women on the front line of law enforcement

7. Increase women’s access to courts and truth commissions in conflict and post-conflict contexts.

10. Put gender equality at the heart of the Millennium Development Goals

What is the basis for women’s global unity?

The other day I discounted the idea — expressed in the myth of women owning less than one percent of all property in the world — that women share a universal propertylessness. “If global feminist unity is to be had,” I said. “It won’t be built on a shared poverty experience.” One person commenting on the Huffington Post retorted: “The shared experience of women is patriarchy.” And she challenged me to produce a “gift-wrapped statistic that might make people think twice about gender inequality.”

I don’t have it. But for discussion, consider maternal mortality. I have previously shared the worldwide trend (except in the U.S.) toward reducing maternal mortality — the deaths of women related to pregnancy and childbirth. For every 10,000 live births in the world, 260 mothers still die.

This isn’t a risk all women face, since many have no pregnancies or births, but it’s something that is unique to women (more so even than rape). It is at least a potential risk women have in common.

In reality, however, the risk is so unevenly distributed as to virtually undermine its universality. In Sub-Saharan Africa, among all women, one out of every 31 women is estimated to die from maternal causes; in Western Europe that number is one-in-8,800. That is partly because African women have more children, and partly because they are more likely to die during each pregnancy or birth.

Those numbers are from a new data sheet published by the Population Reference Bureau. They estimated the lifetime chance that a given woman would die from maternal causes (factoring in both birth rates and risks of death). I’ve converted those to deaths per 10,000 women, by world region: 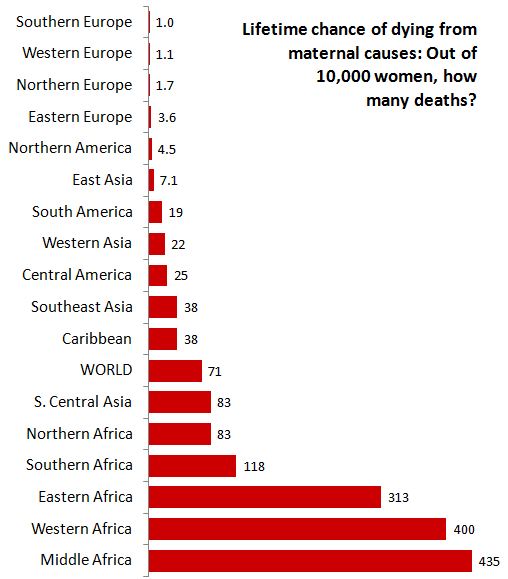 As is the case with wealth, statistically anyway, the women of the richest countries have more in common with their male peers than they do with the women at the bottom of the scale. So this isn’t the gift-wrapped statistic for global feminist unity based on shared personal risks. But do people need to experience the same hardships in order to unite against them?

Give or take, a billion people are undernourished (on Earth, which is as far as the data extend). It’s been a very rough couple of years for world hunger, but the UN estimates that 2010 is looking a little better than last year.

In the U.S., the situation is much better. There are 42 million people receiving food stamps — or 14% of the population — but at least they’re getting food stamps. Poverty and malnutrition here take a toll on a smaller scale — easy to say, of course, from a big-numbers point of view. If the UN says only 19 million people in the rich countries are seriously undernourished on account of poverty, here the issue is less total nutrition and more food security and proper, safe nutrition.

According to the American Dietetic Association, 15% of households, or 49 million people, experienced food insecurity at some time during 2008 — which represents a dramatic 32% spike from 2007, after eight years of relative stability, according to the New England Journal of Medicine. The problem is concentrated most among the poor, single parents, and Black and Latino families, who all had higher-than-average insecurity rates: 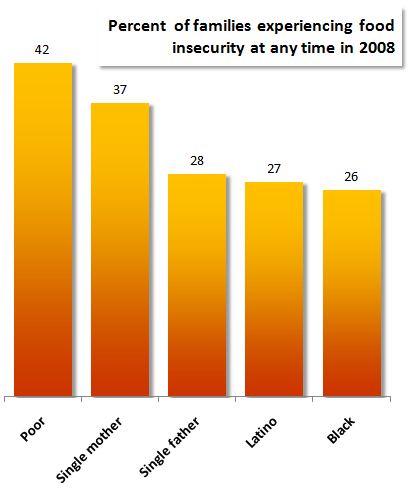 In the U.S., children whose families suffer from ﻿food insecurity﻿ have more health problems, but also lower academic achievement as well as psychological and behavioral problems. Food insecurity has pernicious effects on health for adults as well. Even controlling for age, gender, race, educational attainment, and income — and limiting the analysis to adults below the poverty line — those experiencing food insecurity are more likely to have high blood pressure, high cholesterol, and diabetes. According to the NEJM article, this is how it might work: 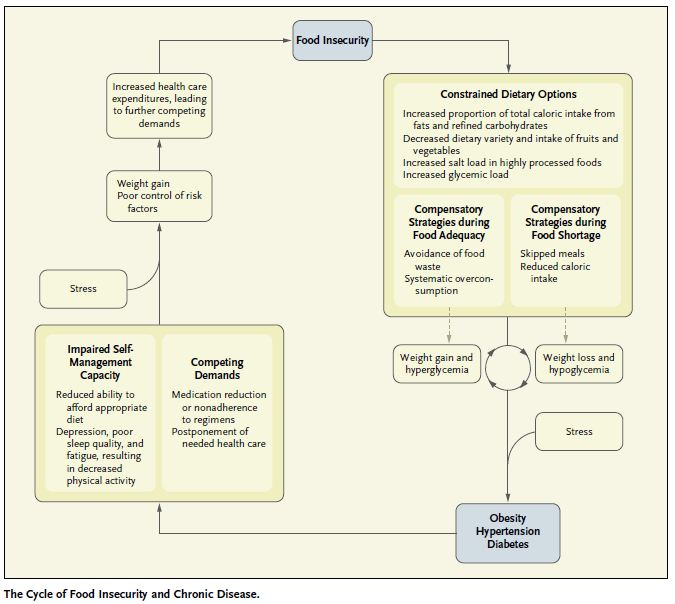 Finally, we need to remember that families are not individual actors, but groups of people tied together in complex an unequal ways. Like money, power, and violence, food itself is unequally distributed within families. This has mostly been the subject of studies in poor countries, where economic pressure comes down harder on some family members more than others — sometimes to the benefit of men, sometimes male children. But even in the U.S., where hunger is much less prevalent, recent evidence suggests children are less likely to suffer food insecurity when mothers, rather than fathers, control the family budget.

Researchers at Brandeis University compared family net worth (excluding home equity) between 1984 and 2007. They report:

The report is not clear on how the data, from the Panel Study of Income Dynamics, are handled. They write that it reflects “the same of families over 23 years (1984-2007),” and “changes in wealth of families headed by an adult (age 25-55) in 1984.” If that’s the case, lots of these folks would have died, family composition would have changed, etc., and they don’t say how all that affects the analysis.

But if I read it right, they break them into income groups based on their 1984 incomes, and track them through the next 23 years. In that case, I’m especially struck by lack of progress among African American families with higher incomes at the start of the period. While the high-income White families saw their net worth increase in the last generation, Black families with higher incomes did not gain ground asset-wise. 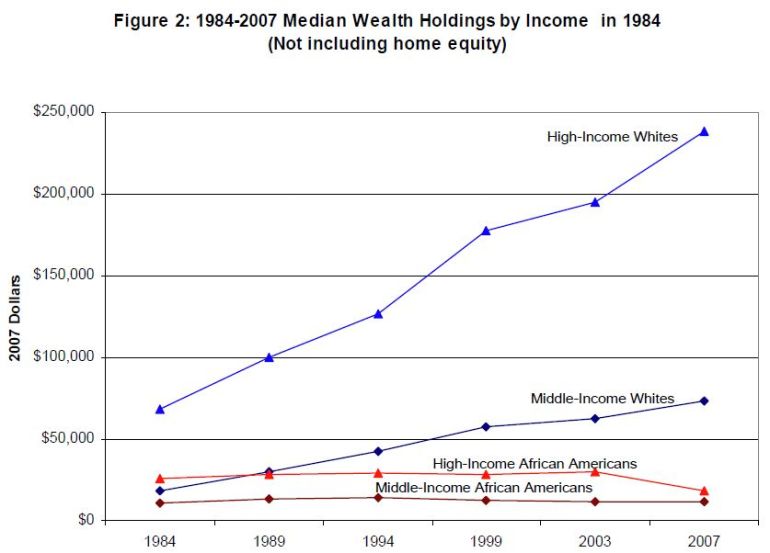 The report has references to some of the literature on race and wealth issues, making it a good place to start on the subject.

While we’re on the subject, a little global context. From a 2008 U.N. working paper, per capita wealth circa 2000: 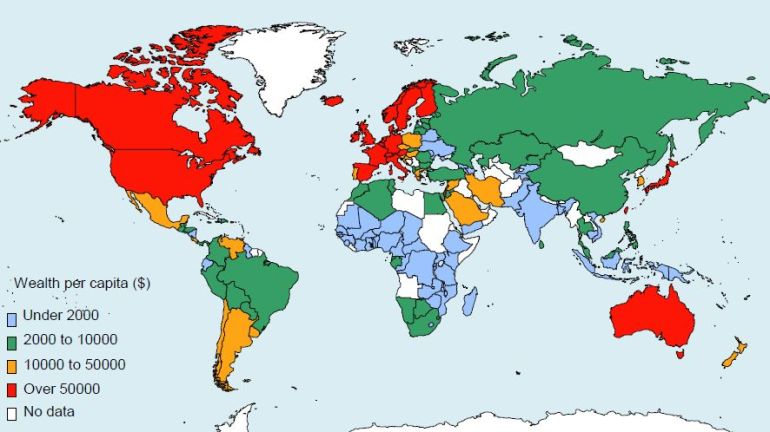 Comparing wealth measuring across societies is hard, especially with exchange rate issues, data quality, etc. This global data, for example, uses means instead of medians, and includes home equity, so the numbers don’t compare to the Brandeis study. But the pattern is good to see anyway.

For a more thorough discussion of the global questions, including but not limited to data issues, there is a new book by  Roberto Korzeniewicz and Timothy Moran — a former professor and classmate of mine from Maryland, respectively — called Unveiling Inequality A World-Historical Perspective. I haven’t read it well enough to write my own blurb yet, but here’s the promo page conclusion:

Korzeniewicz and Moran provide strong evidence that the nation where we are born is the single greatest determining factor of how we will live. Too much sociological literature on inequality focuses on the plight of “have-nots” in wealthy nations who have more opportunity for social mobility than even the average individual in nations perennially at the bottom of the wealth distribution scale. Unveiling Inequality represents a major paradigm shift in thinking about social inequality and a clarion call to reorient discussions of economic justice in world-historical global terms.

A major summit meeting with “400 government officials and academics from 65 countries” has concluded in Istanbul with the adoption of a declaration calling for “worldwide efforts to achieve gender equality and empower women.”

The declaration has a nice statement on gender inequality:

Gender inequality is deeply rooted in entrenched attitudes, societal institutions and market forces, therefore, political commitments at the highest international and national levels, and especially, actions at the local level are essential. Political commitments can allow the adequate establishment of policies that can target social changes and to allocate the necessary resources to achieve Gender Equality and Women’s Empowerment. Gender is social construct. It defines and differentiates the roles, rights, responsibilities and obligations of women and men. And those differences form the basis of social norms that defines behaviors for women and men and determine their social, economic and political power.

Powerful stuff. What is this summit, and whom does it represent? (And why do they only distribute tiny versions of the summit logo?)

It is a forum for the World Family Organization, a United Nations body with representatives comprising NGOs and official agencies from almost all countries. The United States is listed as a participant, but has no officers in the executive.

A Google news search on the title of the summit produces stories from Xinhua, the Turkish Press, Hurriyet and other Turkish sources, but – go figure – no U.S. news sources. I guess there is only so much room for the issues of the day on the American screen.