Recently I was invited to be interviewed by Fox News Channel for “a series of stories about changing demographics and how they’re impacting politics, policy, and our culture.” Specifically, the producer said they wanted to interview me about “your recent research on millennials and marriage and divorce rates.”

This raised the recurring question faced by responsible academics: Should I appear on Fox News? For those of us who love attention, it’s hard to say no, but I did consider saying no. I figured the segment would be a right-slanted take, but also hoped that since it was for a news program, rather than an opinion program, it might be moored to reality, and I thought I might have a chance to interject something useful, or at least true. (This differs from my previous appearance, with Tucker Carlson.) Whether to differentiate at all between news and opinion on FNC is an interesting question in itself.

So I did it, and it aired yesterday. Since I lent it legitimacy I should also correct the errors they made. Comments below the video:

Here are some comments and corrections. First, the beginning is just a fear-of-change narrative:

“As we head into 2019 you may look back and think about how much has changed, not just in the past year, but in your life. And it’s not just you. America’s population, our culture, it is all changing.”

It’s setting viewers up for doom, where change is ominous out of control, the audience tearing down that precedes the build up of the authoritarian leader. Anyway, that’s to be expected, along with the boilerplate right-wing statements about marriage, women, welfare, and single mothers, which I won’t detail here.

They never did ask me about my research on marriage and divorce, but we did talk about fertility. So then he says:

“The US is facing a demographic crisis that JFK could not have imagined: A fertility rate of 1.8 percent. That means the US is not producing enough to sustain its population.”

Don’t ask what JFK has to do with this. But the fertility rate is not “1.8 percent,” it’s 1.8 projected births per woman, and it’s not a demographic crisis.

In the interview, I tried to focus on inequality and insecurity in every answer, figuring that was the angle they might let into the piece. This is what they ended up using:

I’m happy with this, a true statement, not distorted or taken out of context. The chyron they put below me is bad, however: “Lower U.S. Fertility Rates Creating Society Upheaval.” “Upheaval” is a strong word, but in any event the causality is reversed: social instability is driving lower U.S. fertility rates. Whatever effects falling fertility will have on society, they’re not here yet anyway.

“The US is compensating for lower fertility rates with another demographic change: an increased reliance on immigration.”

The US doesn’t exactly have a policy of responding to falling fertility by welcoming immigrants. But it’s true that immigration is buttressing the US from the potential effects of slower population growth. In the last 25 years the immigrant share of the labor force has increased from 12 percent to 19 percent. That is pretty clearly the solution — if we need one — to falling population growth. But this quote from Victor Davis Hanson, Hoover Institution is ridiculous:

“In the case of the right, they want people to work more cheaply than native-born citizens. And on the left they want a further argument, or an agenda for big government.”

Finally, the conclusion brings it back to fear of change:

“These demographic changes help to partly explain the resurgence of socialism in the United States. A Gallup poll from August found that young adult Americans are more positive about socialism – 51 percent – than they are about capitalism – 45 percent. That’s a 12-point swing in only two years.”

I have no idea how you connect “these demographic changes” to the (excellent) rise in positive perceptions about socialism. But the 12-point change in two years was only in young adults’ (age 18-29) attitudes toward capitalism. During that time their attitude toward socialism declined as well, so the gap went from -2 to +6, or an eight-point swing. Here’s the trend from Gallup: 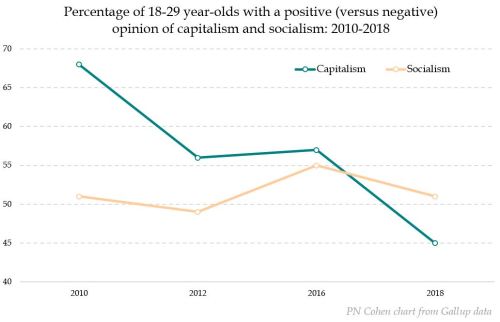 In conclusion, I got to say something I wanted to say, and it added something to the piece they wouldn’t otherwise have included. Whether that makes it worth participating in this I can’t say.

The segment above was the first of three. I discuss the other two here.