A step toward civilization (and have more children), Shanghai edition

Over the course of two weeks in China, I saw several versions of signs like this:

This one is posted in the old-town section of Nanxun (now a tourist attraction), naturally, above a urinal.* Invoking civilization may be overblown for the problem of men standing too far away (which didn’t seem to be especially extreme, compared to U.S. urinals), but China has a long tradition of using dramatic slogans to call citizens to higher common purpose. Here was one that struck me, in downtown Shanghai:

Every family striving to become a civilized family; everyone involved in its creation (家家争做文明家庭; 人人叁与创建活动).

This is from the Shanghai public health authorities. (No, I don’t know Chinese, but I love trying to use a dictionary, and I ask people.) The fascinating thing about that is the composition of the civilized family pictured: father, mother, two grandparents, and two children.

Fertility rates in China are well below replacement level, as they are in other East Asian countries, meaning the average woman will have fewer than two children in her lifetime and the population will eventually shrink (barring immigration). China’s total fertility rate nationally is probably at about 1.5. In Shanghai, a metro area with some 20 million people, the norm was already one child per family before the one-child policy was implemented in 1980, and fertility has continued to fall; it most recently clocked in at a shockingly low .88 per woman as of 2008.

Reasons for ultra-low fertility are varied and contested, but likely culprits include expensive housing and education costs for children. It was reported to me informally that about half of children can go to college-track high schools instead of vocational schools, and that is determined by a standardized test administered at the end of middle school. That puts tremendous pressure on parents with middle-class aspirations. Which helps explain the extensive system of expensive supplemental private education, as promoted by this ad I saw in an upscale mall:

The website for this company promises, “Super IQ, Wealth of Creativity, Instant Memory Capacity.” How many kids are you going to send to this private program?

One of the five perfect, super-involved parents at the parent-child class is a man, which may or may not seem like a lot. Of the many people taking their kids to school on scooters, I didn’t see a lot with more than one child, and the only picture I got was of one piloted by the apparent dad (note also something you don’t see here much: schoolboy in pink shirt):

This recalls another probable cause of low-low fertility, the gender-stuck family and employment practices that keep women responsible for children and other care work (scooter dads notwithstanding). In conjunction with women outperforming men in college graduation rates these days (as in the U.S.), this indirectly reduces fertility by leading to delayed marriage, and directly reduces fertility by causing parents to decide against a second child.

The weak system of care hurts on both ends, with people having fewer children because raising them is expensive, and people needing children to take care of old people because public support is lacking. This may be one reason why grandparents can have a positive effect on parents’ motivation to have children, as reported by Yingchun Ji and colleagues (including Feinian Chen, who hosted my visit). The fact that it is common for grandparents to provide extensive care for their grandchildren, as Feinian Chen has described (paywall), presumably helps strengthen their pronatal case.

Lots of pictures of grandparents taking care of a single grandchild to choose from. Here’s one, from the (awesome) Shanghai Museum: 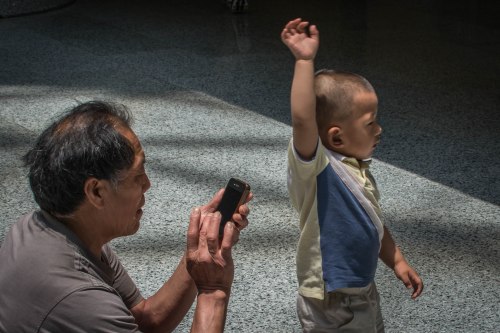 The one-child policy ended in 2016, and couples no longer have to get permission to have a first or second child (but they do for a third or more). This change alone, although a better-late-than-never thing, may not do much to increase birth rates. That is the conclusion from studies of families for whom the policy was relaxed earlier. Sadly, although birth rates were already falling dramatically in the 1970s and the one-child policy was not responsible for the trend, the policy still (in addition to large scale human rights abuses) created many millions of one-child families that will struggle to meet intergenerational care obligations in the absence of adequate public support. (Here’s a good brief summary from Wang Feng, Baochang Gu, and Yong Cai.)

This is a challenge for civilization.

The pictures here, and a few hundred more, are on my Flickr site under creative commons license.

* Americans who love the funny translations of signs in China may be in for some disappointment, as the Standardization Administration has announced plans to implement thousands of stock translations in the service sector nationwide.

What, my workers? (Hershey park edition)

The previous post was about interracial civility at Hershey Park.. This is about something else I noticed there.

The “free” “chocolate” “tour” at Hershey Park is probably not best enjoyed on a Saturday in August while the roller coasters are closed due to inclement weather. Unless what you enjoy is people watching — which, although an odd omission from the tour itself, you will have plenty of time to do in line.

The tour promises “NEW features,” including:

When you finally get to the little train car that will take you on the tour, you ride past a series of big video screens showing machines, some big machines simulating chocolate-making, and some fake cows:

The voices you hear belong to a woman who says she’s a quality control expert, and some animated or mechanical pieces of candy. There are literally no humans visible on the immersive tour of chocolate making. Hershey of course does have many people working to make chocolate for them, in Mexico and Brazil and Pennsylvania, among other places. But the tour designers who figured out how to pump chocolate smell into the confined, warmed, darkened, orange-glowing oven your car creeps through to simulate roasting, decided not to include any reference to those workers.

At the very end, a high-school aged temp worker hands you a free sample, though! 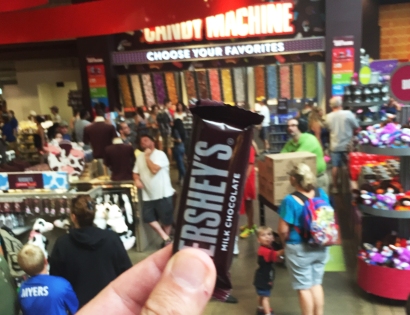 Filed under Me @ work, Uncategorized

Selfie culture, tourism, and the challenge of the authentic self

The author on vacation.

Our family vacation this summer, to London and Paris, was my first since the Year of the Selfie Stick (which is this year). This is also the year in which 59% of “millennials” (only 40% of whom understand that they are millennials) answered “yes” when asked whether the phrase “self-absorbed” describes “people in your generation overall”?

I can’t add much nuance to the theory of selfie culture, which has already taught me a lot. For example, I learned on NPR that vanity isn’t vanity if it’s part of constructing your “personal brand” — so it’s OK to edit your selfies:

“I think that while a lot of people find it easy to say, ‘Well, you’re taking a photo of yourself, and you’re posting it online for people to sort of rate.’ I could see how that superficially looks like vanity,” she says. “At the same time, I think that it really gives a lot of the younger generation a platform to express themselves without being incredibly harshly judged — because the selfie is such a casual form of expression, no one is going to expect you to look absolutely perfect.”

What interested me is the intersection of artificiality and authenticity that the selfie brings to the experience of tourism. Taking 1,000 pictures of yourself in order to post just the right spontaneous look is the normal business of personal brand construction. It creates a presentation version of yourself. It’s an expected form of inauthenticity, just like most people expect you won’t post pictures of your kid crying at her birthday party.

But when you’re a tourist, selfies are about authenticity. They’re the picture that proves you were really there — and really in that mood at that moment that you were there. As the culture studies journal Forbes Leadership put it:

In the age of social media, authenticity for Postmoderns is characterized by a consistency and continuity between their online personas and their lives in the real world. The more congruence there is between the two, the more authentic the Postmodern appears to be.

You can’t have that unless the famous thing is clearly visible behind you. Which produces the endlessly entertaining spectacle of tourists taking and retaking selfies with every different expression and pose in front of popular monuments and attractions.

Social media is social. We share pictures and updates with real people. Even when you’re alone, you’re not alone on social media. Which I think is great. But like the person staring at his phone through dinner, it seems antisocial when you do it publicly. The selfie-takers are alone in their Instagram bubbles in the middle of a sea of other people.

And when you’re going in for the money shot — say, the Eiffel Tower at sunset — you can’t afford to mess around. It seemed like these people were oblivious to me setting up for a shot of them from 10 feet away. (Also, like driving, it seems that operating the selfie stick in different-sex couples is the man’s job.)

At the Eiffel Tower.

Or, in this case, the daughter totally not noticing that her parents are collapsing from boredom while she works up her umpteenth Buckingham Palace selfie.

I have nothing against all this. (Our story is that every moment of the vacation was deliriously fun, and we have the pictures to prove it.) Having a good time seeing new people and things without hurting anyone is what I love about tourism. 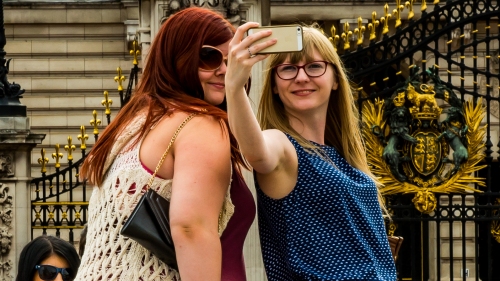 Still, it’s funny that people go to such trouble to get the perfect picture of themselves — creating at least a moment that is artificial — in their quest for an image of authenticity. What would this picture mean if I weren’t really in Paris, contemplating all there is to contemplate in exactly that spot?

As affirmed by the behavior of thousands of people crowding around to take pictures of famous paintings, perfect reproductions of which are available online for free, it has to be real or it’s nothing. A lie.

The fake-smile selfie is a lie, too. I guess it’s just not a very important one.

One disappointing thing, though, is that suddenly the ritual of strangers asking each other to take their pictures is disappearing. That was a nice part of tourism, because it involved strangers smiling at each other.

Note: Help yourself to these photos, which are in this Flickr folder.