Confusing the facts with the issues.

The other day I picked on the Heritage Foundation’s post, “Poverty Explodes, Root Cause Is the Collapse of Marriage.” In that post, they conclusively demonstrated two things: first, that children of single parents are more likely to be poor; and second, that more children are born to unmarried parents now than in the past. The dots they didn’t connect were between family structure and the child-poverty “explosion.”

In the comments on the post, Jay Livingtson reasonably asked, “Why didn’t he add a line showing rates of child poverty to show that it tracks with the Death of Marriage?”, and Wanda pointed out, “I don’t see that you refuted the information in any way.” I didn’t empirically refute the ideological claim of the HF guy because I didn’t show the relationship between child poverty and single-parenthood.

Looking at the graph below, which Jay asked for, the intellectual-history reason seems clear — his is an old collapsing-society story, that hasn’t been in the news much because the association broke down in the 1980s, when the news was all about single parents, crack, homicide, and welfare. Ten years ago I used to assign this book by Ruth Sidel, which put it all together very nicely.) She

shows how America, in its search for a post-Cold War enemy, has turned inward to target single mothers on welfare, and how politicians have scapegoated and stigmatized female-headed families both as a method of social control and to divert attention from the severe problems that Americans face. She reveals the real victims of poverty–the millions of children who suffer from societal neglect, inferior education, inadequate health care, hunger, and homelessness.

Anyway, it was fashionable in the 1990s to line up the trend toward unmarried parenting with any other time series showing things getting worse. You can see why they don’t do that so much any more: 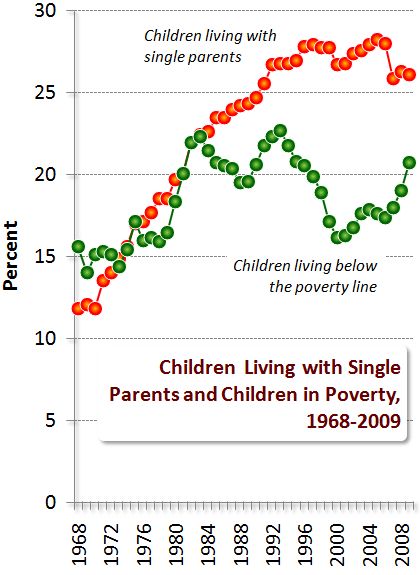 Source: My graph from the Census Bureau’s poverty and living arrangements data. These are spreadsheet files — (if you think I’m messing with the data, feel free to show me another interpretation — I’ll post it here.)*

The rise in child poverty in the1970s and early 1980s did not persist, while the single-parent living situation kept going up (similarly, crack-use and homicide declined, too). It looks like the culprits after the 1980s are recessions, and the improvement is concentrated in the miracle 1990s, driven by some combination of economic growth, the expansion of the Earned Income Tax Credit, and welfare reform forcing single mothers to “work.”

Of course, single parents are still more likely to live in poverty. One thing I liked about the old welfare system was that at least it gave some money to poor people. But that was then.

For a recent review of the facts and policies around single parents, welfare, and poverty, I recommend an article in the 2010 Annual Review of Sociology by Sandra Danziger. Since it’s behind a pay wall, I’ll fair-use a couple of the figures for you here.

This figure shows only single mothers ages 18-54 with only high school diplomas or less education. The economic boom and/or radical reforms are apparent in the late 1990s, as these mothers increased their employment rates while falling drastically off welfare. (The economic boom theory is bolstered by the rise in “no work/no welfare” and the downward slide of employment after 2000. )

The next figure is for those who thought I didn’t do enough with race/ethnicity last time. This figure nicely shows both the trends in child poverty rates and the inequalities by race/ethnicity. 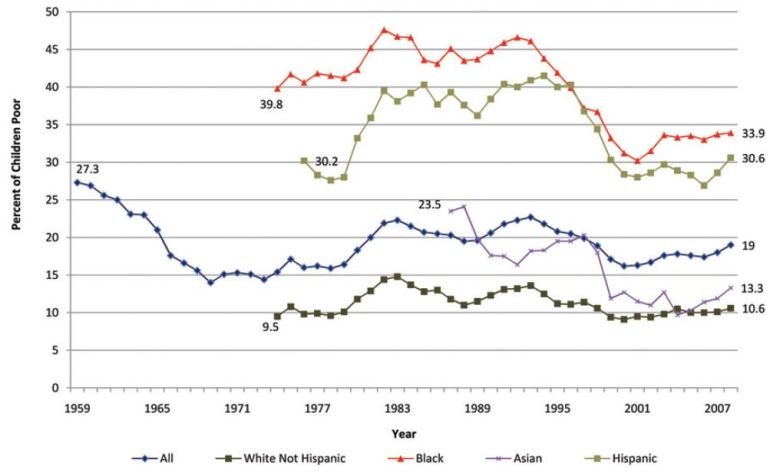 In particular, several readers of the Sociological Images repost of a figure I did on income-to-needs distributions thought it a problem that I had neglected to include Asians. I did that because of my view that they are not well captured in the Current Population Survey (CPS), too small and diverse and geographically concentrated in ways that intersect with national origin and mess up the sampling. (For example, they are very concentrated in places with high incomes and costs of living, like Hawaii and parts of the West.) Anyway, Asian child poverty is on here since the mid-1980s. My skepticism about the data is reinforced by the big blips around the Decennial Census years of 1990 and 2000, when the statistical weights in the CPS are adjusted to reflect the more accurate national count.

*The drop in single parents in 2007 reflects a change in the definition: before 2007 Census only identified one parent, then reported there were two parents if that person was married. Now they identify two parents whether or not they are married. So instead of “single parents” for 2007 forward, it is really counting “one parent.”