The U.S. Census Bureau has released its new report on childcare. This provides a good followup treatment for the hyperventilation induced by fear of fathers taking over (or being relegated to) childcare.*

First, the trend that fits my story of stalled gender progress. Among married fathers with employed wives, how many are providing the “primary care” for their children? That is, among the various childcare arrangements the children are in while their mother is at work, how many are in their fathers’ care more than in any other arrangement? Answer: 10%, which is virtually unchanged from a quarter-century ago: 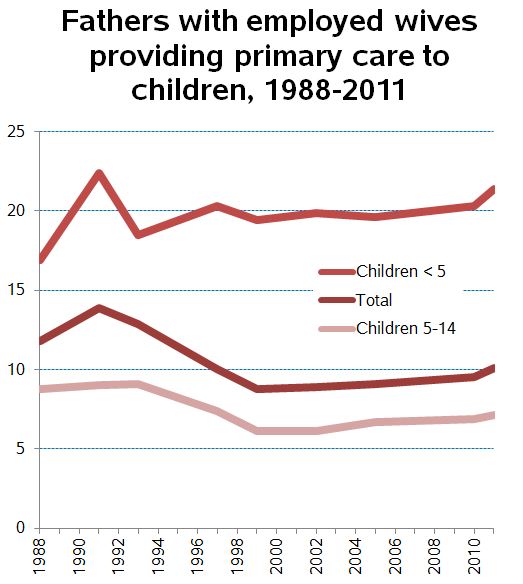 Source:  U.S. Census Bureau, Who’s Minding the Kids? Child Care Arrangements: Spring 2011. (There was a methodology change in 1997, before which Census asked parents to name their primary arrangement, which they now calculate from the hours in each arrangement.)

Not a lot of change for a quarter century in which we’re told everything has changed.

However, in fairness to the change-is-happening community, here is the trend for the percentage of fathers who say they are providing ANY care to their children while their mothers were at work.

I don’t give this much weight since it might reflect greater sensitivity to the importance of saying fathers provide care, but there you have it: it’s higher, and it shows some increases up until the early 1990s, which is when gender equality in general stalled on many indicators. Since the mid-1990s: Nothing.

Please note these figures don’t show the total contribution of fathers, but only reflects those married with children, whose wives are employed.

One interesting source of father care is mothers’ shiftwork. As Harriet Presser reported two decades ago, the 24/7 economy stimulates some task sharing among couples. In the current report, the Laughlin writes:

Preschoolers whose mothers worked nights or evenings were more likely to have their father as a child care provider than those with mothers who worked a day shift (42 percent and 23 percent, respectively)

* The report was written by Lynda Laughlin — have you credited a government bureaucrat by name for something valuable they did today?

7 thoughts on “Father care: The more things don’t change, the more they stay the same”