This paper by Anne Case and Angus Deaton, one of whom just won a Nobel prize in economics, reports that mortality rates are rising for middle-aged non-Hispanic Whites. It’s gotten tons of attention (see e.g., “Why poor whites are dying of despair” in The Week, and this in NY Times).

It’s an odd paper, though, in its focus on just one narrow age group over time. The coverage mostly describes the result as if conditions are changing for a group of people, but the group of people changes every year as new 45-year-olds enter and 54-year-olds leave. That means the population studied is subject to change in its composition. This is especially important because the Baby Boom wave was moving through this group part of that time. The 1999-2013 time frame included Baby Boomers (born 1945-1964) from age 35 to age 68.

My concern is that changes in the age and sex composition of the population studied could account for a non-trivial amount of the trends they report.

For example, they report that the increased mortality is entirely concentrated among those non-Hispanic White men and women who have high school education or less. But this population changed from 1999 to 2013. Using the Current Population Survey — which is not the authority on population trends, but is weighted to reflect Census Bureau estimates of population trends — I see that this group became more male, and older, over the period studied. That’s because the Baby Boomers moved in, causing aging, the population reflects women’s advances in education, relative to men, circa the 1970s. Here are those trends:

It’s odd for a paper on mortality trends not to account for account for sex and age composition changes in the population over time. Even if the effects aren’t huge, I think that’s just good demography hygiene. Now, I don’t know exactly how much difference these changes in population composition would make on mortality rates, because I don’t have the mortality data by education. That would only make a difference if the mortality rates differed a lot by sex and age.

However, setting aside the education issue, we can tell something just looking at the whole non-Hispanic White population, and it’s enough tor raise concerns. In the overall 45-54 non-Hispanic White population, there wasn’t any change in sex composition. But there was a distinct age shift. For this I used the 2000 Census and 2013 American Community Survey. I could get 1999 estimates to match Case and Deaton, but 2000 seems close enough and the Census numbers are easier to get. (That makes my little analysis conservative because I’m lopping off one year of change.) 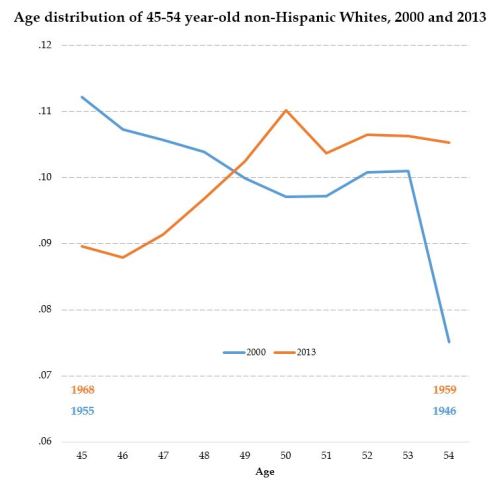 That shocking drop at age 54 in 2000 reflects the beginning of the Baby Boom. In 2000 there were a lot more 53-year-olds than there were 54-year-olds, because the Baby Boom started in 1946. (Remember, unlike today’s marketing-term “generations,” the Baby Boom was a real demographic event.) So there was a general aging, but also a big increase in 54-year-olds, between 2000 and 2013, which will naturally increase the mortality rate for that year.

So, to see whether the age shift had a non-trivial impact on the number of deaths in this population, I used one set of mortality rates: 2010 rates for non-Hispanic Whites by single year of age, published here. And I used the age and sex compositions as described above (even though the sex composition barely changed I did it separately by sex and summed them).

Here is what Case and Deacon say:

So, it looks to me like age composition change accounts for about half of the rise in mortality they report. They really should have adjusted for age.

Here is my spreadsheet table (you can download the file here): 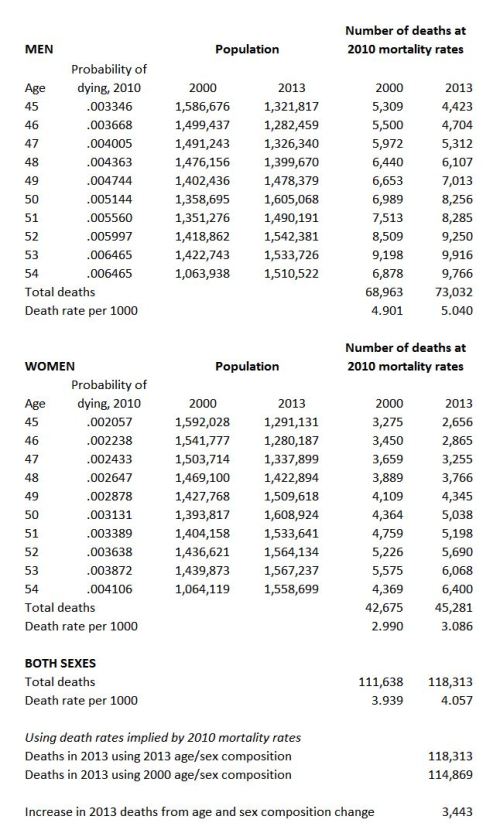 As always, happy to be credited if I’m right, and told if I’m wrong. But if you just have suggestions for more work I could do, that might not work.

Follow up: Andrew Gelman has three excellent posts about this. Here’s the last.