The one big thing that might doom Trump in November

The other day I wondered what issues offered potential for the left-side party to raid the right-side for some voters. But that’s abstract compared to this actual election. This is my thought on what happens if it comes down to Trump and Clinton.

John Cassidy at the New Yorker runs through some speculation about how Trump could win a general election. It seems to boil down to bringing in enough White working-class voters to win Rustbelt states that Obama won like Michigan (Obama +9.5%), Pennsylvania (Obama +5.2%), and Ohio (Obama +1.9%). Setting aside his prospects among Whites, I’m very skeptical he can win those states (or some others) with basically no Black and very few Latino votes.

To show the depth of ill will between Trump and African Americans, here are the feeling thermometer distributions from the 2016 ANES Pilot Study, taken in late January. People were asked to rate candidates from 0 (very cold, unfavorable) to 100 (very warm, favorable). 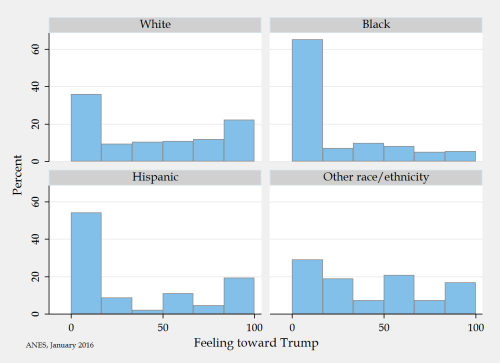 Lots of people hate Trump, but no group hates him like African Americans (other variables, like age and education, perform as expected, but nothing is as strong). Obama got something more than 90% of Black vote in 2012. It’s hard to see even 10% of Black voters going for Trump. Especially given Hillary Clinton as an opponent. She might not inspire the same turnout as Obama, but she’s very popular among Black voters. Here are her thermometers: 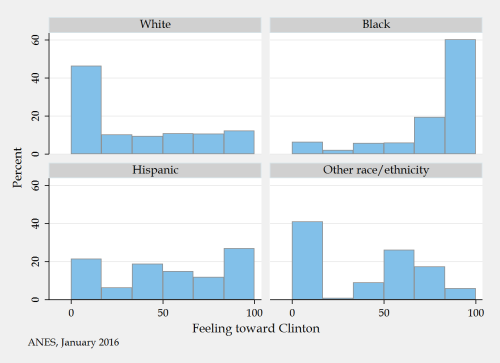 That Black Clinton thermometer is a basically a mirror-image of the one for Trump. The poor feeling toward Clinton among Whites is obviously a problem, but I still think Blacks and Hispanics can sink Trump.

For what it’s worth, the racial feeling seems mutual. ANES also asked the feeling thermometer about Blacks. Here are the White feelings toward Blacks, adjusted for age, gender, and education level — according to their feelings toward Trump: 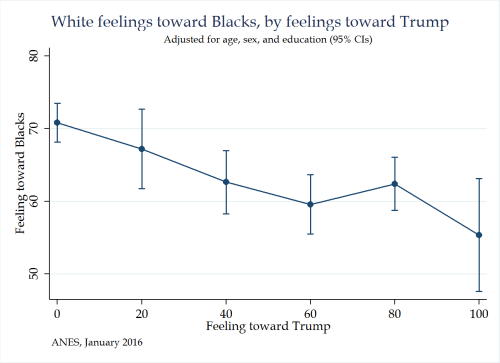 The linear trend, which is highly significant, is about one-eighth of a point down on Blacks for every point up on Trump. That’s America for you – even though Trump is mostly going after immigrants and Muslims in this election, racism is always also about the Black-White thing.

Disclaimer: I’m not a political polling expert, this isn’t real research and it hasn’t been reviewed, and I could be completely wrong.