In a paywalled 2013 paper in Journalism Studies, the team used an analysis of names appearing in newspapers to report the gender composition of people mentioned. They analyzed the New York Times back to 1880, and then a larger sample of 13 newspapers from 1982 through 2005. Here’s one of their figures:

The 2013 paper was a descriptive analysis, establishing that men are mentioned more than women over time.

In a paywalled 2014 article in Social Science Quarterly (SSQ) the team followed up. Except for a string-cite mention in the methods section, the second paper makes no reference to the first, giving no indication that the two are part of a developing project. They use this figure to motivate the analysis in the second paper, with no acknowledgment that it also appeared in the first:

How can we account for the consistency of these disparities? One possible factor that may explain at least some of these consistent gaps may be the political agendas and choices of specific newspapers.

After analyzing the data, they concluded:

The proposition that liberal newspapers will be more likely to cover female subjects was not supported by our findings. In fact, we found a weak to moderate relationship between the two variables, but this relationship is in the opposite direction: Newspapers recognized (or ranked) as more “conservative” were more likely to cover female subjects than their more “liberal” counterparts, especially in articles reporting on sports.

They offered several caveats about this finding, including that the measure of political slant used is “somewhat crude.”

Clearly, much more work to be done. The next piece of the project was a 2015 article in American Sociological Review (which, as the featured article of the issue, was not paywalled by Sage). Again, without mentioning that the figure has been previously published, and with one passing reference to each of the previous papers, they motivated the analysis with the figure: 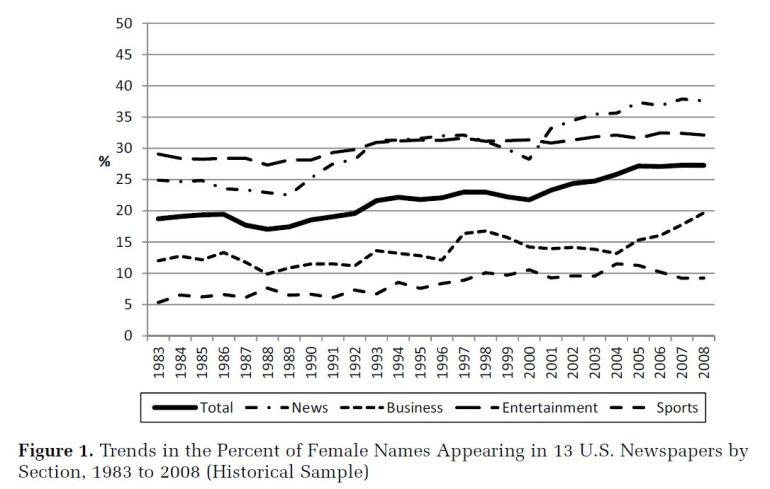 Besides not getting the figure in color, ASR readers for some reason also don’t get 1982 in the data. (The paper makes no mention of the difference in period covered, which makes sense because it never mentions any connection to the analysis in the previous paper). The ASR paper asks of this figure, “How can we account for the persistence of this disparity?”

By now I bet you’re thinking, “One way to account for this disparity is to consider the effects of political slant.” Good idea. In fact, in the depiction of the ASR paper, the rationale for this question has hardly changed at all since the SSQ paper. Here are the two passages justifying the question.

Former anecdotal evidence on the relationship between newspapers’ political slant and their rate of female-subjects coverage has been inconclusive. … [describing studies by Potter (1985) and Adkins Covert and Wasburn (2007)]…

Notwithstanding these anecdotal findings, there are a number of reasons to believe that more conservative outlets would be less likely to cover female subjects and women’s issues compared with their more liberal counterparts. First, conservative media often view feminism and women’s rights issues in a relatively negative light (Baker Beck, 1998; Brescoll and LaFrance, 2004). Therefore, they may be less likely to devote coverage to these issues. Second, and related to the first point, conservative media may also be less likely to employ female reporters and female editors […]. Finally, conservative papers may be more likely to cover “hard” topics that are traditionally (that is, conservatively) considered to be more important or interesting, such as politics, business, and sports, and less likely to report on issues such as social welfare, education, or fashion, where according to research women have a stronger presence (Holland, 1998; Ross, 2007, 2009; Ross and Carter, 2011).

Some work suggests that conservative newspapers may cover women less (Potter 1985), but other studies report the opposite tendency (Adkins Covert and Wasburn 2007; Shor et al. 2014a).

Notwithstanding these inconclusive findings, there are several reasons to believe that more conservative outlets will be less likely to cover women and women’s issues compared with their more liberal counterparts. First, conservative media often view feminism and women’s issues in a relatively negative light (Baker Beck 1998; Brescoll and LaFrance 2004), making them potentially less likely to cover these issues. Second, and related to the first point, conservative media may also be less likely to employ female reporters and female editors. Finally, conservative papers may be more likely to cover “hard” topics that are traditionally considered more important or interesting, such as politics, business, and sports, rather than reporting on issues such as social welfare, education, or fashion, where women have a stronger presence.

Except for a passing mention among the “other studies,” there is no connection to the previous analysis. The ASR hypothesis is:

Conservative newspapers will dedicate a smaller portion of their coverage to females.

On this question in the ASR paper, they conclude:

our analysis shows no significant relationship between newspaper coverage patterns and … a newspaper’s political tendencies.

It looks to me like the SSQ and ASR they used the same data to test the same hypothesis (in addition to whatever else is new in the third paper). Given that they are using the same data, how they got from a “weak to moderate relationship” to “no significant relationship” seems important. Should we no longer rely on the previous analysis? Or do these two papers just go into the giant heap of studies in which “some say this, some say that”? What kind of way is this to figure out what’s going on?

It’s fine to report the same findings in different venues and formats. It’s fine, that is, as long as it’s clear they’re not original in the subsequent tellings. (I personally have been known to regale my students, and family members, with the same stories over and over, but I try to remember to say, “Stop me if I already told you this one” first.)

I’m not judging Shor et al. for any particular violation of specific rules or norms. And I’m not judging the quality of the work overall. But I will just make the obvious observation that this way of presenting ongoing research is wasteful of resources, misleading to readers, and hinders the development of research.

When making (or hearing) arguments against open science as impractical or unreasonable, just weigh the wastefulness, misleadingness, and obstacles to science so prevalent in the current system against whatever advantages you think it holds. We can’t have a reasonable conversation about our publishing system based on the presumption that it’s working well now.

In an open science system researchers publish their work openly (and free) with open links between different parts of the project. For example, researchers might publish one good justification for a hypothesis, with several separate analyses testing it, making clear what’s different in each test. Reviewers and readers could see the whole series. Other researchers would have access to the materials necessary for replication and extension of the work. People are judged for hiring and promotion according to the actual quality and quantity of their work and the contribution it makes to advancing knowledge, rather than through arbitrary counts of “publications” in private, paywalled journals. (The non-profit Center for Open Science is building a system like this now, and offers a free Open Science Framework, “A scholarly commons to connect the entire research cycle.”)

There are challenges to building this new system, of course, but any assessment of those challenges needs to be clear-eyed about the ridiculousness of the system we’re working under now.