Thinking about how to study color on kids.

Color is everywhere; gender is everywhere; color and gender have a varied, changing, and hard-to-pin-down relationship, which nevertheless creates powerful, explicit and implicit signals by and for both the people who apply colors (to their kids, themselves, their cars) and those who see them (including themselves). Discuss?

Naming and choosing colors has a subjective component, as Randall Munroe showed in his xkcd color survey.

I’ve written a few posts about gender and color, and conducted a simple “what’s your favorite color?” survey, which turned up these results for the first 1,695 respondents, the vast majority from a university-sponsored email blast to faculty, staff and students: 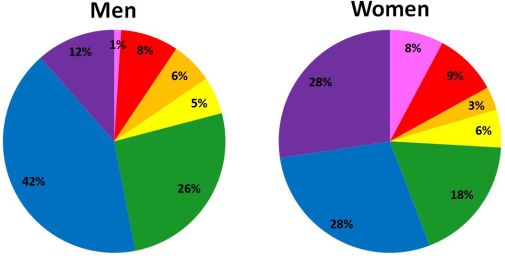 (The survey is still up if you want to take it — click the picture — but I’ve already pulled out a sample for analyzing.)

I labeled these colors blue, green, orange, yellow, red, purple and pink, but also showed the colors on the screen to try to triangulate visual and verbal definitions. Still, a few people added comments such as, “I usually like green, but not this one.”

In the old days, some surveys have simply asked people to name their favorite colors. Silver and colleagues (Perceptual and Motor Skills 1988, 66:295-99) used that method in 1988 in a survey of undergraduates, and got these results: 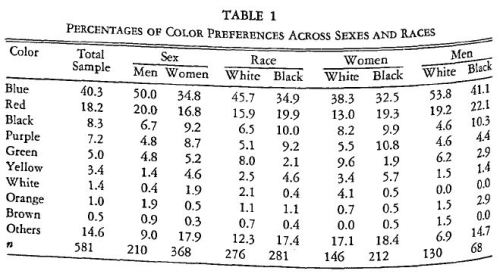 “Others” included pink, which for some reason they didn’t list separately, even though it was about half the “others” in the case of women. Ironically, Black and White appear as colors on the row labels, and as races on the column labels. (I didn’t include those in my survey, because when I was a kid some other kid told me they weren’t really colors. Now I capitalize them when referring to races, since those definitely aren’t really colors.)

Anyway, nowadays, you get fancy color analyses with infants’ eye movements recorded (no gender difference found), or rapid on-screen comparisons showing adults many different colors, analyzed (obviously) according to the “neural dimensions that underlie color coding in the human visual system” rather than specific color names such as “pink.”

Many people are concerned that we are creating color preferences in children by dressing them according to gender stereotypes. I also believe — and may yet (spoiler alert) show — that the colors on and around children also affect their parents’ attitudes toward color (see, e.g., Pinkalicious, a product line that I’m betting is more common in homes with daughters). How could this not do something to the parents? 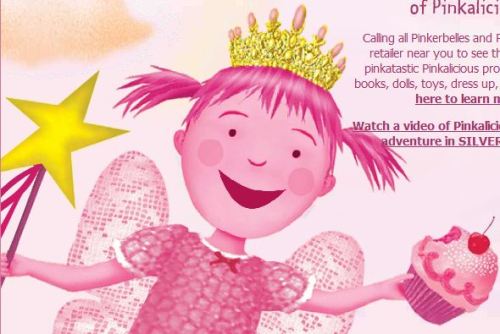 To make a short story long, with the recent news of Disney moving its product lines into the delivery room, I was wondering how one could study the application of colors by parents to their children in real life.

Just to try something, I looked at the first 20 boys and 20 girls on the “most recent” list of photo albums at babyzone.com. I used a free eye-dropper program to select a swatch from each kids outfit (first picture that showed visible color either on the clothes or the blanket), trying to pick the color that took up the greatest space (not counting white). After the eye-dropper gave me the color codes, I dropped them into this web-color utility, to get a pure color sample. I figure you could show these to people, like xkcd did, and ask them to name the colors, something like that.

Some of them were easy, like the first kid. The second one required deciding which color was most prevalent. 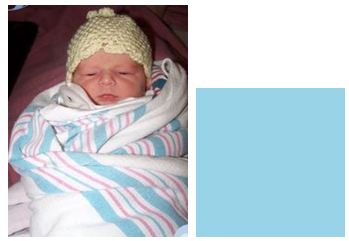 It was also a little tricky deciding which pixel to select, since there are shadows, spots, etc. So it’s not as easy as if you had a single-colored fabric stretched out in set light conditions. And in some cases the mix of colors was too much, and I just couldn’t pick one that was most prevalent. Here’s what it looks like: 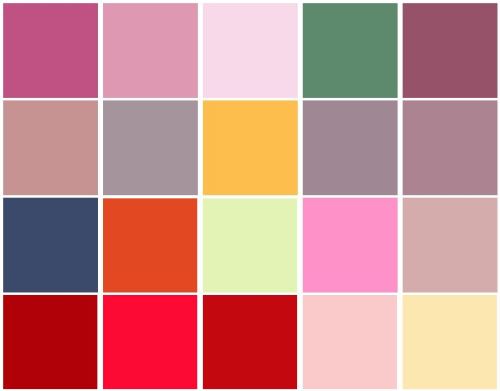 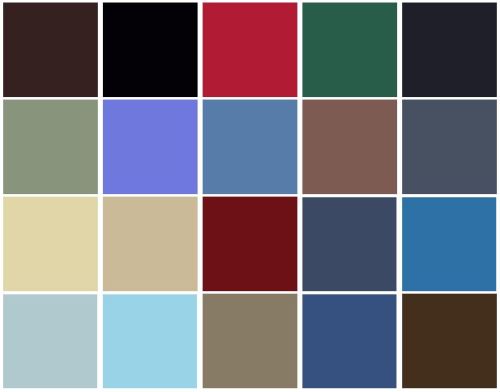 6 responses to “Doing color with babies”