I’m getting hundreds of clicks today from someone who posted a comment on David Brooks’ column (a sliver of a fraction of a percent of his readers). So here’s a little detail.

Men still dominate the tippy-top of the corporate ladder because many women take time off to raise children, but women lead or are gaining nearly everywhere else. Women in their 20s outearn men in their 20s.

The first sentence is too slippery to fact-check. But I think it would be more accurate to say, and less slippery: “men dominate at all levels of the corporate ladder, and women having children is only part of the reason why.”

But anyways, the second sentence is a specific empirical claim, and it is not true.

If Brooks’s intern — or (shudder) a fact-checker at a newspaper — had typed this into Google they would know: “bls earnings by age and sex”. As of today, that search leads to this as the second link:

This is not an obscure source. Finding it hardly counts as research. If you opened it, you would see the median earnings for men and women, by age, race and ethnicity, for full-time workers. If you copied a couple of those columns into your spreadsheet and asked it for the ratio of the medians, this is what you would see: Men earn more at every age. 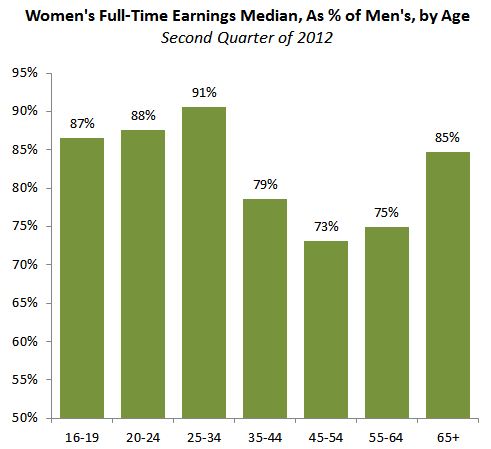 I know the history of this factoid meme, which is detailed here and here. What he is quoting is probably a Hanna Rosin (or Liza Mundy) misquote of an analysis which compared 22-30-year-old, never-married, childless, metro-area residents a few years ago.

But there is being succinct and punchy, and there is being wrong. Shortening “22-30-year-old, never-married, childless, metro-area residents” to “women in their 20s” is wrong.