David Leonhardt at the NYTimes Uphsot has a piece up on the rate of children living with married parents across states. It’s superficial and unhelpful, based as it is off a blog post by Brad Wilcox and Nicholas Zill.

It reads, in part:

When it comes to family arrangements, the United States has a North-South divide. Children growing up across much of the northern part of the country are much more likely to grow up with two parents than children across the South. … These patterns — which come from a new analysis of census data — are important because evidence suggests that children usually benefit from growing up with two parents. It’s probably not a coincidence, for instance, that the states with more two-parent families also have higher rates of upward mobility.

And there is this map:

Leonhardt really should spend more time looking at maps of the racial distribution. Anyway, he doesn’t quote the Wilcox & Zill conclusion, which is this:

The relationship is modest but statistically significant. For every ten-point increase in the Red State Index, the proportion of teens living with both parents rises by one percentage point. This suggests that red state family culture is associated with increased odds of being raised in an intact, married family.

That is an impressive level of wrong, and overreach, based on an analysis at the state level with 5 variables (% with BA, 5 Black, Hispanic, and Asian, and a red/blue voting index).

States do “matter,” of course, and there is a literature going back decades on regional variation in family demography and inequality. Sorry I don’t have time this morning to make a lit review — feel free to put links in the comments. But for whether or not a child lives with both married parents, race/ethnicity and education — indicators of America’s unique brand of inequality — explain the pattern much better than some amorphous “state family culture.”

Leonhardt likes to be very post-racial, for example happily repeating Chetty results for single-motherhood effects on mobility that don’t control for race (see here). And he does that again here:

Mr. Wilcox and Mr. Zill also point out that two-parent families tend to be more common in states with predominantly white populations. But race is hardly the only explanation for the patterns. White single-parent families have become much more common in recent years. And in the Deep South, single parenthood is common among both whites and blacks.

But that’s facile and misleading. Who would say race is “the only explanation”? And “common among both whites and blacks” doesn’t mean close to equal.

Anyway, doing this at the state level is not optimal (although it is the kind of thing I have done plenty when I’m being superficial or illustrating something I know is actually true). White college graduates in the South look a lot more like White college graduates in the North, when it comes to family structure, than they do to poor Blacks in the South. And if states “matter,” it’s much more through their legacies of racial inequality and educational underinvestment. To illustrate this, I put the following regression table on Twitter, reflecting an entire half hour of work — from data download through table construction — partly to show how superficial as well as wrong the Wilcox/Leonhardt analysis is. It shows that if you know the race/ethnicity and education of a child’s parents, further knowing the state they live in gives you virtually no better chance of predicting whether their parents are married.

That R-squared tells you the variance explained, and it moves less than 1% when you add the state fixed effects (though it gives you a full 1% when there are no other variables in the model).

As I said on Twitter, maybe the most common problem in bivariate data-science journalism is mistaking visual descriptive power (e.g., state map) for explanatory power. The alternative is to read some more, then spend a little more time with the data, and consult with honest experts.

Sorry I don’t have more time to write this morning.

Someone on Twitter said I should talk about effect sizes instead of variance explained. That’s reasonable. To illustrate this I added an interaction term between state and parent-BA, and calculated marginal effects. The education effect on having married parents is 39% overall, and ranges from 27% to 50% across states. On the other hand, states have a range of 13% for kids with a BA-holding parent, and 28% for kids with a BA-holding parent. To illustrate what this means: There is only only state move that would lead to a bigger difference in predicted chance of parents being married than the smallest education effect. So moving from Maine or Rhode Island to Utah — for kids without BA-holding parents — has a bigger predicted effect than having your parents get a BA in Utah. Except for that comparison, having a BA-holding parent has a bigger predicted effect than any state move. 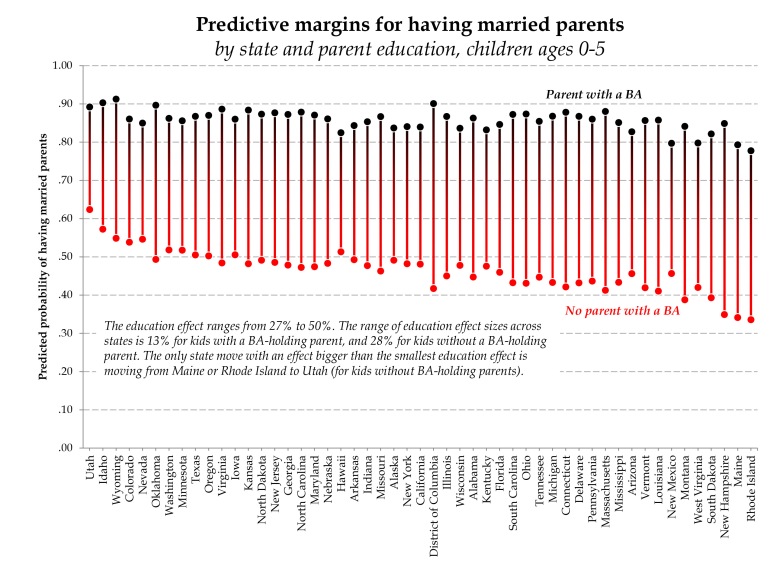 I didn’t do race effects across states, but for comparison: the overall Black effect is 31%.

4 thoughts on “Upshot sells Wilcox, but I’m not buying”