What does race have to do with mobility? The words “race,” “black,” or “African American” don’t appear in David Leonhardt’s report on the new Chetty et al. paper on intergenerational mobility that hit the news yesterday. Or in Jim Tankersley’s report in the Washington Post, which is amazing, because it included this figure: 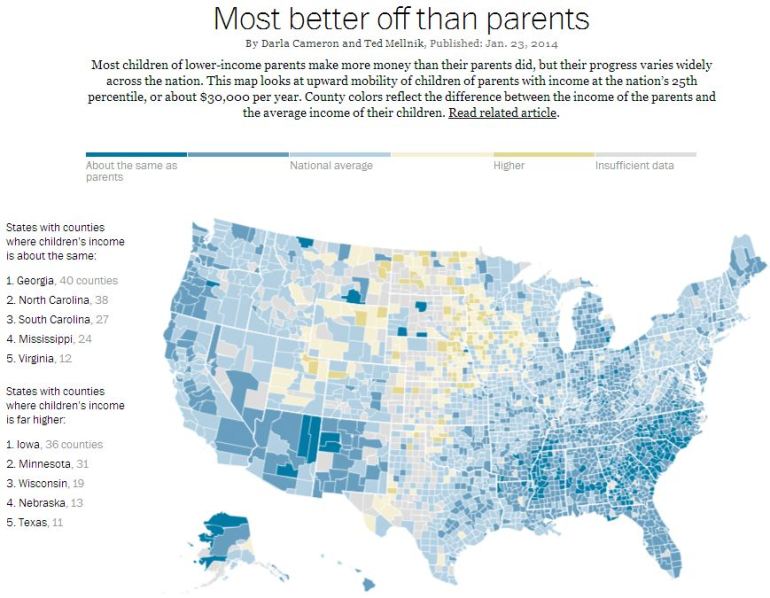 That’s not exactly a map of Black America, which the Census Bureau has produced, but it’s not that far off: 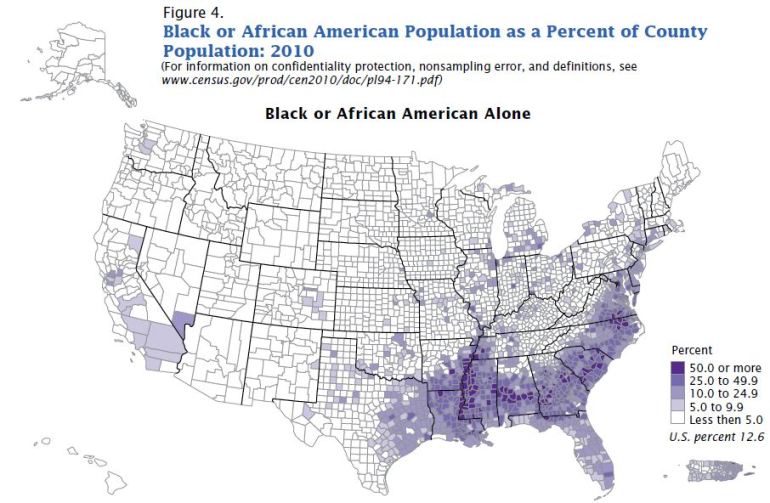 But even if you don’t look at the map, what if you read the paper? Describing the series of maps of intergenerational mobility, the authors write:

Here is that Figure IXa, which plots Black population composition and mobility levels for groups of commuting zones:

Yes, race is an important part of the story. In a nice part of the paper, the authors test whether Black population size is related to upward mobility for Whites (or, people in zip codes that are probably White, since race isn’t in their tax records), and find that it is. It’s not just Blacks driving the effect. I’m thinking about the historical patterns of industrial development, land ownership, the backwardness of racist elites in the South, and so on. But they’re not. For some reason, not explained at all, Chetty et al. offer this pivot:

The main lesson of the analysis in this section is that both blacks and whites living in areas with large African-American populations have lower rates of upward income mobility. One potential mechanism for this pattern is the historical legacy of greater segregation in areas with more blacks. Such segregation could potentially affect both low-income whites and blacks, as racial segregation is often associated with income segregation. We turn to the relationship between segregation and upward mobility in the next section.

And that’s it, they don’t discuss Black population size again, instead only focusing on racial segregation. They don’t pursue this “potential mechanism” in the analysis that follows. Instead, they drop percent Black for racial segregation. I have no idea why, especially considering this Table VII, which shows unadjusted (and normalized) correlations (more or less) between each variable and absolute upward mobility (the variable mapped above):

In these normalized correlations, fraction Black has a stronger relationship to mobility than racial segregation or economic segregation! In fact, it’s just about the strongest relationship on the whole long table (except for single mothers, with which it is of course highly correlated). So why do they not use it in their main models? Maybe someone else can explain this to me. (Full disclosure, my whole dissertation was about this variable.)

This is especially unfortunate because they do an analysis of the association between commuting zone family structure (using macro-level variables) and individual-level mobility, controlling for marital status — but not race — at the individual level. From this they conclude, “Children of married parents also have higher rates of upward mobility if they live in communities with fewer single parents.” I am quite suspicious that this effect is inflated by the omission of race at either level. So they write the following, which goes way beyond what they can find in the data:

Hence, family structure correlates with upward mobility not just at the individual level but also at the community level, perhaps because the stability of the social environment affects children’s outcomes more broadly.

I explored the percent Black versus single mother question in a post a few weeks ago using the Chetty et al. data. I did two very simple OLS regression models using only the 100 largest commuting zones, weighted for population size, the first with just single motherhood, and then a model with proportion Black added:

This shows that the association between single motherhood rates and immobility is reduced by two-thirds, and is no longer significant at conventional levels, when percent Black is added to the model. That is: Percent Black statistically explains the relationship between single motherhood and intergenerational immobility across U.S. labor markets. That’s not an analysis, it’s just an argument for keeping percent Black in the more complex models. Substantively, the level of racial segregation is just one part of the complex race story — it measures one kind of inequality in a local area, but not the amount of Black, which matters a lot (I won’t go into it all, but here are three old papers: one, two, three.

The burgeoning elite conversation about economic mobility, poverty, and inequality is good news. It’s avoidance of race is not.

23 thoughts on “Where is race in the Chetty et al. mobility paper?”