For social relationships outside marriage

Stephanie Coontz has a great piece in tomorrow’s New York Times titled, “For a Better Marriage, Act Like a Single Person.” From her intro:

Especially around Valentine’s Day, it’s easy to find advice about sustaining a successful marriage, with suggestions for “date nights” and romantic dinners for two. But as we spend more and more of our lives outside marriage, it’s equally important to cultivate the skills of successful singlehood. And doing that doesn’t benefit just people who never marry. It can also make for more satisfying marriages.

From there she develops the case with, as usual, a lot of the right research. Well worth a read.

No matter how much Americans may value marriage, we now spend more time living single than ever before. In 1960, Americans were married for an average of 29 of the 37 years between the ages of 18 and 55. That’s almost 80 percent of what was then regarded as the prime of life. By 2015, the average had dropped to only 18 years.

In many ways, that’s good news for marriages and married people. Contrary to some claims, marrying at an older age generally lowers the risk of divorce. It also gives people time to acquire educational and financial assets, as well as develop a broad range of skills — from cooking to household repairs to financial management — that will stand them in good stead for the rest of their lives, including when a partner is unavailable.

The first figure, the average years spent in marriage between the ages of 18 and 55 is very easy to calculate. You just sum the proportion of people married at each age. Here’s what it looks like, comparing 1960 (from the decennial Census) and 2015 (from the American Community Survey), both from IPUMS.org (click to enlarge):

I think it’s a nice, simple way to show the declining footprint of marriage in American life. (I first did this, and described in the rationale, in 2010.) 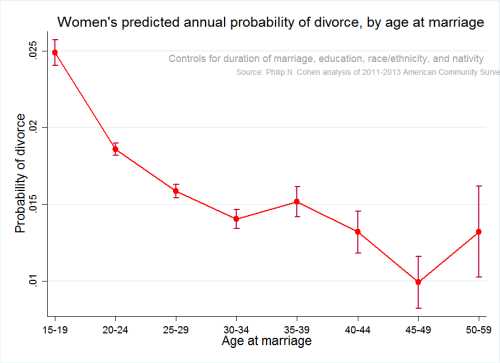 There’s more discussion in the post, as well as in this followup post, which has this cool figure, where red is the highest odds of divorce and green is the lowest, and the axes are years married and age at marriage (click to enlarge):

My new book is out! Enduring Bonds: Inequality, Marriage, Parenting, and Everything Else That Makes Families Great and Terrible. Available all the usual places, plus here at the University of California Press, where Chapter 1 is available as a sample, and where instructors can request a review copy.

One response to “For social relationships outside marriage”