Please don’t give (or take) stupid advice from analyses like this.

Since yesterday, Nick Wolfinger and Brad Wilcox have gotten their marriage age analysis into the Washington Post Wonkblog (“The best age to get married if you don’t want to get divorced”) and Slate (“The Goldilocks Theory of Marriage”). The marriage-promotion point of this is: don’t delay marriage. The credulous blogosphere can’t resist the clickbait, but the basis for this is very weak.

Yesterday I complained about Wolfinger pumping up the figure he first posted (left) into the one on the right:

Today I spent a few minutes analyzing the American Community Survey (ACS) to check this out. Wolfinger has not shared his code, data, models, or tables, so it’s hard to know what he really did. However, he lists a number of variables he says he controlled for using the National Survey of Family Growth: “sex, race, family structure of origin, age at the time of the survey, education, religious tradition, religious attendance, and sexual history, as well as the size of the metropolitan area.”

The ACS seems better for this. It’s very big, so I can analyze just the one-year incidence of divorce (did you get divorced in the last year?), according to the age at which people married. I don’t have family structure of origin, religion, or sexual history, but he says those don’t influence the age-at-marriage effect much. He did not control for duration of marriage, which is messed up in his data anyway because of the age limits in the NSFG.

So, in my model I used women in their first marriages only, and controlled for marriage duration, education, race, Hispanic ethnicity, and nativity/citizenship. This is similar to models I used in this (shock) peer-reviewed paper. Here are the predicted probabilities of divorce, in one year, holding those control variables constant. 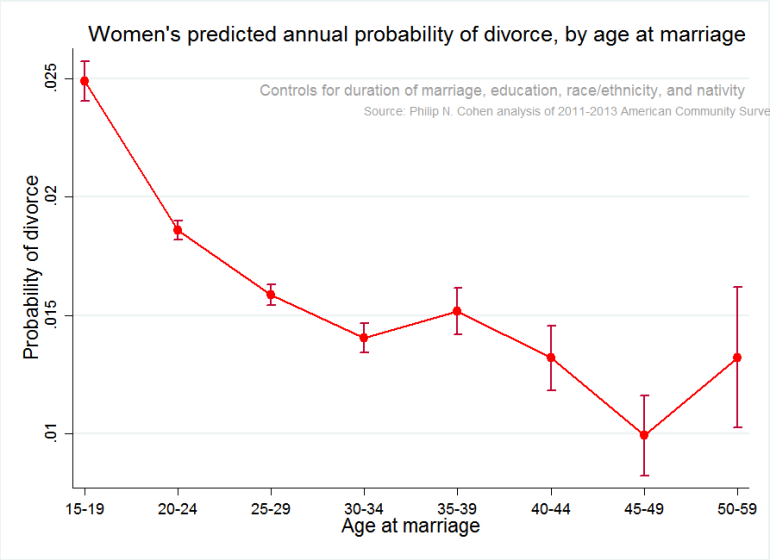 Yes, there is a little bump up for the late 30s compared with the early 30s, but it’s very small.

Closer analysis (added to the post 7/19), generated from a model with age-at-marriage–x–marital duration interactions, shows that the late-30s bump is concentrated in the first five years of marriage:

This doesn’t much undermine the “conventional wisdom” that early marriage increases the risk of divorce. Of course, this should not be the basis for advice to people who are, say, dating a person they’re thinking of marrying and hoping to minimize chance of divorce.

If you want to give advice to, say, a 15-year-old woman, however, the bottom line is still: Get a bachelor’s degree. You’ll likely earn more, marry later, and have fewer kids. If you or your spouse decide to get divorced after all that, it won’t hurt that you’re more independent. For what it’s worth, here are the education effects from this same model: 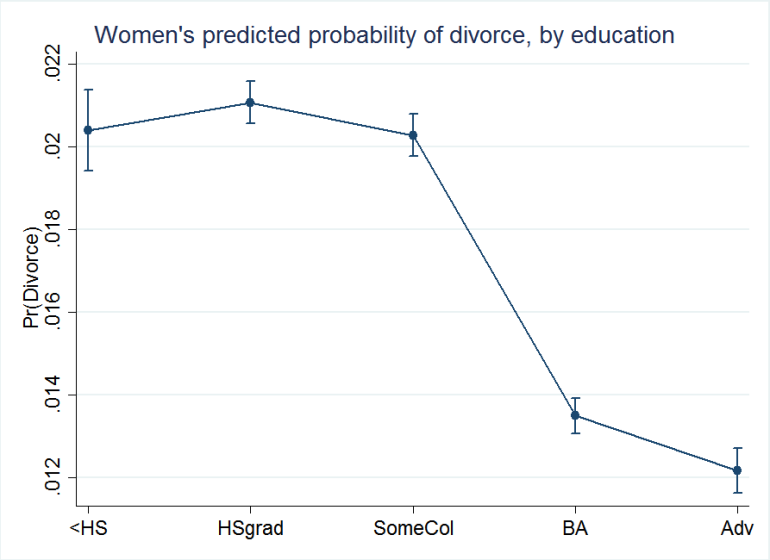 (The codebook for my IPUMS data extraction is here, my Stata code is here.)

Anyway, it’s disappointing to see this in the Wonkblog piece:

But the important thing, for Wolfinger, is that “we do know beyond a shadow of a doubt that people who marry in their thirties are now at greater risk of divorce than are people who wed in their late twenties. This is a new development.”

That’s just not true. I wouldn’t swear by this quick model I did today. But I would swear that it’s too early to change the “conventional wisdom” based only on a blog post on a Brad-Wilcox-branded site.

One interesting issue is the problem of age at marriage and education. They are clearly endogenous — that is, they influence each other. Women delay marriage to get more education, they stop their education when they have kids, they go back to school when they get divorced — or think they might get divorced. And so on. And, for the regression models, there are no highly-educated people getting married at really young ages, because they haven’t finished school yet. On the other hand, though, there are lots of less-educated people getting married for the first time at older ages. Using the same ACS data, here are two looks at the women who just married for the first time, by age and education.

First, the total number per year: 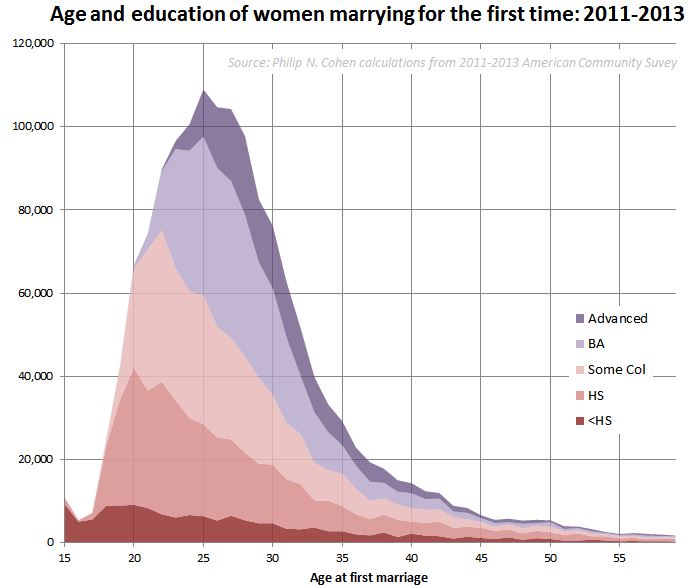 Then, the percent distribution of that same data: 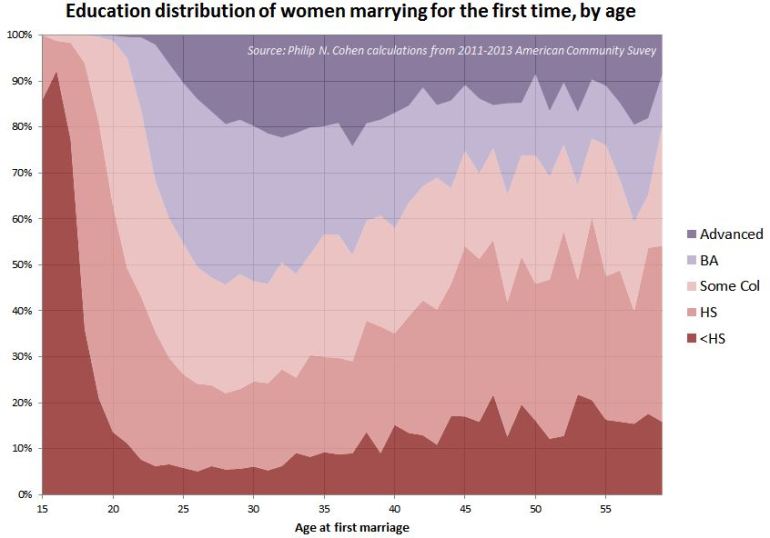 Interesting thing here is that college graduates are only the majority of women getting married for the first time in the age range 27-33. Before and after that most women have less than a BA when they marry for the first time. This is also complicated because the things that select people into early marriage are sometimes but not always different from those that select people into higher education. Whew.

It really may not be reasonable to try to isolate the age-at-marriage effect after all.

32 thoughts on “No, you should get married in your late 40s (just kidding)”